Ten years ago, Van Halen released A Different Kind of Truth, their first studio album with lead singer David Lee Roth since 1984.  That year, I befriended a coworker who was as much a fan of the band as I was.  His name was Nick, and he had been touring with the band for many years.  Prior to his trip to Louisville, Kentucky, for the first concert of the tour, I asked him if he would be willing to have Eddie Van Halen autograph a photo for me.  Nick was an autograph collector as well.  He happily agreed.  I purchased a photo of Eddie Van Halen online from the Van Halen Store.  Unfortunately, the photo did not arrive in time.  Fortunately, I gave him my A Different Kind of Truth CD insert instead.

When Nick returned to New York prior to the two Madison Square Garden concerts, he told me that he was still holding my CD insert because he was only able to add the autographs of Alex Van Halen and Wolfgang Van Halen to it.  My friends doubted the authenticity of any of this.  I, however, had absolutely no doubt.  I told them that they were simply wrong not to trust him.

Nick was eventually able to add the autographs of David Lee Roth and Eddie Van Halen to my CD insert by the end of the tour.  He retired the following year.  I have not seen him since his retirement. 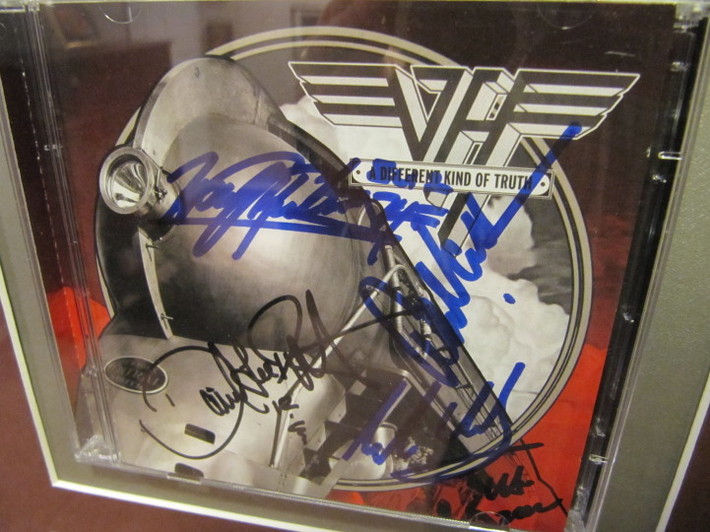 My Van Halen autographed A Different Kind of Truth CD.  Thank you, Nick!

Nick, if you happen to be reading this, I would like to thank you once again for such a wonderful gift.  I hope that you are well, and that you are enjoying your retirement.

This is a great story. I would bet these are the real deal although I do not know their signatures. Thanks for sharing.

Thanks, Joe W.  The autographs are authentic.  I have no doubt.  David Lee Roth was the last autograph that Nick was able to add to the CD insert because Dave was rarely with the other three members of the band.  Dave also insisted that he sign his name with a black Sharpie instead of a blue Sharpie, since the other three members of the band all signed their names with a blue Sharpie.  Typical Dave.

Love the story! And I agree, these are without a doubt the real deal.

Thanks, Steve.  I am glad that you enjoyed the story.  Not only did the band dedicate the concert to Nick, but Eddie Van Halen gave him an autographed guitar.  Eddie would autograph the guitar that he played the song “Tattoo” with, and donate it.  That evening, he gave the autographed guitar to Nick.  The band also gave him a tour jacket.

Awesome story, and they look real to me!

Thanks, Josh.  I am glad that you liked it.