How to Buy an Authentic Signed Guitar?

I would like to purchase a signed guitar by Paul McCartney or the Rolling Stones or other artists and I'm looking for advice on the best place to find one with an authentic signature?

Try to avoid guitars that are signed on the pick guards,which a lot of them are unfortunately.

With the Paul make sure it comes with a COA from Frank Caiazzo or Tracks,the two best authenticators when it comes to Beatles authentication.

Also try to get a Paul signed Hofner bass that was made in Germany,avoid the ones made in China and elsewhere,

And again try to get one that's on the actual guitar not the pick guard.

With the Stones the same thing….Avoid getting one with signatures on the pick guard,the markets flooded with them and I would avoid purchasing one like that if I were you.

Also try to find an older signed Stones guitar, pre 2003,they are rarer and will be a better investment for you.

Thanks for the advice. I've definitely familiar with Frank Caiazzo but I'm not familiar with Tracks. Are the two associated?  I couldn't find much about Tracks online so could you please point me to their website?

Since I'm a new collector I might buy a Paul or Fender but signed on the pick guard just to get started. However, I would definitely prefer to find one that's signed on the actual guitar.

Have you heard if places like Hard Rock Stage Productions or Autograph Pros are reputable places for buyer autographed guitars?

Caiazzo and Tracks are great dealers and no one is more respected than they are, but I don't believe that either of them offer authentication to the public. Frank Caiazzo used to. I think he authenticates and provides LOAs for some dealers and auction houses, but not for the public as far as I know. Tracks only offers LOAs and COAs for pieces they are selling.

I have looked at Hard Rock Stage Productions inventory online several times over the years, and I don't recall ever seeing anything they were selling that I would buy at any price.

I just went there. Here are a few examples:

A guitar purportedly signed by Bob Dylan...on the body! They're asking $599. I'm not sure if I've ever seen one before signed on the body. I would expect it to go for 5-figures: Here's a Hofner Bass they claim Paul McCartney signed...again on the body. $3,299: 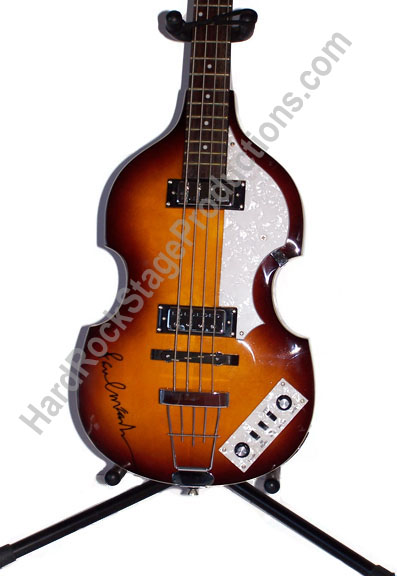 And guitar they claim was signed by Paul and Ringo! Yes...only the body with perfect placements. $1,598! I wonder if the guitar was manufactured before Ringo stopped signing: 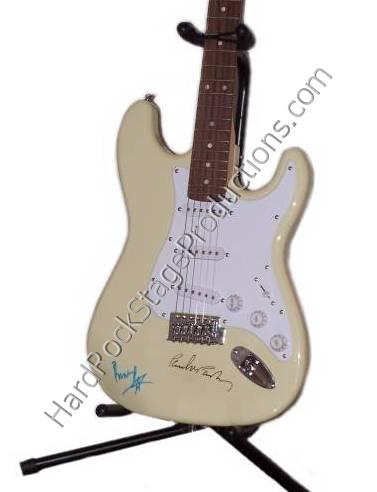 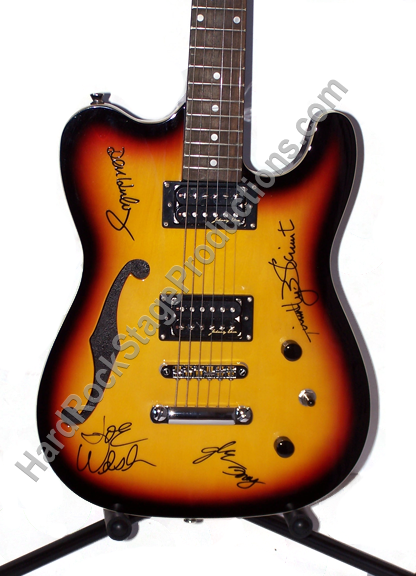 Permalink Reply by Mike T on October 29, 2015 at 10:08pm
They don't pop up often, I posted a McCartney Hofner bass a few weeks ago, it sold for $20k. If you're going to invest I agree with Bob, avoid pick guard signatures and try to get decent guitars, not cheap China guitars.

Thanks for the advice. Have you heard if places like Hard Rock Stage Productions or Autograph Pros are reputable places for buyer autographed guitars?

Autographs Pros is legit but typically overpriced.. never heard of the other one.  RR Auction usually has guitars in their monthly auctions, Walls of Sound on ebay does occasionally, and Roger Epperson usually has a few for sale at any given point.

Thanks for the advice!

I went onto Hard Rock Stage Productions website just to look at the autographs I know as I never heard of them (I study MJ autos) and the Thriller album (the only MJ they have) appears to be a forgery.

Ok thanks for the heads up! After looking around on the Hard Rock Stage Productions site I had my suspicions...

Autograph Pros is top notch. You pay for what you get. BTW, never hesitate to try to negotiate with any dealer.

Very very tough to find authentic signed guitars by Paul or Stones with sigs on actual guitar. Expect to pay a lot. I see nothing wrong with guitars signed on the pick guard -- why avoid them especially if you don't have the many thousands to spend on the other kind?  They still would look great displayed on your own wall of fame. Every collector has their own preferences.  As for where to purchase - RR Auctions, Heritage, Tracks, Perry Cox, and SOMETIMES eBay has these but run it by this forum first if you don't want a forgery.