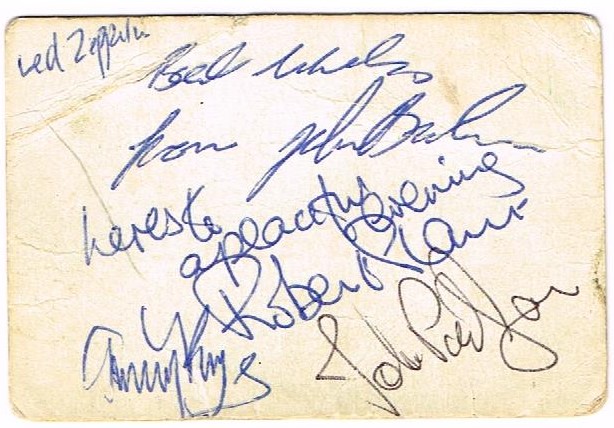 What a luck day today has been!

Some years ago I bought from Memorabilia UK a vintage business card signed in 1969 on the reverse by John Bonham, Jimmy Page and Robert Plant (Roger Epperson has given thumbs up for the set). Today, 48 years later here in Helsinki, the set was completed.

Tomorrow John Paul Jones will play a concert here at The Savoy Teatteri with two Finnish classical music musicians (acoustic improvisation). Today I had a chance to interview John Paul Jones. After the interview I told him that I have been listening to his music since the 70's, when I was a kid who saw "The Song Remains the Same" at a local movie theatre.

I told him that I have a set of Zeppelin autographs minus his signature and that it would mean the world to me if he would sign it too. He was very kind and happy to complete the set.

He signed his autograph carefully (the card is small) so that it would fit the set nicely. "I have a very long name," he said. I told him that the others left space for his autograph. He replied, "That's nice...they usually didn't leave space for me."

Seeing Bonham's autograph made him sigh, "there's John Bonham." After he signed I shook his hand and thanked him from the bottom of my heart.

What a great day this has been. One of the best ever!

Permalink Reply by Paul Hakimian on April 4, 2017 at 1:26pm
Wow!!!that is such a great story!!!love the set.Finally complete!!was he being sarcastic when he said they usually didn't leave any room for me?
Congrats completing such a great set!!!

Thanks. I think he was a bit sarcastic, but he has a great sense of humour. When I told him that "I have never been this nervous", his reply was "you´re doing ok".... I´m 13 again :)

Permalink Reply by Paul Hakimian on April 4, 2017 at 1:56pm
That is so cool.he really looks like such a nice guy.
I first time I met Jimmy was in 2002.I sat with him for a healthy 5 minutes believe me thats a long time when your sitting next to a legend. I don't even remember what I said to him.I'm sure I sounded like a 10 yr old.he was very nice.He signed 2 pieces for me one of them was a picture of my niece,she was six at the time.Her name was Paige ,I told him my brother named her after him.He was very amused by that and signed the picture for my brother.Then he signed a zep 1 for me dead center.He was very pleasant to speak with.Ater a final handshake ,it was time for me to get up and leave him alone.here is a picture of the signed zep 1 .not a great shot,I zoomed in on the sig.
Attachments: No photo uploads here

Great story. Thanks for sharing

Permalink Reply by Adam Halloran on April 4, 2017 at 2:01pm
Wow. That is simply amazing, it blends in perfect. The sigh reflective over missing John I am sure. Congratulations!

Permalink Reply by Paul Hakimian on April 4, 2017 at 2:05pm
Hi Adam how are you...I agree that the sigh was a sudden overwhelming thought of John.

Permalink Reply by Adam Halloran on April 4, 2017 at 2:07pm
I am doing great Paul. I love hearing stories like both of yours. It is nice to see peoples heroes being kind to their fans. Amazing pieces!

Thanks. Yes you could feel that he misses John.

ps here is info about the concert tomorrow:

I do have one question, though. Why not use a blue ball point pen, so they all match? Not that it matters, just curious.

Thanks! Good question. I wanted JPJ´s autograph to be a little different, because it was signed (years) later and it was obtained by me. In a way there is still the old set too. On the other hand ball point was used to give the "vintage feel", but different colour to make it special. I hope you understand what I mean.