I have had this for upwards to 30 years if not longer. Was going to have then authenticated and graded, but if they are thought to be fakes, I  might not.

Any help is appreciated 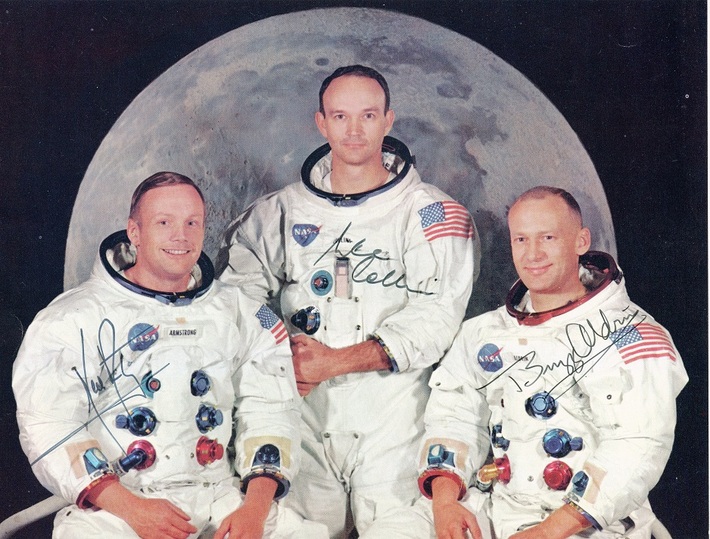 Welcome. They are not Autopens for sure and they do not match secretarials as far as I can see. I would contact Steve Zarrelli.

The Armstrong definitely looks real to me. I'm not as good with Aldrin/Collins, but they don't strike me as being fake.

However, as Eric mentioned, Steve Zarelli is the person to ask. He's the top space authenticator in the world. I've sent every one of my space autographs to him for verification, and he's great. Among space collectors, his authentication is considered definitive.

Steve offers two services. The first is a $20 quick opinion by email. The second is a full appraisal for $140. I recommend doing both, so if it is a fake, you don't lose the full $140. I'd spend $20 on the quick opinion, where Steve should quickly be able to tell if it's a forgery or secretarial. And if that passes, mail it in for a full LOA.

It's a lot of money, but it will add far more to the value of the piece. With a Zarelli LOA, that photo is worth about $5000. Without the LOA, it'd probably sell for closer to $4000. If it's real (and I think it is), it's a real treasure! It's definitely worth getting authenticated.

Thanks for your help everyone.

I will contact Mr. Zarelli and start out with the email option and then if thins turn out positive, go with the LOA.