Roll Back the Clock to 1968: Did Carl Yastrzemski Really Sign Those Books? The 50 Year Mystery.

I have to admit, that I am probably the only that considers this a mystery, but having grown up in Boston, Yaz was someone I followed throughout his career.  I also collect Red Sox team signed balls from Yaz' rookie year through 1983, his final season.

1967 was a magical year for Red Sox fans.  It was the year that turned the franchise around.  Yaz had a career season, and as a result did commercials, dinners, speeches and of course, the usual biography he wrote with Al Hirshberg.  I do not remember the details, but at that time, many of them were signed with this style signature, and thought to be authentic. (I have no idea why some of these photos are sideways, but if you click on them, they will show correct orientation) 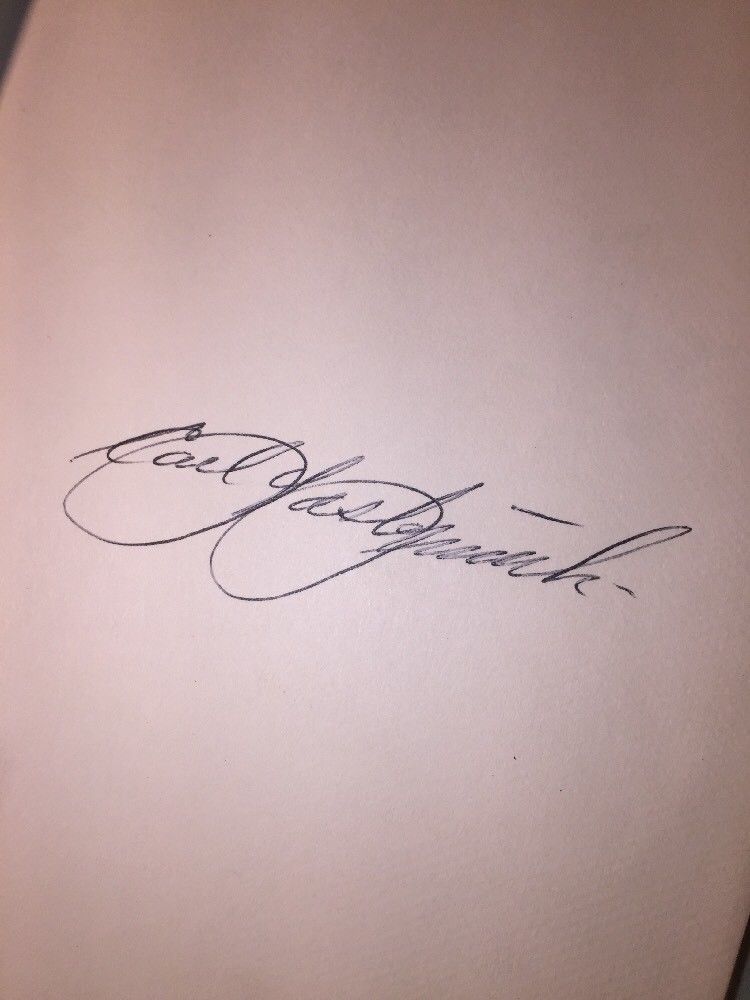 Over the course of time, I started collecting examples of Yaz signatures from early in his career.  Here are a couple from 1964 (authentic) 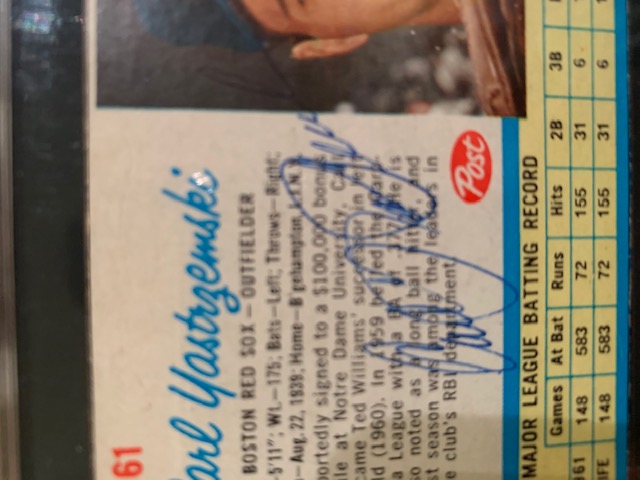 Notable in the '64 era signatures is the double loop in the last name.  Very similar to the books that were signed in 1968.  With only these examples to compare, I had not reason to doubt that Yaz signed those books.

Many years later, when I started collecting the team balls (Yaz signatures on team balls, especially from the 60's, are difficult to find, he was not a willing signer), I noticed a pattern from his 1961 rookie signature: 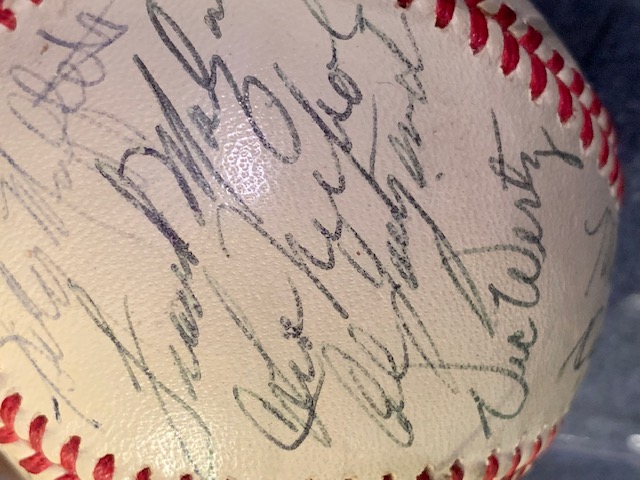 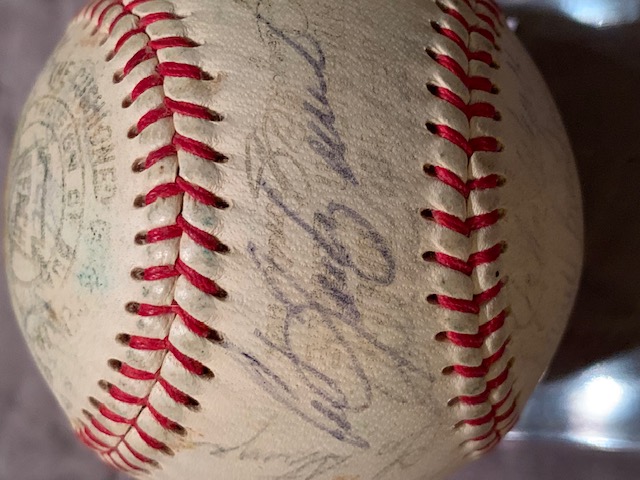 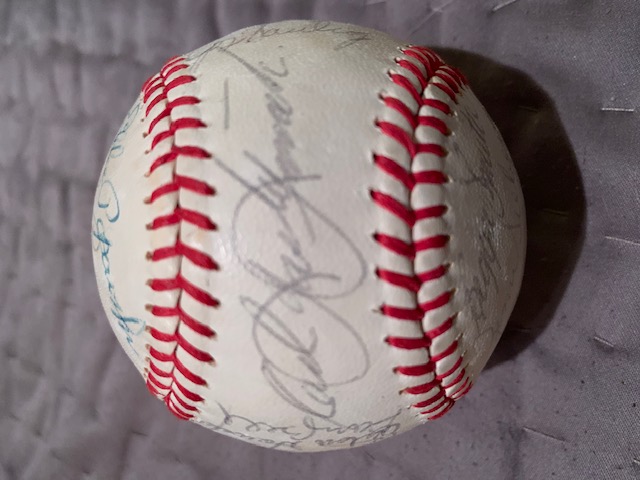 Why would Yaz revert back to his 1964 style, to sign a bunch of books in 1968?  Compare the two 1968 examples above.  When you look at the evolution of his signature year to year, it appears that there is a high likelihood that the books, (and the ball) were signed by someone else.

Another thing that I found interesting, was one of these books that was recently listed on ebay, had the "ghost" signature, but also had an authentic version, with his handwriting in the same book: 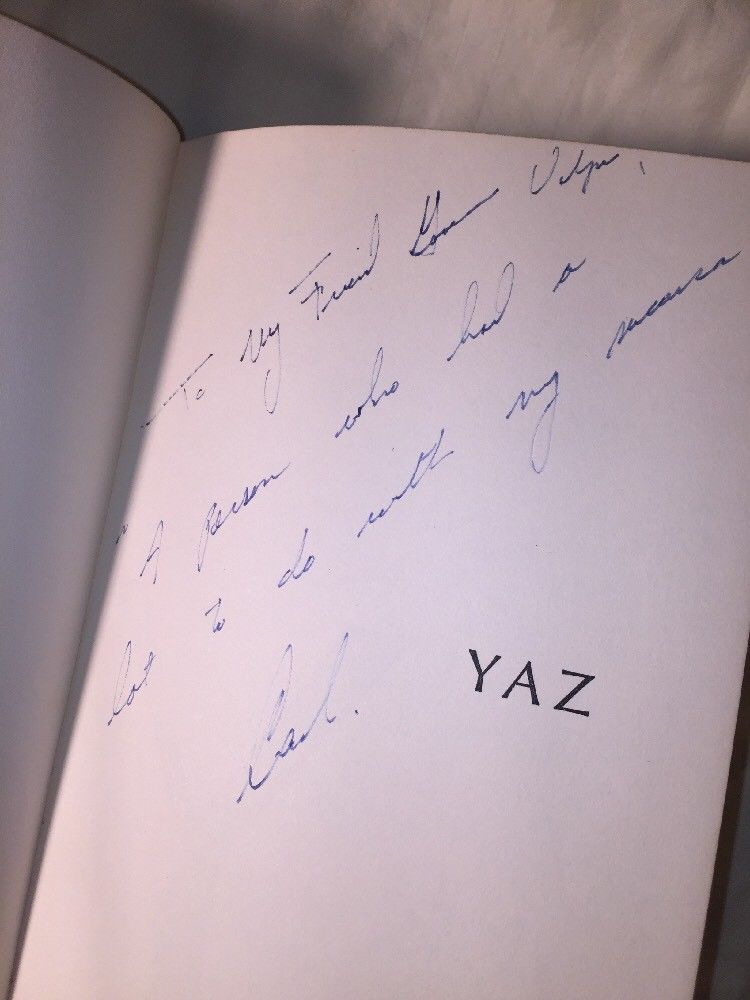 Over the years, I have seen many of these books authenticated by the most prominent TPA's.  I even own one of these books.  But I am now more convinced than ever that back in 1968, when the Sox and their fans were still basking in the glory of the 1967 season,  that for some reason that we will never understand, a large quantity of books advertised to be signed by the Triple Crown winner, apparently were not.

Are you the only one who’s questioning the book autographs publicly? Have you gotten any feedback from others who collect him?

Steve, I have not discussed this with anyone else, as I believe the only folks that would be interested are sox fans, likely in the New England area.  I moved out of there many years ago.  I just find the topic and study interesting, as I at one time believed those book signatures were authentic.  Now, when I look at his signature year to year, it seems highly unlikely.

Interesting topic, Terrier. Thanks for doing this!

thanks Steve Z., you will be quizzed on this! LOL

Permalink Reply by Christopher Williams on January 9, 2019 at 4:00pm

As an autograph collector, your findings, Terrier, are very interesting and revealing to say the least.

Thank you Chris, 40 years of studying this guy!