Smeared signatures start at the artist level. it’s simply a matter of units sold/dollars and sense to them, they don’t see these items like collectors do. It doesn’t excuse anyone’s Customer Service but the same sentiment applies. Almost as if their thinking is that you should be happy you even got the autograph, thanks to us.

As a caveat, when you’re paying 10 or $15 for an autograph you really don’t have much to complain about although I totally get it.

All of those signed super deluxe Metallica books had smeared autographs. And the sentiment was the same. That was a bitter pill to swallow.

Reminds me of one of my favorite Monty Python lines: “What I wouldn’t give to be spat at in the face!”

Just wanted to bring to people's attention my last  few purchases from TSL. I am losing faith in the company.

Journey - Freedom Vinyl - Like Jason I did not get the autographed insert. They did make this one right and I did get the insert a couple weeks later after contacting them.

Marcus King - Young Blood CD - This one came with one of those super small 3"x3" (the size of a typical post-it note). It is hard to tell if it is even his true autograph because he used a fat marker and obviously very little room to sign. I just accepted this since they didn't say exactly what you are getting. And I really do go by the 'you win some and you lose some' and am just writing this off as a loss. But they should let us know ahead of time if you are getting these. I would have passed.

Yungblood - CD. I got 2 of these. The artcards were smashed into both of these and not tucked correctly in with the cd cover so they were both damaged. I have a claim going on these looking for a refund since both were like this there is no point in getting a replacement since most likely they will also be damaged. I got one of these off of Amazon and it was packaged perfectly so this didn't happen. Wish it had been vice versa because Amazon is a lot easier to do a return.

Collective Soul - Vibrating CD - This one came in fine.

Megadeth - The Sick, The Dying, The Dead CD - Ordered 2 and one came with a huge crack in the case. Not gonna make a federal case out of this but if they used proper packaging rather than a plastic non bubble wrapped bag it could be easily avoided. It is just a sign of pushing product and not really caring after getting peoples money.

I wasn't going to even post this but the straw that broke the camels back was I just opened my:

Edgar Winter - Brother Johnny vinyl - Guess what? Nothing inside was signed again! I had already got the cd from TSL and didn't really want to open the vinyl but nothing came separate so I didn't really have any other options. Guess this really didn't surprise me but like I said, losing faith. Have not heard back from them on this yet.

Not trying to sway anyone one way or another. Maybe I am just the unluckiest customer they have but I would make sure if you get anything from them do yourself a favor and open and video it like Jason did, just in case.

Dude I just got my Edgar winter vinyl yesterday and no autograph either! I noticed their website says it's not supposed to ship til 10/3 maybe they jumped the gun... awaiting response

Didn't have as many orders with them so far, but can relate. The tiny Kiss "Destroyer" cards with the barely visible sigs were disappointing, too.

those were disappointing but I wouldn't consider it completely TSLs fault.. The marketing team for Kiss should have splurged on a better item, at least normal size.. TSL however should have some say on marker used and placement of the signatures..

It sounds like a QA issue, but TSL will likely try to blame the distributor. I documented my experience earlier in this thread.

I am pretty much finished with TSL after my issue.

My Megadeth hasn't even shipped yet. Outside of this, my only other issue was the Jenny Mollen book not being signed by Biggs, but they made it right.

I'm really glad they came through for you with Journey. I'm still waiting on mine, nothing yet.. I mentioned my video multiple times to them but they didn't acknowledge it at all in any of their replies.. I might post the video to YouTube or something down the line if they never come through for me. These problems have to be addressed and that would be one way to keep everyone aware. Ill keep recording myself opening items that arrive sealed. Its not a big hassle. If the item is in there I just stop recording and delete the file.

I cant believe this happened again to you with Edgar Winter. It does seem that you are having the worst luck out of all of us. It cant stay this way forever, I'm sure your luck will turn around. I know how frustrating it all can be though

Finally received the missing Journey inserts.  TSL does have occasional problems (im not sure what reseller doesnt) but they seem to be making an effort to make sure everyone is happy in the end. I have to give them credit for this. 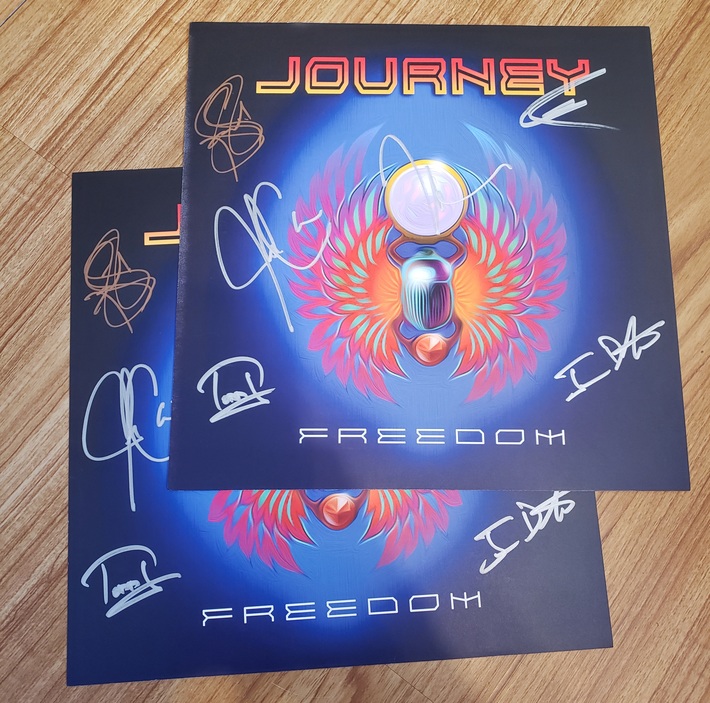 My most recent orders off the top of my head (CD- Megadeth, Little Big Town, R Springfield, Jewel, Nugent, etc) have all been fine.  Sounds like vinyl can be a little more hit and miss (my last vinyl- Scorps- from them was ok).

Totally agree with you. I am just making everyone aware of my experience if they are interested. Before this last batch I had a good run from them. And the couple issues I did have before they rectified over time. But Christopher is correct, they have blamed the distributor every time and won't stand behind the quality control.