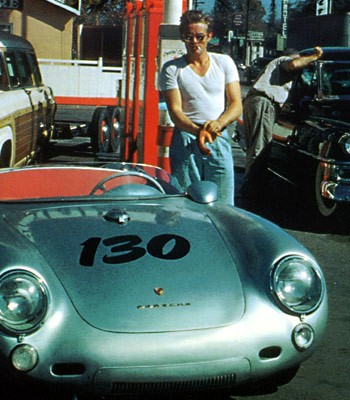 I remember 10 years ago going into the Hard Rock Hotel and Casino in Las Vegas, and looking at the various things on their walls. I was shocked to see they had part of the plane that killed R&B legend Otis Redding. It seemed in bad taste; although, if somebody gave me part of the plane, I wouldn’t refuse it.

Since I’ve been on this kick about celebrity cars lately, I figured this latest story that involves James Dean was one I couldn’t pass up.

In 1955 when the 24-year-old Dean crashed his Porsche 550 Spyder, lots of stories came out about the vehicle. Perhaps it’s these legendary stories of about the curse of the car, that inspired Stephen King to write “Christine” about the 1955 Plymouth Fury that was possessed.

Dean was filming Rebel Without a Cause when he got the car, and he had George Barris, known for working on lots of cars in movies, customized it. The number “130” was put on the doors and hood, red stripes over the back wheels, and the name “Little Bastard” was painted on the car. To this day, the only other car I’ve seen in person that had a name stenciled on the door, was Lakers coach (back when he was a player in the late ‘80s) Byron Scott. I was talking to him in the parking lot of the Forum in Los Angeles, and glanced at his red Mercedes as he got into it. The name “Byron” was on the door, which I thought was a bit odd. But I digress.

There’s a famous story about Alec Guinness (Bride on the River Kwai, Star Wars) seeing the car and telling Dean that it looked sinister and he’d be dead in a week if he drove it. And…that’s exactly what happened! That little bastard, well…it was appropriately named. A week later, Dean would be dead. 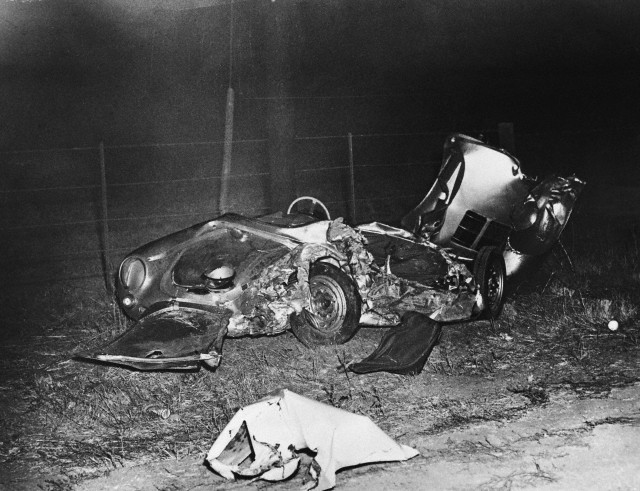 Barris bought the wrecked car for $2,500 and it ended up slipping off the trailer and broke a mechanics leg. Barris would sell the engine and drivetrain to a couple racers (William Eschrid, Troy McHenry). They had various parts from that car, and while they were racing each other, McHenry hit a tree and died instantly. Eschrid was seriously injured when his car locked up and rolled over while going into a turn.

That’s not all! Two tires from the Spyder were untouched, and Barris sold them. The owner of that pair had them both blow out simultaneously, and the car ran off the road.

Rumor has it, two thieves tried stealing car parts, and both were injured during that attempt.

The California Highway Patrol convinced Barris to let them show the car in an exhibit on highway safety. Well, the garage that held the car caught fire and burned to the ground. The car wasn’t damaged though.

At a high school exhibit, the car fell off its display and broke a student’s hip.

When the Porsche was being transported, the truck driver lost control and somehow fell out of the vehicle and got crushed after the car fell off the back. It would fall off two more transport vehicles on the freeway (although those didn’t result in any injuries).

The CHP, having grown tired of all the “accidents” decided to ship the car back to Barris. That’s when it…disappeared.

Now comes word that it may have been found.

The owner of the Volo Auto Museum in Chicago has been trying to hunt the car down for over a decade. He’s offering $1 million to buy the wrecked vehicle, which may seem expensive, but it’s a steal if you consider that Dr. Jack Kevorkian’s crappy ’68 VW van went for $33,000 a few weeks ago.

A man named Shaun Reilly, living in Las Vegas, says he knows where the wreckage is hidden. Of course, he has an attorney.

Reilly said he saw his father and some other men hide the car in a Bellingham, Washington building. He overheard guys say it was James Dean car, and…he took a polygraph test in which he passed with flying colors.

What I find fascinating about this is…if it is the car, and it’s worth a million dollars (which it basically is, since somebody is willing to pay that)…I’m sure the fact that your dad had stolen property doesn’t mean you get the cash. The Barris family will be swoopin’ down real soon.

I’m sure legal folks will be discussing how to make a deal happen, but…who knows. If they feel a million bucks isn’t enough, we might see the car on eBay.

But if you’re the winning bidder…don’t say I didn’t warn ya!

There is a part of Otis Redding's plane in the Rock N Roll HOF. I wouldn't buy the pope mobile, but would soooooo buy the Weinerschnitzel car. Although, I'd be sick of people asking me the same thing they ask Corvette owners: "Are you trying to compensate for something?"

Comment by Paul on October 4, 2015 at 12:42am
Yes compensate for my dick size. Your blogs are fun I can say what I want.
If you buy the pope Mobile I'll be your driver, you could sit in the plastic bubble and stick your ass cheeks on the bullet proof glass.

If you were my driver, and I was in the pope mobile, I'd dress like a mime. I'd continually do the "hands against the glass box" bit !!!

Comment by Paul on October 4, 2015 at 7:40pm
Very funny. We have a New York Fashion sign on top drive around time square.
But it is interesting what guys collect. Crashed car isn't uncommon for race car drivers for people to buy and restore.
Airplane parts and different obscure items. One fellow sold his belly button lint collection to a museum for 3k. True story.