As everyone knows that buying a Nirvana signed memorabilia’s is a crapshoot. You would not know what you are getting unless you got the autographs in person yourself. Nirvana autographs are widely forged and available all over the internet. There has been much discussion here on the forum on Nirvana autographs. But there are not too many Nirvana autographs that have been authenticated by widely recognized 3rd Party Authentication companies. Solid provenance of where the autographs came from is the best evidence that you can depend on to be sure that the autographs are authentic to start with. But still more research and homework needs to be done to verify the authenticity of the autographs.  There are many sellers on the net that have the usual provenance of that it was obtained from someone who works in the music industry. Or it was from one of Seattle’s biggest in-person collector of Nirvana memorabilia’s. Lastly fake seller will always use a radio- station promo Nirvana CD as to suggest that it was signed at a radio station.

I always follow the five simple rules of “How to Buy Rock….Without Getting Rolled” by Steve Crykin when I acquire an autograph.

Recently I came across an early 1990 Nirvana Signed Bleach CD cover signed by Kurdt, Chris and Chad.  Bleach is the debut studio album by the American rock band Nirvana, released in June 1989 through the independent record label Sub Pop. The main recording sessions took place at Reciprocal Recording in Seattle, Washington between December 1988 and January 1989.

Here are some pictures of the 1990 Nirvana Bleach Signed CD Cover. Below is the statement from the seller. The seller did sell an authentic Kurt Cobain written Nirvana set list from the same show a few months ago. Here is the picture of the set list and show handbill. 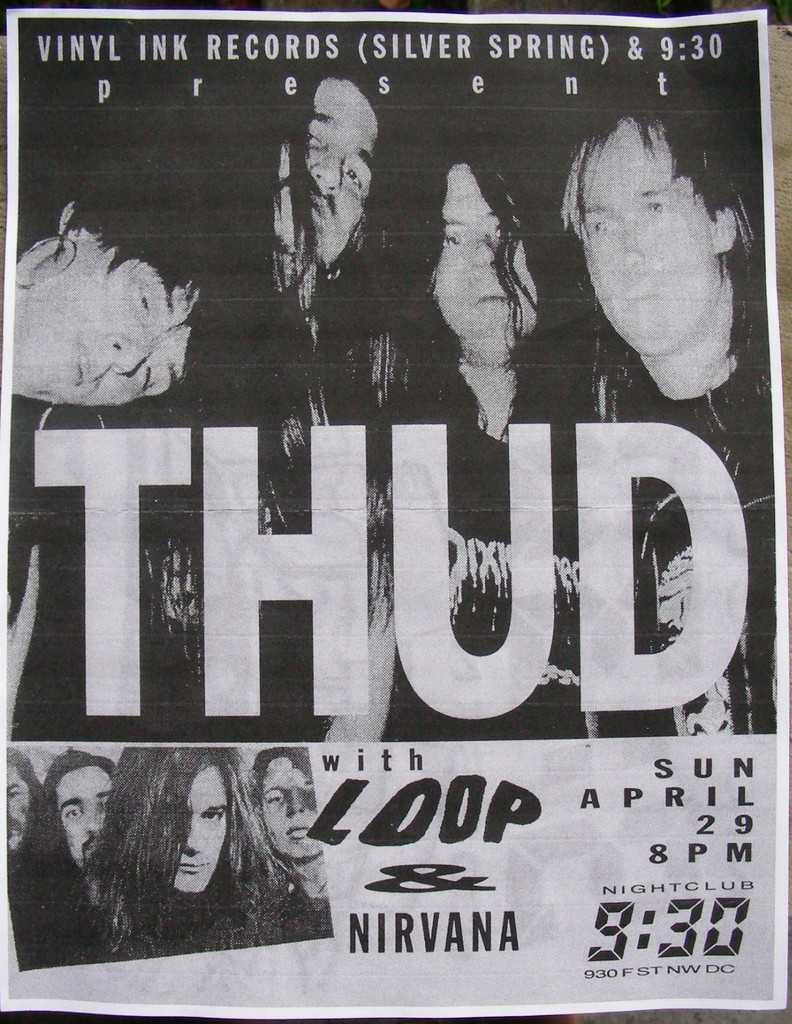 The show took place at the original 9:30 Club at 930 F St. NW, before they changed locations and moved into a larger venue.

My band and I shared the tiny dressing room with Kurt, Chris and Chad (any of you who played there remember it).

That afternoon, I helped the guys from Nirvana load in their equipment and we ended up palling around all day.  Chris (Krist)
gave me and my girlfriend at the time a bunch of t-shirts (a couple of which I may still have somewhere.)

Having hours to spare, I asked the band to sign some things.
I have since given away or sold most of them, including a beautiful set list on a paper plate sold a few months ago! This is the final piece I own.

This is a piece of history from one of the most talented singer/songwriter/musicians ever.

At the time, and for many years later, I was a well-known DJ in Baltimore and DC, and eventually befriended future drummer Dave
Grohl, photographed him many times, and photographed Chris/Krist (who, oddly enough, remembered this gig, remembered me, and
remembered my girlfriend's name ten years later).

You can Google my name, Johnny Riggs, and see that I've photographed Dave Grohl, Krist Novoselic, Courtney Love and many
other famous folks.

Kurt Cobain spelled his name several different ways for no apparent reason.  The odd spelling Kurdt came from when Nirvana recorded “Mexican Seafood” for the “Teriyaki Asthma” compilation. When it came time to make the album, they realized that they didn’t know how to spell Kurt’s name so they got a hold of someone who “thought they knew”.

Here are the credits from the “Teriyaki Asthma” album. 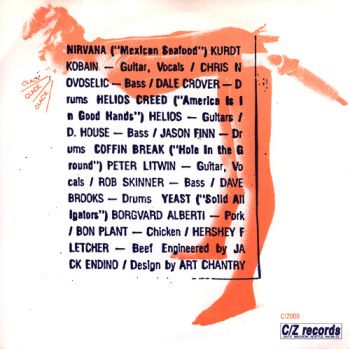 Here are the credits on the back of Nirvana’s “Bleach” album.

He later used the misspelling to give himself some anonymity. The ‘monkey photo’ credit on Nevermind is to Kurdt Kobain.

Other misspellings can be found in autographs, etc., like first names Curt, Curtis, and last names Cohbain, and Covain. 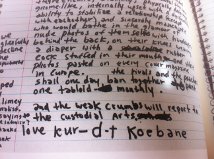 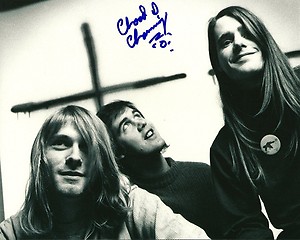 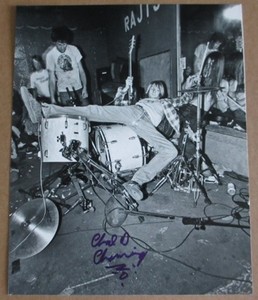 Chad Channing has a new band called Before Cars. I went to his Before Cars website info to try and get in contact with Chad Channing. I was directed to his Facebook page where I did sent him a message trying to get Chad’s confirmation that this was his signature. To my surprise, he replied me on the same day. Here is Chad Channing’s reply: The next issue was to check whether this signed Bleach CD cover was actually from the 1st CD pressing back in 1989. A fellow forum member who is familiar with Nirvana autographs suggested that I make sure that this signed CD cover was from 1989. Since this was signed on April 29th 1990, the CD cover has to be from the 1989 1st pressing. The 1st Pressing CD has a flat finish. Later reissue CD has a glossy finish. From research, I found out the cover graphic and the printing resolution are different on the 1st pressing CD cover. The fonts on the word “Nirvana” and “Bleach” are much bigger and print in silver. The later CD cover have much smaller fonts and print in white.

I have removed the Signed Nirvana Bleach Cover from the framing and has confirmed that the Nirvana Bleach CD Cover was from the 1st Pressing in UK by Tupelo and was released in August of 1989. It also have only 11 Tracks on the CD. The later Press CD has 13 Tracks o the CD. Other interesting information that I found out while doing my research is that Dave Grohl does not signed Bleach album since he did not play on this album. There were occasions where he signed CHAD on Bleach LP if he did sign. Here are 2 examples of Dave Grohl signing Chad Channing name and Dan Peters. Photos and info from http://www.nirvana-discography.com/pages/memorabilia/autographs.html I am also writing to Krist Novoselic to get his confirmation on this signed Nirvana Bleach CD cover. I will update as soon as I hear back from him.

UPDATE: 11/21/13 I wrote to Krist Novoselic on this signed Nirvana Bleach CD Cover back on March 5, 2013. Just got a reply back from Krist Novoselic yesterday with a note. :) Recently I was able to get Chad Channing to sign off on his Bleach CD Cover autograph. He also signed a Nirvana picture which was taken at the 9.30 Club, Washington DC on April 29, 1990. 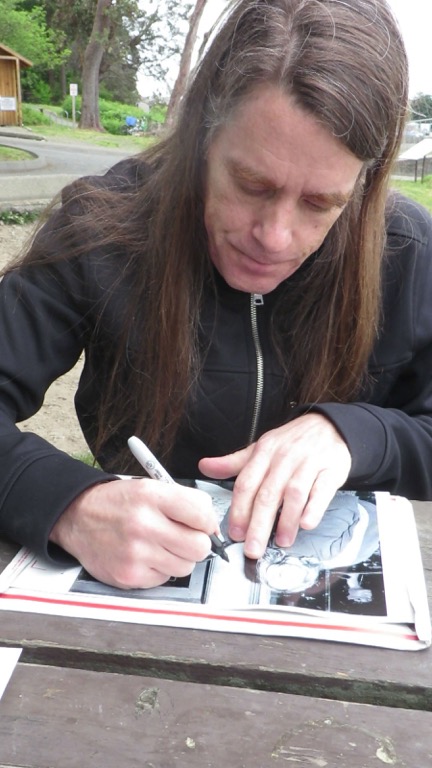 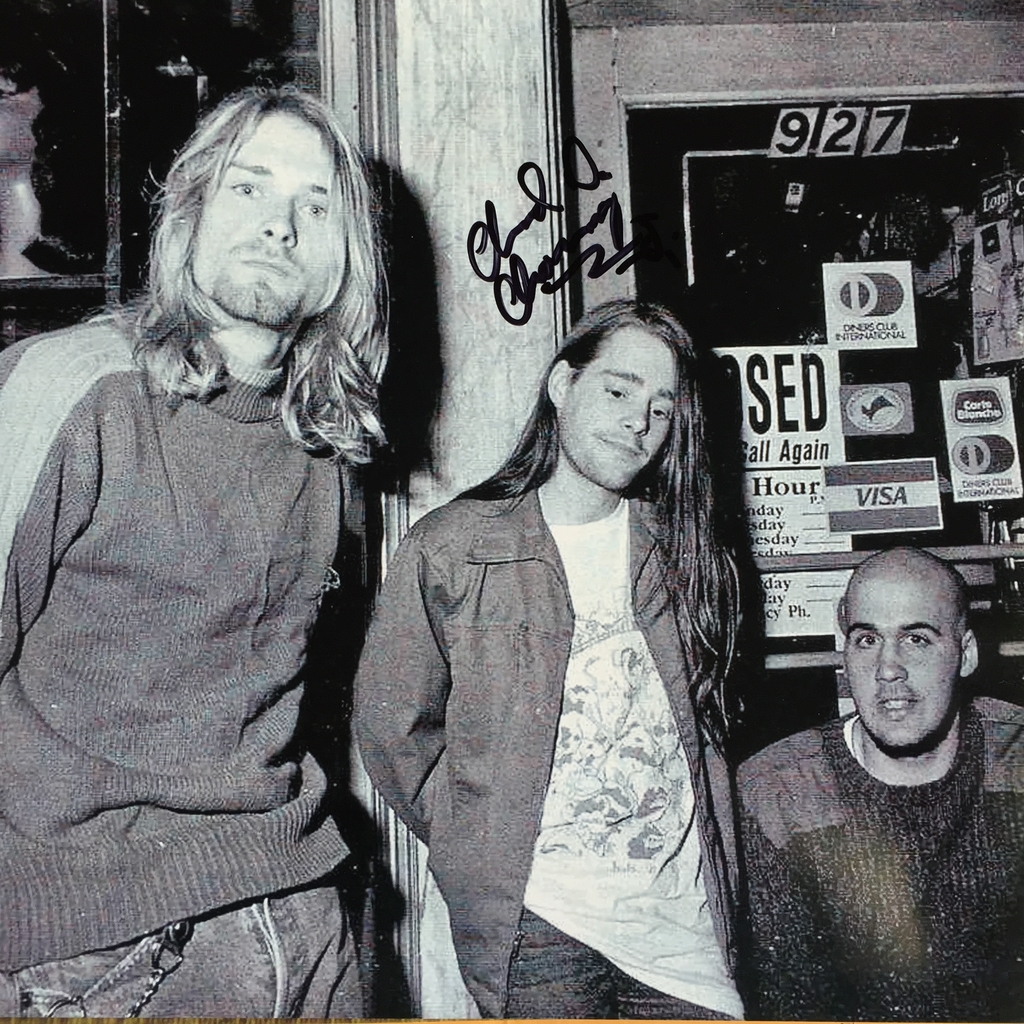 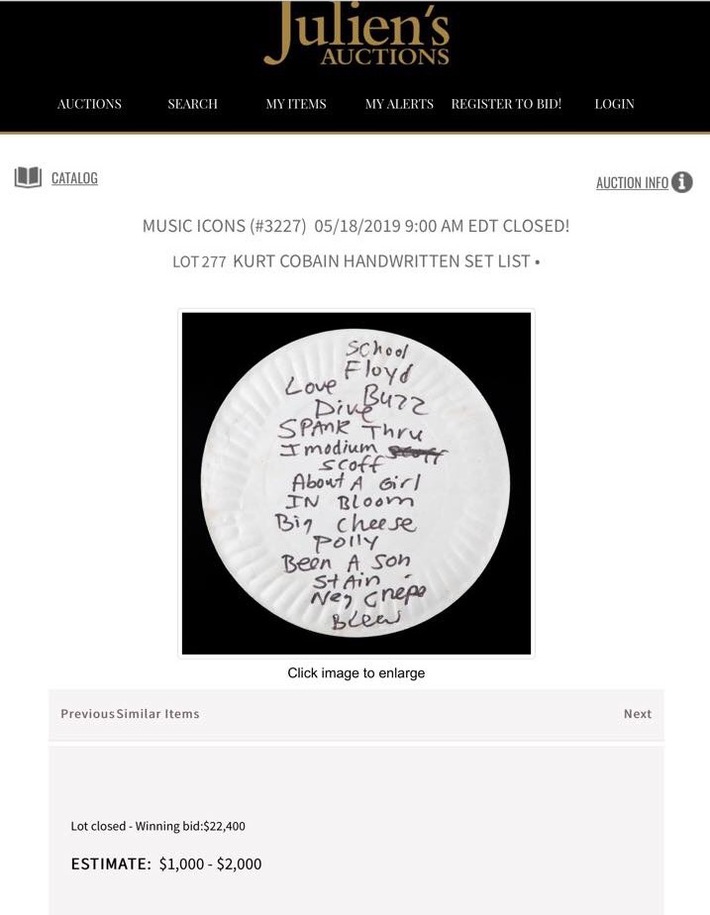 Update: Here is an example of an authentic early Nirvana autographs on a Sub Pop Concert Poster from April 6, 1990. Note the similarity of Kurt Cobain’s autograph on the Bleach CD and the Sub Pop Poster. Also Chad Channing did not sign with a sun and z below his autograph. I have since confirmed that he did not earlier in his autograph signing. 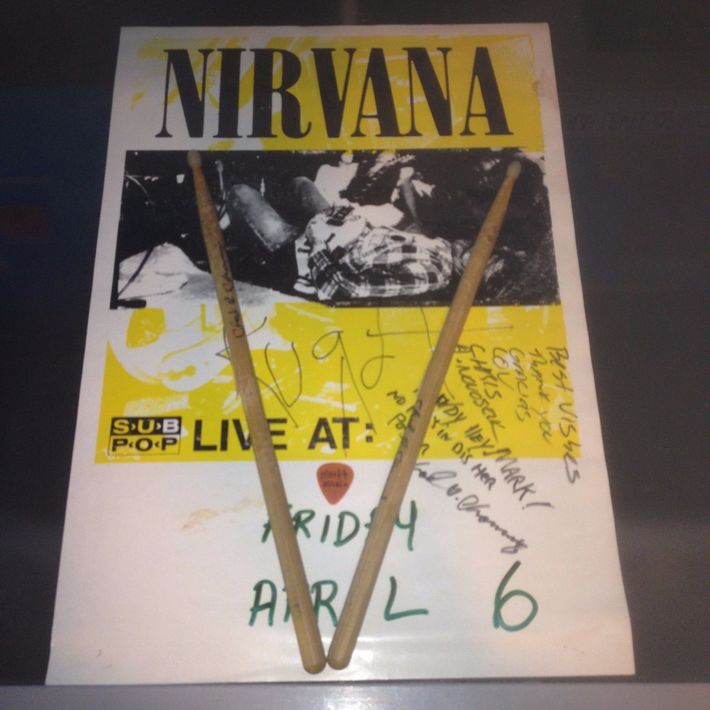 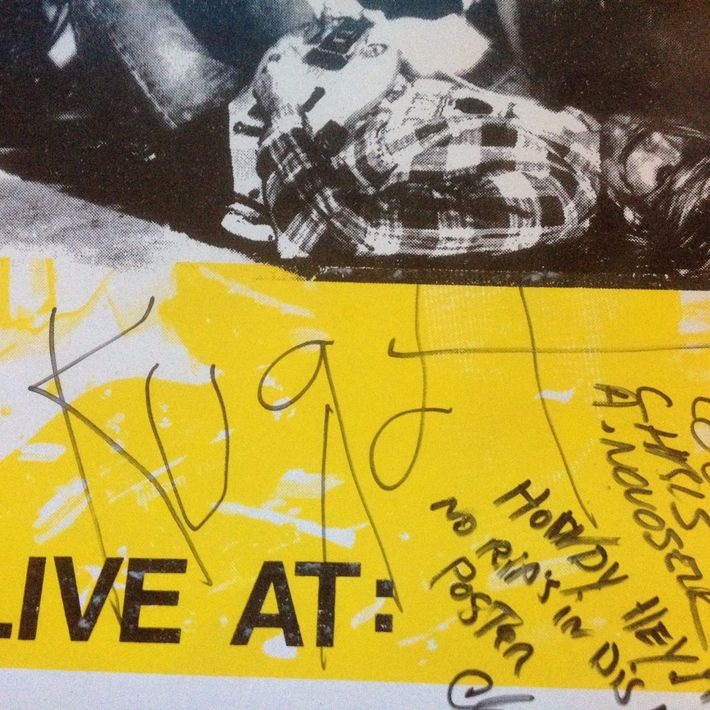 You are taking on a monster of a task with Nirvana. I would like to have a Cobain signature too but doubt I will ever let go of what it would cost to get one I felt good about. Thanks for your work on this.

Im sure your aware of this JSeah, but i would take those opinions from the band members with a grain of salt. Its kinda like the whole Kissdestroyer saga where he showed Gene Simmons a forgery of his signature and Gene said it was real on camera. I really dont think that these guys would know a decent forgery of their signatures from a real one. They have signed so much throughout their career that their really is no way for them to know, especially with very simple signatures like theirs. I just dont think they would ever be capable of picking out a decent fake of their signatures from a real one. Your line of thinking is solid for sure about asking them, and its something to gain info with, but i wouldnt take much stock on what they have to say as far as the authenticity of their or Kurts sig. Im sure you already knew this, i just thought id voice my opinion on the issue, since KissDestroyer1966 thought that Gene Simmons would never identify a fake as being real.

Thanks Carl for your opinion. This CD cover was signed way before Nirvana went mainstream with their hit album " Nevermind." Chad Channing was with the band from June 1988 to end of April 1990. From doing my research on this Bleach CD, I have only found one other Bleach LP that was signed by the whole band. This Bleach signed LP  was signed at an in store signing in Texas by the whole  band with Dave Grohl who had replaced Chad Channing signing Chad name on it without the z-sun under his name.  This was signed in the later part of 1990. You can see the pictures in my post above.

Even when Nirvana went mainstream, I was told by in person collectors that there were not many people seeking their autographs at that time in the 90's.

Comment by shawn on February 1, 2013 at 9:01pm
I'm sure by now that you've talked to my friend Mike Aring on this subject I take it?? I actually ran into Mike after about 10 years of not seeing him (just talking on the internet) a few weeks ago when I went to Columbus for Aerosmith and Ohio State football (Aerosmith werereally cool, Ohio State players are not allowed to sign autographs now that Urban Meyer has gotten his claws on them.).
Anyway, Mike became sort of "The guy to know" in Arizona for a long time after meeting Nirvana. I actually used to travel with Mike off and on to L.A. before he moved there. But I remember Mike having a bunch of Nirvana items upon meeting them and I certainly remember Kurt writing some very weird things on his magazines and such. At this point in my life, he's still the only person I know who has gotten Nirvana.

I know Mike Aring and do seek his opinion and feedback on Nirvana items, Bjarne Soderholm is also an in-person collector who had met Nirvana in Europe. I respect their opinions when it comes to Nirvana items.The magazine with the weird inscription by Kurt Cobain has been sold and Anne Marie who is also a member AML owns that magazine. You can see the magazine in the Nirvana examples link that I have provided above.

Comment by shawn on February 2, 2013 at 9:11am
I used to know Mike and his parents really well back in the day. I saw that Anne Marie Nirvana mag. I remember seeing that in Mike's house after he got them and thinking of how odd the inscription was. We were all sports guys at the time and sports people just sign and move on, nothing really added to the signature. So it was extra weird to see all that on the magazine. But mostly, I remember asking why I wasn't invited to tag along for the Nirvana trip and he told me," I didn't think anyone else would care." His buddy Kevin was actually the one who talked him into trying for Nirvana. I remember Mike coming back from L.A. for Nirvana as well that guitar neck that Kurt gave him as well.
Be careful, Mike's biggest drawback is his arrogance when it comes to autographs.

This is a great blog...and really needed! Thanks for posting it, and the Photobucket images. What about making a Nirvana photo album here and posting those photos, images, so people can comment on each one of them?