I finally had an opportunity to watch the Light & Magic documentary about Industrial Light & Magic on Disney+ on Saturday.  I highly recommend it to anyone interested in the history of film.

While watching the documentary, I began to reflect on the many amazing people who are involved in the art of filmmaking.  Many of those people are famous.  Many are not.  How common is it for autograph collectors to not only collect the autographs of their favorite actors and actresses, but also the autographs of the behind-the-scenes creators as well? A Phil Tippett autograph would be a wonderful addition to the autograph collection of any Star Wars fan.

Only a handful -- I find it's much more difficult to find signed items from line personnel/technical crew than it is authors or directors/primary creators.

I was given one of Colin Chilvers' books, Believing a Man Can Fly, last year, which goes in-depth with his work on the original Reeve Superman films, and is still sold on his website (which you can get personalized) -- I'm surprised more technical personnel don't do the same with their own memoirs. Some of those guys would make a killing on the market if they came out with a BTS book related to something like, say, the Alien franchise (give me the Alien Makers unofficial documentaries in book form with signatures from members of the effects team), Terminator or any other SFX-heavy franchise.

Star Wars fans seem to be tapped into the behind the scenes folks, but that seems to be an exception.

No offense intended, but I do not care for multi-signed items signed by the "big stars" and also a ton of less prominent crew or minor characters. Like seeing a Ruth Gehrig signed ball also cluttered with the signatures of the bat boys. No thanks.

More is not always better.

I agree, Steve.  No offense taken.

This is the closest thing I have to a behind the scenes autograph Mildred Dunnock and Fredric March in between takes on the set of 1951's Death of a Salesman. It has a cute inscription. Signed with initials. Fine with me - this is my favorite film with him. 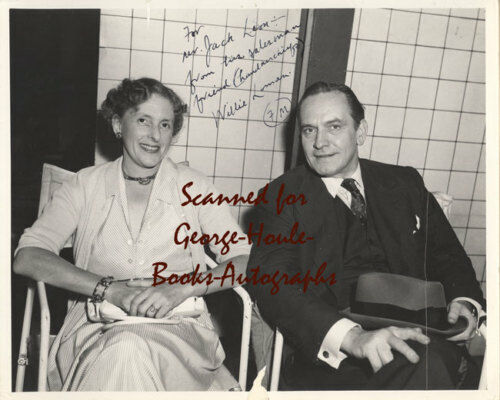 This is a great question you posed. First, in regards to Steve Z and the Ruth Gehrig (we realize you meant Lou), you're actually wrong in that analogy, and it was poorly done. Yes, you're correct. Nobody wants the bat boys on a Gehrig baseball. But you can't tell me some hardcore baseball fan, would rather have a solo Lou Gehrig signed ball, vs. a baseball signed by Lou (on the sweet spot), and around the rest of the ball, signed by 4 or 5 teammates. Especially teammates that maybe played 10 years in the Majors, but aren't Hall of Famers. These are people that...well...there might not be another signature of them out there!!!! Some player that played in that era, why would anybody save the signatures they got from them, as it wasn't the Babe or Gehrig???  I had that very argument from someone that worked for Autograph Magazine years ago, when we were both columnists.

Now, as a movie critic who often interviews the celebs, I'll have movie posters signed, and I do like them signed by ANYBODY associated with the movie. But here's what I wouldn't want. Those signatures to detract from the big guns. So, I had the cinematographer from one movie, sign the movie poster. The 4 big stars had signed on the photo, and you can clearly read their names. I had him sign by where the cast was listed, by his name. So, it doesn't detract from the big names you want to see, but it adds one more signature from someone associated from the movie. Now....would I have that same movie poster signed by the second grip, who might be the 38th name listed in the credits -- no. But if they're name is the movie poster, I want that signature on my movie poster.

I doubt, it's not just related to Star War fans, but I'll use that as an example, since it already was. If you had a Star Wars poster signed by Mark Hamill, Carrie Fischer, James Earl Jones, Harrison Ford -- and they sign near the top...would you NOT want the guy playing Chewbacca or C-3PO (Anthony Daniels), to also sign it? I think I'm speaking for 98% of the people on this website and anyone that collects autographs -- we want the side characters on their, too!!!!!

One of the things I did, when I spent an insane amount of money for a signed Morrison Hotel album signed by the entire band was -- I spent years, tracking down each person on the album. John Sebastian (Lovin' Spoonful), who plays harmonica on Roadhouse Blues, Lonnie Mack, photographer Henry Diltz, bassist Ray Neopolitan -- and they all signed it as well. Only Ray signed by the other 4 band members (one who is also named Ray -- Ray Manzarek), but I think it looks bad-ass that way. A signed album, signed by the band but also the studio musicians that played on it !!!!  Now, if one of those studio musicians signed right over Jim Morrison (the way Garth Hudson of the Band signed right over Robbie Robertson's signature on my album), yes, that would suck.