Since we all hate dealing with the Black Friday shopping, I thought I’d start this blog off with a Black Friday deal you might be interested in. I heard about this a few weeks ago, and thought it would be lame. When I discovered it was kind of cool, I thought I’d give you the heads up. I had read that Barnes & Nobles bookstores would bring out autographed copies of various books, as one of many incentives to get people into their stores this weekend. The picture in the paper showed a Hilary Clinton signed book, and I know that when she did a book signing in La Jolla, California, people got there at 3 a.m. (and many were turned away).

I ended up buying a handful of books, all autographed (and at the regular price). I got a Stanley Tucci cook book, a Drew Barrymore book of photos, an autobiography of Alan C******, and one I’m really looking forward to reading – the Martin Short autobiography. All the Barrymore books had a signature that was merely a heart, and the letter “B.” All the others were written out nicely, although I did go through all the Tucci books to find the most legible signature to purchase.

Some of the other books they had I didn’t care about. They included James Ellroy, Clive Clusser, and a few other authors that are names. It might be something you’ll want to check out if there’s a Barnes & Nobles near you. I was out of town for Thanksgiving when I heard that a woolly mammoth skeleton sold for $300,000. I immediately thought two things. First, the great ‘60s song by Sam the Sham and the Pharoes – Woolly Bully. The second thing I thought is…I’ve got to tell this story to my girlfriend. She was in the other room and I told her the price. She said, “Wow, that’s a steal.”

I laughed, thinking she was making a joke. She came into the room and said, “No, seriously. I saw that story on the news and the thing is over 11 feet high and 18 feet long, and weighs tons. I wouldn’t have thought the price was so cheap except what you told me sold for $3 million the other day.”

It had completely slipped my mind.

You see, the mammoth bones are over 10,000 years old. The thing that sold for $3 mil was only 75 years old. It was the original lion costume from “The Wizard of Oz.” It was worn by Bert Lehr, and it came with a sculpted facial likeness of him. Another collector owned it, and he wants to use the money he makes on the sale to…get this…buy the tin mans costume.

Okay, I was joshing there. He wants to use it to open an exhibit to display his large collection of collectables, which includes items from the TV shows “Lost” and “I Love Lucy.” 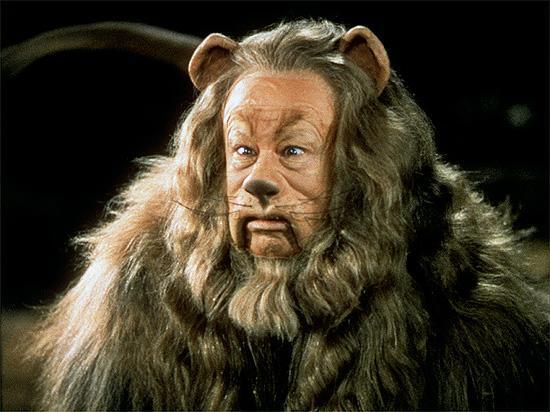 From Bert Lehr to Burt Reynolds. He’s going to be auctioning off items at The Palms hotel in Las Vegas on December 11th and 12th. That includes the red leather jacket he wore in “Smokey and the Bandit II” (who knows what happened to what he wore in the first picture), and two Golden Globes he won. An item I’d like to buy and burn – the cowboy boots he wore when he was oiled down in that bizarre scene in the horrible movie “Striptease.” Now, if they have something from “Boogie Nights,” I’ll be all over that. One of the best movies ever. I also wouldn’t mind a football from “The Longest Yard,” but there’s no word on all the pieces of memorabilia yet. I’d probably pass on any items from “Deliverance.” I still have nightmares about that flick.

Bank of America is currently trying to foreclose on his Florida home, saying he owes over a million dollars on three loans. 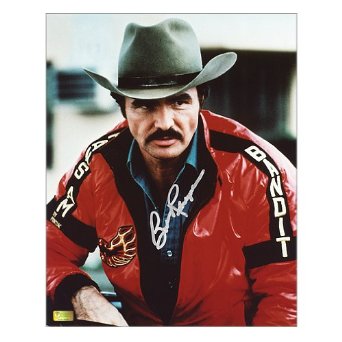 In the catalogue Reynolds states, “I’ve collected so many things that I truly adore but at this stage in my life I find it very difficult to manage them all. The fact of the matter is that it truly is the time to downsize and for these items that I have loved over the years to find new homes where they can be cared for and appreciated.”

Reynolds, a former college football player, also has some sports related lots in the auction. Signed items by Wayne Gretsky, Jack Nicklaus, and Muhammad Ali, as well as paintings and drawings by Henry Fonda and James Cagney. There are a few gifts from Elizabeth Taylor and Jimmy Stewart, as well as firearms and law enforcement badges. The weirdest item – one of his old American Express cards. Don’t leave the auction without it!

On a side note, when I was a teenager, I found out his address in Florida. I sent him a letter asking for an autographed picture. He sent back a signed photo two weeks later. According to Loni Anderson’s autobiography, he wasn’t the best husband; but to autograph collectors, he was always a class act. 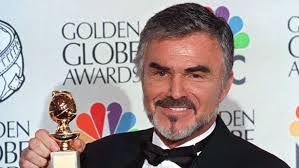 Yeah, the bad thing about the Barnes and Noble autographed books is that if you are merely a collector like me unless you are first in line when they open you get screwed because I was third in line and there was a couple in line in front of me who I knew made their living off selling autographs because we all run in the same circles and my Barnes and Nobles was one of them in the country who had the Derek Jeter signed book and this couple waited for the place to open and then literally ran to the signed section and bought all the Derek Jeter, all the George Bush, all the Hillary Clinton, and everything else they thought they could sell on ebay. I had a friend waiting at another Barnes and Noble and we were texting back and forth and the bad thing is the Barnes and Noble stores in my town had store hours that were staggered so mine open at 7 am and his opened at 8 am and he texted me around 7:45 and said bet you'll never guess who is in front of me and I said so and so and he said yes so this couple went to his store and bought all the George Bush and everything they thought they could sell and told him they were on their way to hit a few more. Barnes and Nobles told another friend of mine that they do not put any limits on the books and that it's all up to the publishers. Another example like the forgers out there where "GREED" takes over.

My father has an extensive collection, for lack of a better term, of signed books.  I have not had time to go through them all, but have inventoried many he obtained over the past 15 years or so.  I would gladly make them available to anyone here that may be interested in an effort to downsize.  Contact me or respond and I will put together a list to put somewhere more appropriate on this site, or not.  Most were obtained in person at Barnes and Noble, Borders, or other bookstores throughout the New York metropolitan area and Northern New Jersey.  Many are personalized, so I would include in the list only those that are not personalized for now.  He also has photos from many of the events he attended.  Fortunately he was quite OCD and very careful and organized.  Lots of celebrities, athletes, musicians and politicians, but no Bush Jeter or Clinton.

A few things. Anybody that bought them so they could sell them, will be in for a big surprise. You aren't going to get a lot for signed Clinton books and a few of those other names. The time they spent waiting in line, etc....won't be worth what they're sold for, unless she becomes President.

Another weird thing. I showed up at 8 p.m. (the store had been open since the early a.m.), and I got the books I mentioned, and there were more of those same names, too.

Comment by David S on December 1, 2014 at 4:11am
I went at 2pm and there were still plenty of all titles (except Bush and Jeter). I got Hillary for my own collection, but disagree with your assessment. Before the sale, the Clinton books were selling on ebay for $80-100....even now they are going for $55-80, after all the flippers put them on there. If u slap a psa/dna sticker on them they will get ya $100. For a $20 investment, that's a pretty good return.

I do however agree that the value will go up if she gets elected.

Why would they block out Alan Conners?

his surname is suggestive ? comeing

Did all Barnes & Nobles get signed Jeter books? How much were they?

from what I read some places they were very limited, only a few hundred in the whole country...so not all locations got them. For the lucky few, they were only $15. Also read somewhere that Steiner will be selling them for cheap, under $50, like they did with Mariano bon, but I can't confirm that