My Regrets with a Boxing and Acting Legend 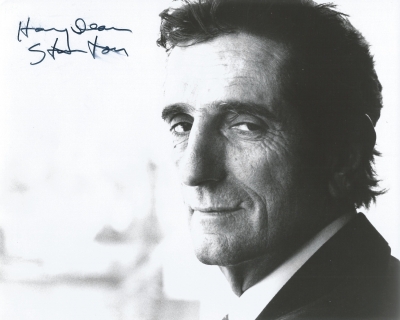 When a celebrity dies, I get a little bit sad thinking about all the work they did that I loved. Two recent deaths were a little easier to take, since they were in their 90s. Character actor and musician Harry Dean Stanton, who has been in at least 100 movies, died at 91. I never got his autograph, but at an event with other actors, I once overheard him talking. He said something hysterical. Apparently, he had dated Rebecca De Mornay (remember the girl on the train in Risky Business?). Stanton was 33 years her senior, but...when you’re famous in Hollywood. She liked ‘em older, too. She was briefly engaged to singer/songwriter Leonard Cohen, who was 25 years older. Anyway, Stanton said at this event, “I like to tell people my girlfriend left me for Tom Cruise.”

I regret not getting his autograph that night. And with the death of Jake LaMotta, I thought about another regret I had.

The “Raging Bull” lived a very long life for a boxer -- he was 95 when he passed away the other day. Years ago, I bought an autographed picture of Robert De Niro playing LaMotta in the movie. I paid $75 for it around 1989. I later sent it to an address I had for Jake LaMotta, and he autographed it.

Well, there was a time when Autograph Magazine was in newsstands, and they had a section in the back with various celebrities autographs. I was always careful about who I attempted. I wouldn’t go for anybody that was an A-lister, figuring they get hundreds of letters and autograph requests a day. It wasn’t worth wasting their time or mine, and as a kid, I got a pre-printed one from Julius “Dr. J.” Erving. That or an autopen was always a possibility. So, I just attempted people I was a fan of that weren’t so popular, and I’d compose a nice long letter explaining why I was a fan, before just hitting them up for their John Hancock. Well, there was an address for Cathy Moriarity. Most recently, she was in the awful movie “Patti Cakes” (about a teenage girl that wants to be a rapper); but her first movie was Raging Bull, which garnered her an Oscar nomination. I also liked her in Neighbors (the John Belushi/Dan Aykroyd movie, not the Seth Rogen one). She was also fun in the terrific and underrated “Soapdish,” as well as the underrated police film “Copland.”

Now, I did something that in “Autograph 101” they tell you never to do -- send something in the mail you don’t want to lose. For example, how hard would it have been for me to buy a DVD of Soapdish or Analyze That, and just send that to her? If it doesn’t come back, no big deal. But I was feeling lucky. I had sent a handful of requests to the addresses provided in Autograph Magazine, and I always got an autograph back. This one never arrived, though. I then sent a few follow up letters, and heard nothing.

I wondered if she had a personal assistant that opened her mail, and just decided to keep it. Hell, maybe she wanted to keep it. I bet she didn’t have a photo signed by De Niro and LaMotta. Now she does.

I eventually got a signed photo of Jake LaMotta, and it was relatively cheap ($40, if memory serves). He’s done a lot of autograph signings and they’re are lots out there.

That happened in the late ‘90s, and it took me until 2015 to finally forget about losing that photo.

With the death of Jake LaMotta yesterday, it brought that painful memory back.

On a positive note, I pulled about my DVD of Raging Bull, one of the best movies of all time. I hadn’t seen it in 20 years, and it was great to revisit.

I was trying to think of my favorite Harry Dean Stanton movie and I was unable to.  He was awesome in everything he did.

Ouch!  That one hurts.  I did the same thing with two Jefferson Airplane lp's.  I heard Grace Slick was great about signing her mail.  So I sent out two albums that already had Jack, Jorma and Paul on them.  Instead of writing a letter first, asking if I could send out the albums- I just sent them.  After about 2 months of waiting, I assumed they were gone.  Luckily, about 6 months later I got a package in the mail with both albums signed.  I got lucky, but learned a valuable lesson!

I had a Grace Slick story.

So, I had to interview her before an art gallery opening she was having (if you haven't seen her paintings, they're really, really good). So, I thought it would be better to bring her solo album instead of a Jefferson Airplane record. I thought she'd feel more like I was a fan. Well, I had it in a brief case, and did the interview. Before the interview, many fans asked for her autograph. She refused, saying "I only sign for people that buy the paintings." (those were selling for $10,000 to 45,000 a painting). Well, I whip out my album after the interview and ask her to sign it. She's smoking a cigarette and says, "No, no. I can't do that. I was told not to sign for anybody, other than the paintings." Her manager comes over, and I hear him whisper in her ear, "You can sign for him. Go ahead and sign it. He's press, and...it doesn't hurt to make a member of the media happy." So she signed it, writing something like "Josh, Keep "it" up, Grace Slick.

nicest guy for signing, i never seen him refuse anyone, beside that, who could take sugar ray robinsons punches like that, and last that long. this man was truly unique.