I didn't post a picture, because, well...we all know what that beautiful gatefold looks like when it's opened up to show the Fab Four. But wait, it gets better! This signed album has all of The Beatles signing in the yellow section, not over their black hair. That means they're all very legible. They all signed by their respective heads (not that that matters), and best of all...John Lennon and Paul McCartney, the ones sitting closest to the middle section that folds, don't sign over that folded part!

And how can you acquire this fine piece? Well, Heritage Auctions is starting the bidding on this classic album from 1967 -- the Summer of Love -- was starting the bids at $15,000. They expected it to reach $30,000, which is odd, since signed Beatles albums (with the signature on the front cover, as opposed to the back, where they often signed on the records that have been deemed authentic)...they've sold for over $50,000. And Pepper's is the Beatles album that most would prefer among all the albums (I still regret not buying the White Album signed by Lennon and McCartney on the front cover, with huge signatures, for $2,500 at a Beatles convention).

Dallas-based Heritage said that bidding has already reached $110,500, and they're thinking now it could pass the $150,000 mark. The consignment director, Garry Shrum, has been quoted as saying that an autograph of such quality will probably never show up again and "people are responding to that...it's taken on a life of its own."

Now, can you Beatles experts go find the photo and tell me if you think they're real? They all look great to me. It's only the George Harrison that I wonder about.

I think that the price is way over the top!

I am confused.  you want us to go find the photo as opposed to you posting it?

I'd post it just out of interest but the image magnifier won't work for me so here is the link and hope it helps.  It's up to $90k.

& an image of the COA 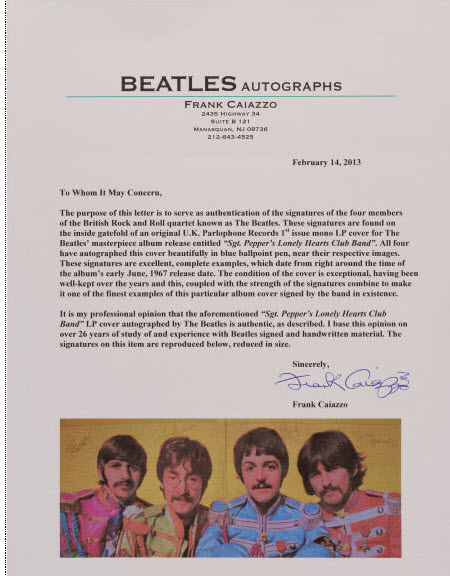 I think its one of the nicest signed beatles albums in existence.

I think so too. It's an extraordinary Beatles collection in and of itself.

Getting all four signatures signed that neatly on a laminated LP cover makes this one of the best signed albums you could evewr hope to own.

It's a beautiful, rare piece.

Heritage people know their material.  Consequently, I'm inclined to believe they knew the real auction value and put out the $30,000 initial estimate for PR/media purposes.  To what end?  I don't know...but I can guess.  And my guess would be that they want to create the impression of a booming market for such memorabilia.

Any other opinions either way?

Auction houses do that all the time.. when the auction is over they can say that this item sold for $100,000 over its estimated price.  Then magically everyone looking to sell signed Beatles items will call them up to consign.  It's a marketing ploy, clearly they knew the bidding was going to far exceed $30k.  Frank knows his stuff.. I wouldn't have any qualms handing over $100k knowing his name is behind it.

That's basically my view, too, Mike.  Thanks for the comment.

And, yes, I agree. If Frank says it's real you can take it to the bank.  His knowledge of The Beatles is extraordinary.