Hello to everyone, and thanks to the moderators for allowing me to become a member of this fine community. I’ve heard good things about Autograph Live and I support it.

I respect everyone's opinion as well about anything signed or reportedly signed by any or all members of the Beatles, whether I agree with their assessment or not. It’s clear you care about…

“Meet the Beatles” with in-person autograph collecting veteran John Brennan as you hear the exciting evolution of an uber-rare signed Beatles guitar obtained over the course of several years. From first getting George Harrison—who famously refused to sign guitars—on a pickguard in 1997, he meticulously formulated his strategy, getting Ringo on…

Steve, just curious about the other signed Beatles items in the auction, specifically, lot 227 With The Beatles album, and lot 229 Publicity Card. Are these items authentic signatures? The descriptions do not mention any certification.

A Sgt Peppers album signed by all four Beatles is being auctioned by Bonhams in Knightsbridge, London on June 29. I haven't seen any news coverage on it, so I wanted to get the word out.…

How many autographs do you think are real and authentic?

Would be very interesting to read a correct result. 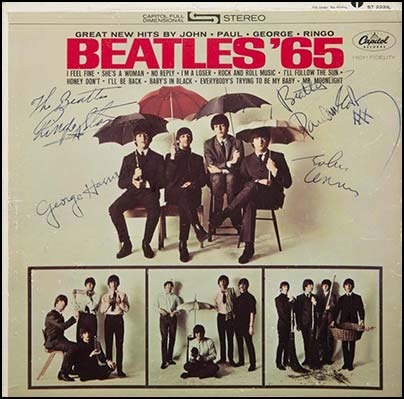 Julien's Auctions is scheduled to auction Lot 685, a band-signed "Beatles '65" album at Saturday's…

Beatles signed "White Album" up for sale at auction... 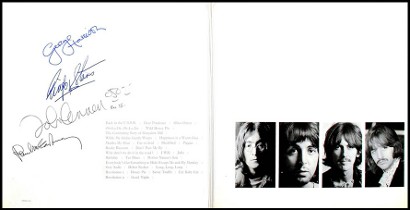 I purchased several Beatle autographed items 10+ years ago and am now wondering if the sigs are real or not ?!?!? Here are close ups of Paul and George.… I was recently in Las Vegas at Antiquities and being a newby I was excited about seeing all the history in front of me. I purchased a Beatles V1 signed by all four. After getting home, I had buyers remorse. I then began to check on COA,s signed by Chris Morales and found that his authentications have been called into question. I read your article on the Forgers Best Friend. I have since been in contact with the owner of Antiquities, Toby Stoffa by emails. I asked her for a history of this… 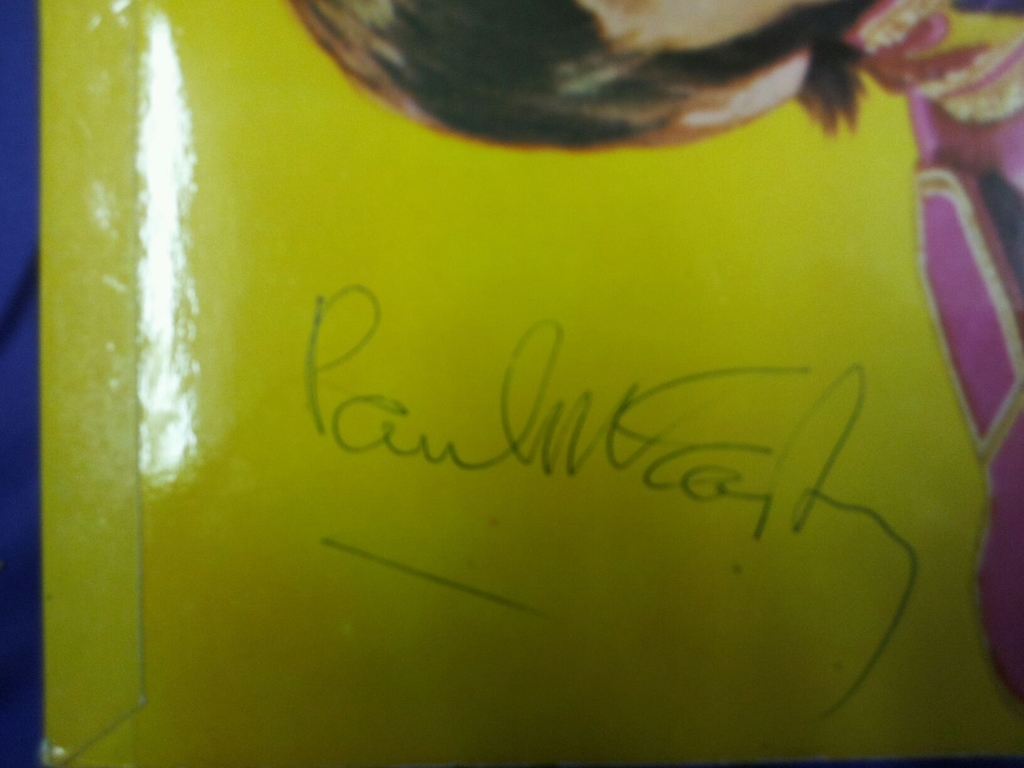 This is a mono 1st press UK pepper album signed by Paul. I believe it was signed summer of 67'.

I have a capital Meet the Beatles signed by George. Tell me what you think! All comments welcome! 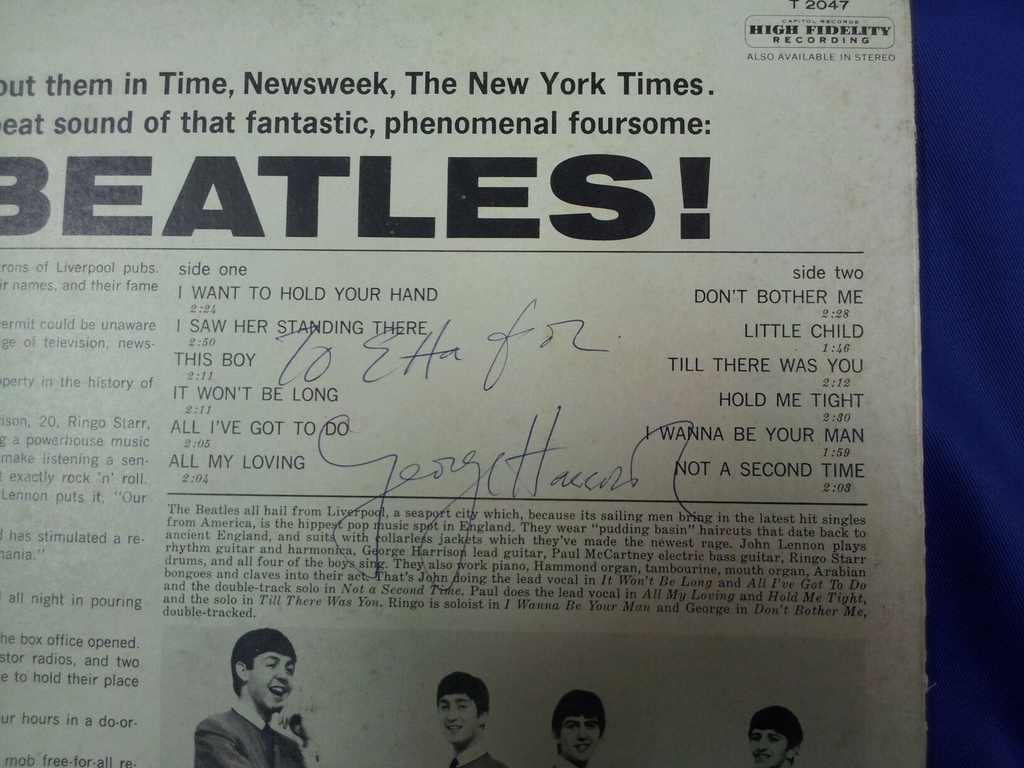 "Introducing the Beatles" Signed Album Cover: Is it Real?

I bought an "I 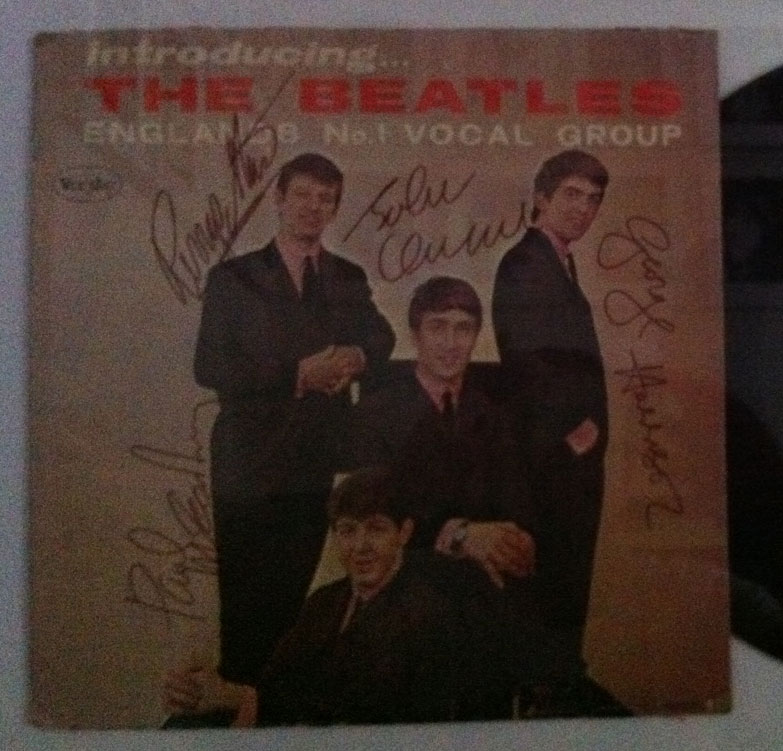 ntroducing the Beatles" album cover signed by all 4 Beatles, did all 4 ever sign this album cover or have I been handled?

In Reference to Autographs America out of Washington State.

I want to buy an autograph Beatles album from Autographs America, do you think in your opinion that they are authentic beatles autographs. They are priced very low.

Beatles history was made on May 21. On that day, Case Antiques, a regional art and antiques auction house in Knoxville, Tenn., sold a previously unknown "Meet the Beatles" album, signed by the Fab Four.

It wasn't the price that made history. At $63,250 including the buyer's premium, the price was good, considering it was the only music piece offered in an antique and art auction, but not a particularly strong. The Hard Rock auctioned a similar one around a decade ago for about…

The May 20th, 2011 Coach's Corner Auctions started about ten days ago.  They list approximately 4,000 items every four weeks.

Contained within those 4,000 items each and every month are usually between 2-4 Beatles signed albums.  They are usually "authenticated" by either Chris Morales or Ted Taylor (Stat Authentic/TTA).

His was a time before eBay, so John Lennon wasn't that jaded about signing autographs—if you could get to him. But few fans carried records around to be signed back then, so any album signed by Lennon since the early '60s is rare.
But not at Forever Legends, an autograph dealer in suburban Los Angeles. While Beatles experts might not be able to count up 10 Lennon signed Imagine albums, Forever Legends has had at least 23 on their website from 2007 to…
Continue