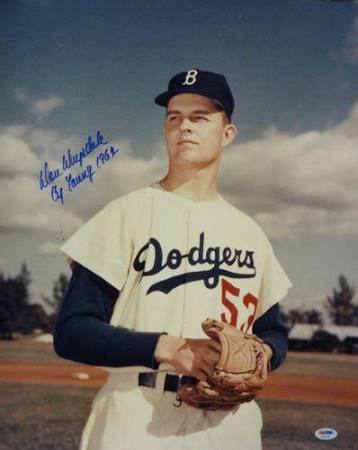 You know what I’ve given a lot of thought to over the years? What happens to my collection of autographs and sports/movie/music memorabilia when I die. Since I only have one kid, I just assumed she’d get it all. The problem is...I don’t want her getting ripped off if she decides to sell things. Let’s say I die when I’m 83 (which is wishful thinking, if you knew of my love of cigars and chocolate). There are going to be folks that tell her they can’t authenticate them, and they’ll low-ball her on the price.

My daughter is going to get mad that so many were personalized to me, since those are worth a lot less.

There will be many that she won’t sell, but keep for herself. We have a lot of the same tastes in music. I’m guessing once I get into my 70s, I’ll start selling off the items myself, as I’ll know how to go about getting top-dollar for it.

I’ve thought about what happens with famous people when they get remarried, pass away, and a new wife inherits valuable collectables.

Everyone was freaking out when Paul McCartney married Heather Mills. For me, the problem I had with it was...she didn’t seem like a nice person. I met her at a charity function with Paul, and she wasn’t friendly. I had seen her on interviews, and she didn’t seem that nice. Paul’s daughter wasn’t thrilled with her, either.

Well, we know how that turned out.

Had they stayed married and Paul died at the age of 85...what happens to all of Paul’s memorabilia? It would be worth millions and millions. The gold and platinum records with the Beatles and Wings, handwritten lyrics, and lots of other goodies. Would Heather have all that, or would the kids get any of it?

The reason people should figure this stuff out well before they die, is shown in this recent news story. Baseball Hall of Famer Don Drysdale died of a heart attack in 1993. Well, seven years before he died, he got married for the second time, in what was the only time two Hall of Famers ever got married. It was to basketball great Ann Meyers. She was a stand-out player at UCLA, and the Indiana Pacers offered her a $50,000 contract (she ended up not making the team, but made the Basketball Hall of Fame). She currently broadcasts for the Phoenix Suns and does a few other things in basketball.

Meyers was 20 years younger than Drysdale, which probably wasn’t such a thrill for his daughter from the first marriage. She’s even less thrilled now. You see, Ann Meyers Drysdale is selling memorabilia from his Dodgers days. There are 166 items, including World Series rings from the mid-60s (those have a minimum bid of $15,000), his 1956 National League championship ring, and the ball used from the final inning of his record 59 scoreless innings streak.

Ann said some of the money will go to a charity, and the rest to help their kids. She added, “Don would’ve wanted this.”

That statement leads me to ask...why then, didn’t Don sell those valuable things when he was alive?

Kelly Drysdale is furious, saying Ann didn’t inform anybody in the family, or even offer them any of the items. She said she grew up looking at the Cy Young Award on the wall, and would’ve liked that. Meyers contends these items were just sitting in storage, to which Kelly said, “If it’s just about getting them out of storage...offer them to family first.”

I’m betting Meyers isn’t letting go of the silver medal she won in the 1976 Summer Olympics. If she’s so concerned about money for her kids, how about she pawn or auction that thing off. I thought of this many times. I have stopped getting my items Personalized for this reason. No one is going to want a autograph made out to me. I don't want my years of collecting ending up in the trash. I think I am going to WILL my collection to a charity to be auctioned off. That way, I will know that it will go to someone who is going to treasure it

Very important post, Josh, and something I've thought about even though my collection isn't worth a whole-helluva-lot in the the whole scheme of things, but still, I do think about it.

me too, and I decided to tell my kids to have my entire collection certed by GFA, sell it at a loss and take the write off on their taxes.

I am trying to sell some of mine right now for my daughter's college needs.  Great post.

Guys just so you know I f you get something personalized on a glossy photo, you can easily removed it by using a white eraser. I done this a million times!!

Excellent post, but it would also be of benefit to address this problem (that we all face eventually) in a longer article.  When you reach 80 and know there are not a lot of Nationals left, it's time to think about a disposal plan. That plan is not uniform to all of us. Second marriage with first-marriage kids? There's a potential conflict.

The lesson is: Don't just die without a plan. Maybe start disposing when you're alive so that the surviving spouse doesn't say "Don would've wanted it that way." Notice that in this case she didn't say "Don wanted it this way." "Would've" means mind reading as in: "He was concerned about my future so I am turning his concern into dollars now, but I am also giving to charity."  If he had included his collection or part of it in his Will, there would be no issue over what he wanted with his collection.

Also there are tax implications. Keeping it until the death of the collector results in a new "basis," meaning that the cost is figured as the market value at the time of death. So, selling prior to death may mean capital gains tax for those of us who bought our collections, and the "basis" is the original cost if one wants to follow the law (and pay taxes).  Of course, Don Drysdale probably was not a buyer of his memorabilia.

But many of us are finding that much of what we bought is not worth more than we paid, probably less. The turn-of-the-century prices of most Brooklyn Dodger autographs (my specialty) have crashed, except for the autographs of Jackie Robinson (and those hasn't risen much).  So those losses can be offset against gains if the items are sold.

Since every one of us has related problems as we age, I hope Autograph Live follows up with another informative article.

And remember to tell us the results of the Drysdale sales.

Comment by Barry S on April 12, 2016 at 10:57am
When I die, my wife's new husband will sell my collection on eBay for penny's on the dollar to many of you. Probably use the money to buy new wheels for my truck.

I'm planning the first autograph tomb like the pharaohs.