All too often these things get put up for sale along with an Official Queen Fan Club LOA from the head of the FC herself. And the topic of the FC LOAs gets brought up to me nearly every day, so let me explain here. The letters from her oftentimes (as seen below) even going so far as to say "I can confirm they are genuine as I held them myself while they were being signed". Throughout the 80s and into the 1990s, like most successful groups, Queen could not keep up with the high demand for autographs. So their Fan Club stepped in (with what I believe started off as good intentions). However, instead of going with a set of stamped autographs, they decided to sign them by hand. Ok, they were trying to please the fans. But as the years passed and the Fan Club struggled financially, Jacky Smith (head of the FC) started offering these items for sale at Queen convention auctions along with an LOA she made herself (and signed off on). Thousands of these items had been sent out over the years to fans, and hundreds sold at official Queen conventions. One Miracle album really stood out about 3 years ago on Ebay as it sported an LOA from Jacky saying she held it as the band signed it, and that she hopes this "genuine" set will bring all the money needed for a young girl's surgery. The seller (the fellow with the ill child) attempted to sell via auction house and was turned down. He went to Ebay next, and after he was made aware of the item being fake, he pulled it. When confronted about this, Jacky deleted comments, blocked individuals and even claimed "the band was drunk when they signed it. Brian was so drunk he didn't know how to spell his name." Well, to believe that is to believe that the boys all drank heavily only at the Fan Club their assistants all said they rarely visited anyway, and being drunk somehow made them adopt Jacky's signature characteristics. I wish I could tell you I was joking. She even tried claiming the letters were forged and someone else signed the LOAs as her. When shown a photo of the latest Queen Fan Club magazine that she created with a lovely photo of her signature on the inner cover, she couldn't deny the match and just deleted all comments about it. She still denies it to this day. A number of us have confronted her over the years and have been blocked from all routes of communicating with her since failing these items. You could say she's not a fan of mine for sure lol. But calling out fakes doesn't usually make a guy popular anyway. I normally advise people to not use her name when discussing these items but I've just stopped a young man from dropping 3 grand on this stuff and he nearly went for it anyway because it had her LOA. And when an LOA from her reads "I held it as it was signed", in regards to a fake item...I'm not left with many options in keeping her name under wraps. I do have to say I think what she did she did to keep the FC afloat, and perhaps to help people. I do not think she pocketed any cash herself, as from what I understand, the money made via conventions goes back into the FC. Doesn't make it right, but I've seen people forge for worse.

Anyway, this post is to show you the different styles and the evolution of the Fan Club secretarial.

The early 80s: In what I can only assume was an attempt at an early 70s loop at the end of Freddie's name, you'll see what ends up looking like a "whale's tail" at the end of Freddie along with very short D's. Brian was signed with a strange boxy B, and John was sporting a #4 shaped J. 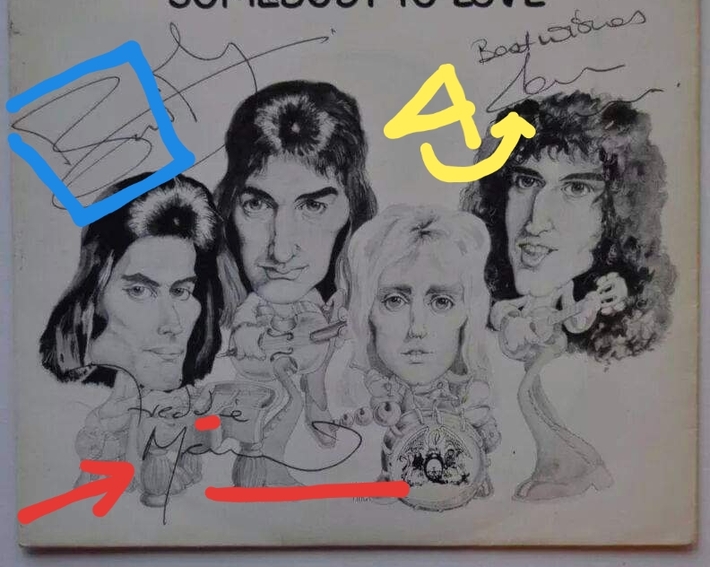 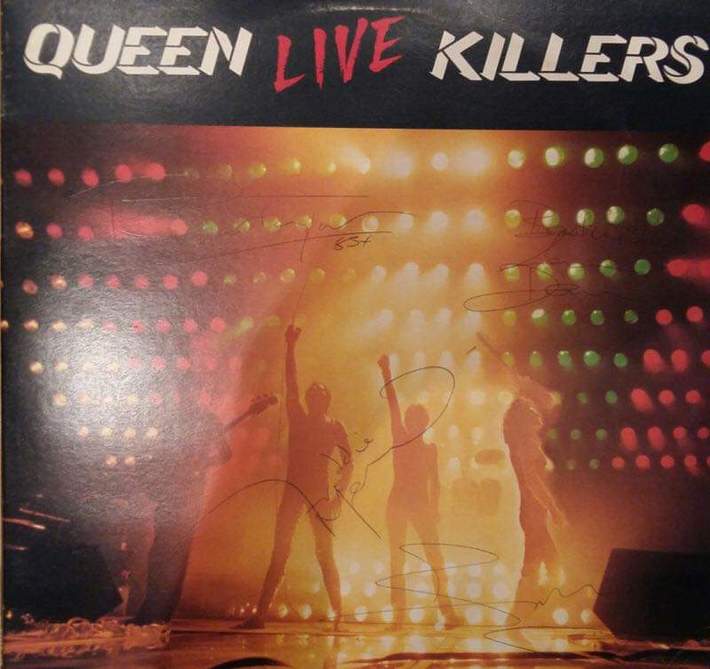 Mid 80s: Freddie was drawn with very tight "waves" instead of "ercur" in Mercury and would end a very....familiar Y shape. John stays nearly the same, Brian is given a more rounded B with another very familiar Y shape, and Roger ends with the R in Taylor pointing up and out. Late 80s/early 90s (a new helper): A new set of hands helped out during this time.  Preferring very straight lines with Brian Roger and John, and a strange outward "V" shape instead of the looped Ds on Freddie. These days, Freddie is no longer signed to items by the FC, and John Brian and Roger try to send in genuine signed items each year to be auctioned off at the Queen conventions. However, even still, it's not uncommon to see a 3 member signed item with 1 or 2 of the members being secretarial at the convention auctions. If they feel it can get more money for their cause and the guys forgot to sign or John's P.A is not available to contact him, they'll make do somehow. And it will include an LOA from the Official International Queen Fan Club, signed by you know who.

These things are on Ebay daily, so to those new to Queen, please have a look at these before dipping your toe in the water. They're a pretty easy fake to spot, but I understand some people may feel the LOA from the FC is proof enough to take a chance. Hope this helps someone out there.

Hi mate,  I've witnessed some of the discussions with the person you are referring to.  I totally x2 your statement.

Thank you very much, great job.

If I am not wrong, you recently wrote (possibly here) that there are also "non secretarial" fakes with the FC LOA around, because they also issued LOAs on other people's signed items on request.

Is this correct? Is it something they still do?

Hi Carsan, that is correct. I believe it might have been this item you were referring to. A fake item not signed by the FC, but "authenticated" by them. Upon request, she does still issue LOAs for items being offered at Queen conventions (any and all fans who pay to enter can offer their own signed items for auction). So what you're left with is a person who doesn't know Queen autographs authenticating items and issuing LOAs from not just the FC itself, but from any fan who picks up an item on Ebay and wants to flip it at the convention. In my 40 years as a fan and collector, I think I've heard of/seen the FC fail...maybe 10 items. As long as it's not signed in crayon, they usually issue an LOA lol. 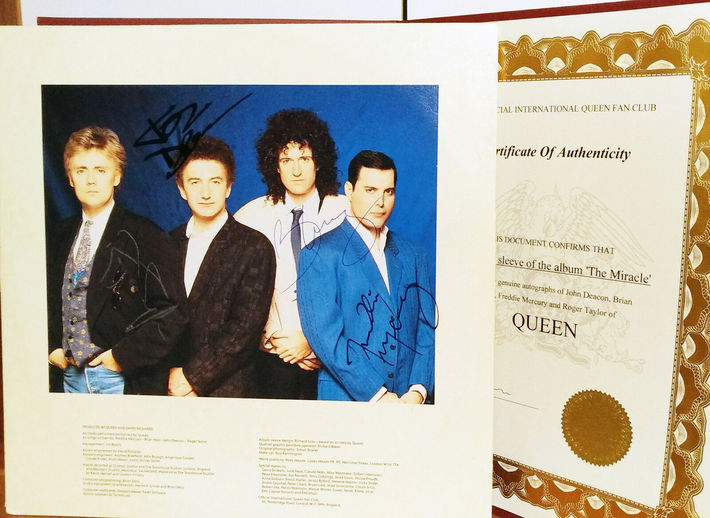 Brilliant work as ever Innuendo.

Thanks for that, MarkG. Hope the new year is treating you well