What do you think about this Apollo 11 crew signed postcard?

Thanks for any opinions :) 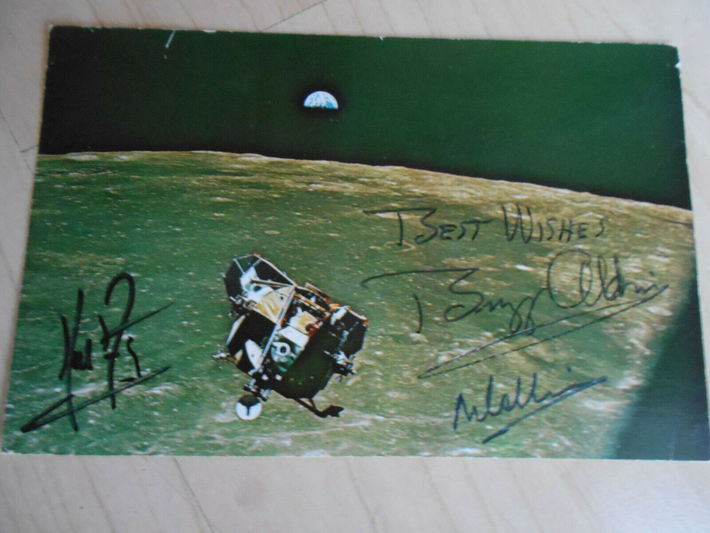 I could be wrong but appear secretarial or other. Steve Z is the man to ask.

Looks pretty good to me.

Buzz Aldrin's signature looks really good. The handwriting looks spot-on to me. However, it looks like a somewhat recent signature (from the last 20 years or so). Neil Armstrong stopped signing about 30 years ago. That doesn't mean it's fake, but it's something to note.

Collins looks good to me, but his is harder for me to immediately identify, especially the "MCollins" shortened version.

I'm 50/50 on the Armstrong. The overall form is really good. At first glance, it looks great. But there are a few uncommon traits to it. It's a more small, cramped autograph than usual, and with a thicker pen that obscures some of the details, especially in the "eil" portion of his first name. I can generally spot an authentic Armstrong immediately, and I can usually spot a forgery immediately. This one's a bit harder. It's not an obvious fake, but it's atypical enough to not be obviously authentic.

As Eric mentioned, Steve Zarelli is the expert. From his site, you can get a quick email opinion for about $15. If it passes, you can then choose to mail it in for a full authentication, which will raise the value of this item by over $1,000. Among space autograph collectors, a Zarelli COA is the only one that's trusted 100%. So it's a great investment, and the best way to know for certain that it's real.