This beautiful autograph of Paul inscribed to....... Paul ended yesterday on an Ebay Auction.
I really wanted to buy it. I really wanted it. It's so beautiful and unique.
And I also love so much the unplugged album of Paul.
My highest bid was $586 and the item was sold for $596.
What a painful loss. All week I've been waiting to win it. I'm so disappointed.
It was a one-time opportunity to take a special item for a low price. It will take me a while to get over it.
The CD booklet also contains the autographs of Paul Wix Wickens and Hamish Stuart. What a loss....... 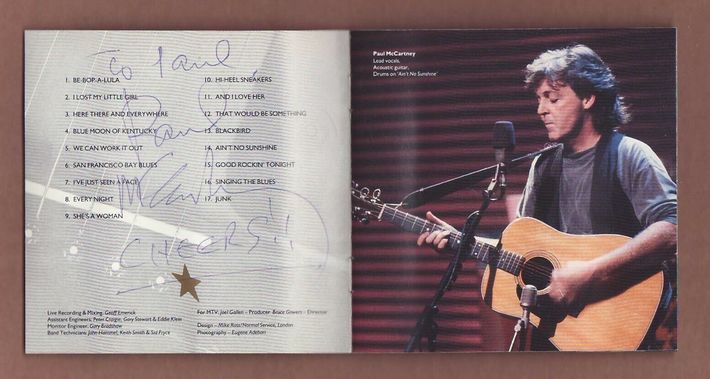 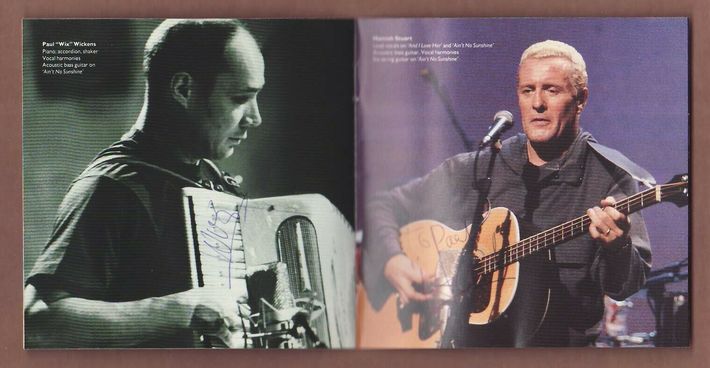 That's a cool piece. Sorry, Daniel. I'd hate to have missed it too. The massive number of McCartney forgeries has collapsed the prices of McCartney autographs. That would have been $900 in a heartbeat a year ago.

Agree Steve. There are so many certified Mccartney's on eBay right now, you would think he is a dime a dozen. Unfortunately so many aren't real. What I like about this one is it being signed in pen. I understand people like a bold signature, but to me, an ink signature has that vintage appeal to it.

I like that, too, Adam. It feels much more personal.

That’s very true. I’ve never seen it this bad, and it seems that the mistakes are rarely being corrected.

Daniel, I’m sorry you missed out on this authentic one. I also know how you feel.

I can empathize with you, Daniel.  It feels lousy when you just miss a piece you really wanted.  I’ve been there.

As for McCartney prices, they don’t seem real low to me.  It seems like almost every seller on ebay is asking for a minimum of about $1200.  Many are over $2000.  And it doesn’t seem like you can get them to budge.

Two maybe three years ago, I was able to get a Paul McCartney signed High in the Clouds with a JSA LOA for $630.  I ended up selling it, regrettably, just a few months later for $650 because I was gathering funds to purchase a Babe Ruth autograph.

I’d love to have another one.

I sold a Flowers in the dirt CD signed by Linda and Paul and a LP cover with a rather bad Paul signature both for around 500-600$ and couldn't get much more. Sometimes people think that the prices that are asked are the prices that will be paid. That might be true sometimes but my experience shows that mostly items are worth much less. For example if it comes to Joni Mitchell everyone is telling you that it is a 800+ item. I have a nicley signed LP cover in great condition with a unrushed signature and would be happy to get 550$ for it but no one cares.

We know how you feel Daniel...

The auction started at a very low price ($5). Yes, I really wanted it, but I wanted to buy it at a reasonable and low price. I can buy an autograph of Paul McCartney at a high price everyday.

If it didn't fit what your allotted $ was, you are upset it didn't go for less I think, not missing it. You would have bid higher as you say. Don't worry about it - you probably thought this would happen, no?

when I see an item like this, I wait until the end and then input the max amount I would be willing to pay.  That way, if I lose it, I dont kick myself for not bidding higher.  Twice this week I did that and ended up with two great items at very low prices, not even close to my max bid. sometimes it works out.

+1 I have an equation I use when necessary.