looks rushed but ok in my Opinion......or did i go wrong ? Whats its worth?? Thanx for Response ! 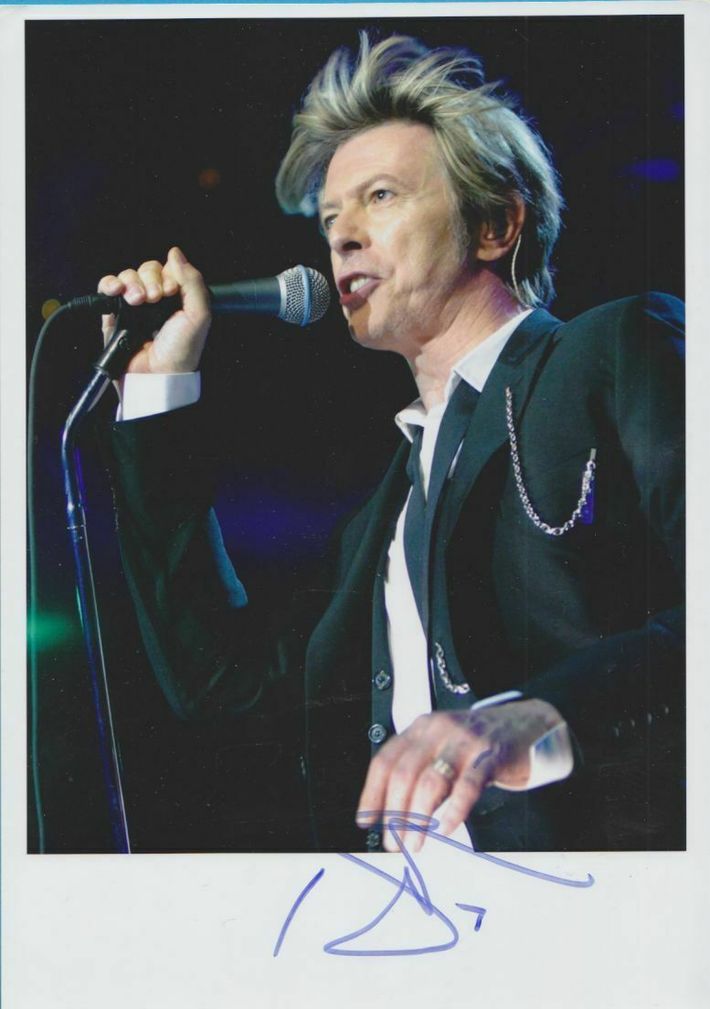 Well, I do not like it. Even if it is real, then I guess it would be absolutely impossible sell it in the future. Wait for Eric or Mark. :-)

Wait for Eric or Mark

Not for me. Very atypical construction and "B", and the apostrophe is normally above the paraph. I don't recall seeing one underneath.

With the atypical "B" and the apostrophe being where it is - could be IP rushed (general form and solution to the "ie" is "correct" but quite odd in execution), but so far off the usual track I would avoid. A tough sell at very best.

Note: Undated Bowie's account for perhaps 10% of all authentic examples. The date of this photo does fit in with the undated nature of the signature but I am still not comfy. MarkG is needed for these later years.

I am not going to be popular here BUT I do believe it's very probably a genuine rushed autograph by DB. I thought the same thing when I first saw it on the auction house's site.

As Eric would say, if you have half a doubt or it doesn't look right, avoid.

Sara has a great eye now and rightly does not trust non classic traits.

It isn't a classic Bowie signature, but it has many of the nuances of a very rushed genuine signature including a left hand signing.

Would I buy it - no because it's not classic.

Would I buy it if I didn't have a Bowie but needed one in my collection?  Probably.

Would I stake my house on Bowie having signed it? Yes.

Hi Mark, I felt it might from the proper "owie" solution (just very vertical here - "snub- nosed Bowie" like my old 2010 CD), apostrophe itself appears right but placement threw me. That paraph looks good as well.  You know these years far better than I. ;)

Hi Mark, nice to see you!

I would say if it is real then it can become a great value for whom it was signed but not for anyone else, because it's not a "as you say" classic signature. A lot of people will doubt about its genuinity - so hard to sell in the future. I wouldn't want it in my collection, and I'd rather wait - Eric taught me that. :-)

But have to admit that it is signed by left handed at least, but I really do not like the sharp from flop to "o".

LOL Mark, I think your station (to station) is secured! :)

Here's a spot on example of a rushed 2006...and even then, from his concentrated face , it looks like he's signing carefully!

Disclaimer: " I have NO personal or commercial interest in the signature in question" apart from my house of course...