Closing notes: It is sometimes said that Gleason's wife signed for him. She did! Marilyn Gleason, starting early, in about 1965. Gleason was married 1936-1970, 1970-1975, and 1975-1987. From what I have seen the "My Best Wishes" secretarials, which represent the overwhelming majority of signatures, start to appear on photographs from about 1975 on. The presence of this inscription does not equate with being a secretarial, but this is often the case. I also note the lack of any transitional examples of the secretarials. The little I have seen appears forged or unusual in some odd way. His authentic signature mutated slightly over the years while retaining basic elements, yet the secretarials just change violently. I have never seen the 1960's style secretarial signature shown in the composite above, whose appearance seems to correlate with his move to Miami in 1964, on anything but these small photographs from this period.

Thank you very much Steve. I hope it furnishes collectors with an idea of what to look for and what to avoid. There is little data and less specifics online detailing this earlier material, and although the 70's secretarial is well covered it still sells frequently as you know.

Hello and thank you for the kind words and assistance. I appreciate the loan of your own wonderful vintage Gleason album page, and have added it to the post above to keep things together. In some other threads, after a while, you don't know who is talking about which, so I am trying to keep everything clear, linear and labeled. I have also added a link to thecead page for Gleason. I have a lot of scans, but won't show things w/o permission. I have asked other members to send in what they might have. 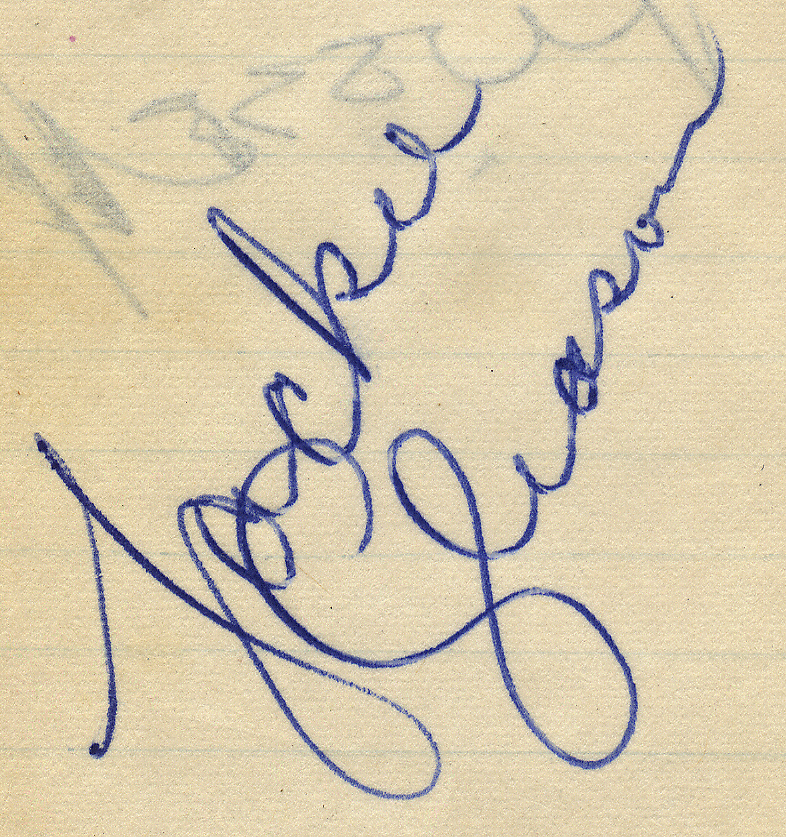 I was able to make a decent scan of this new Gleason album page. I post it here for study/discussion. Early ball point signature, August 1951. Clicking on the image will show the entire signature.

I have an earlier example to post of the 1st type of secretarial - shown below along with the later more common secretarial version on these cards and the authentic example. I saw that one Eric, and yes, its very nice but pricey.

Gives a good look inside that "a".

Permalink Reply by Christopher Williams on January 3, 2016 at 5:29pm

I once spoke to Joyce Randolph on the telephone about the signing habits of Mr. Gleason, Art Carney and Audrey Meadows and she told me that she never saw Mr. Gleason sign anything.  Everything was signed by secretaries.

those secretarials were thought to be authentic for years. It was only in the last couple of years they came into question and were deemed as secretarials.  The authentic versions, are very rare.