Last night I saw a commercial for a car. Well, I think it was for a car. I don't pay much attention to commercials. Chuck Norris was standing there (or maybe kicking and punching, again...I don't pay much attention to commercials). Then the person buying the white Ford Bronco or whatever vehicle it was, asked Norris to autograph it. So he took the black Sharpie and signed the hood of it.

Now this morning, I'm watching The View. It's an awful, awful show, but I'm working on the…

First, let me state something. I DO NOT want this website to become a place where people fight regarding politics. Second, as much of a doofus as I think Donald Trump is, I find it disgusting when people compare him to a Hitler, Nazis, or the KKK. But...that being said...this meme is still funny… 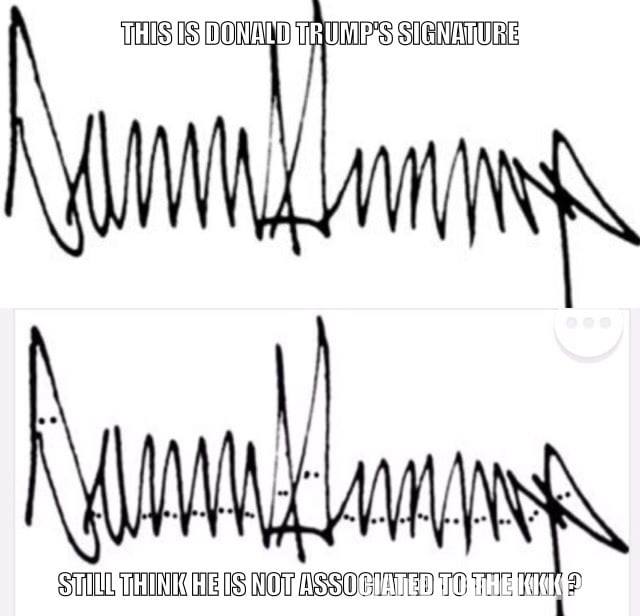 Cohen is probably best known to people for the character Borat he played, in a very bizarre and funny movie. He pretended to be from another… There was a story I read in one of the newspapers last week. It was all about autograph shops and memorabilia places. Of course, my interest was piqued. Unfortunately, it only dealt with one kind of autograph -- Donald Trump. Specifically, the fact that he's now "President Trump" (no matter how you feel about him, you gotta admit...it's weird saying "President…

Oddly enough, the Cavs trip to the White House happened the same day president-elect Trump had an hour… No matter how you feel about Donald Trump politically...or how you feel about his hair...or his horrible reality shows...etc etc etc...there’s one thing we can all agree on. The dude has a cool autograph. Now, if you want a signed copy of his “The Art of the Deal,” you can go to his main website and… George Zimmerman's Gun, Thomas Jefferson's Hair -- Which Would You Want?

I’ve never liked the idea of buying hair. Wait...I should probably explain that. I’m not talking about the way Elton John bought hair for $28,000 and had it surgically attached to his head. I’d certainly consider that, if I didn’t end up looking like Donald Trump… I don’t like politics. Never have. Now with all this social media and Facebook, you see how many friendships end based on disagreements about it. It’s also baffling how so many people get things wrong about the candidate they support (or hate).…