I remember when the story broke last month about handwritten lyrics to Elton John songs being auctioned. It was the perfect time, with Rocketman being released (a very disappointing movie; my review appears here: https://fox5sandiego.com/2019/05/30/rocketman/ ).

I immediately thought -- these songs will be of less interest than most, because...Elton John didn’t write his songs, Bernie Taupin did (well, Sir Elton did write Crocodile Rock, and the songs on the horrible “A Single Man” LP). 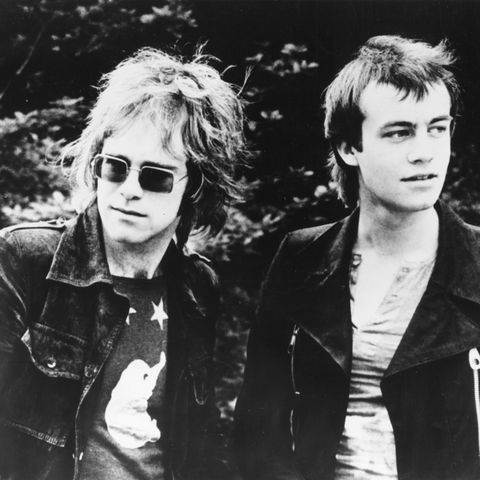 I also wondered why Taupin would sell these, until I found out it wasn’t him, but his ex-wife Maxine Taupin selling them. They were married for five years in the early to mid-70s, and she decided she’d make it a very merry Christmas, but auctioning these at Bonhams in December. She was apparently the inspiration for “Tiny Dancer” but...I’m not sure if that makes the lyrics more valuable.

The Border Song ended up selling for 24,000 pounds. I always felt that was one of the more underrated tunes of the pair. One of the best ballads ever (and one of the most often played at weddings), is “Your Song.” It brought in 180,000 pounds. “Bennie and the Jets” took off and reached 67,000 pounds. It also had a verse in it that wasn’t on the recorded version of the song.

The handwritten drafts of the tunes “Goodbye Yellow Brick Road,” “Candle in the Wind” (my pick for most overrated Elton song), and “Saturday Night’s Alright for Fighting” never sold. 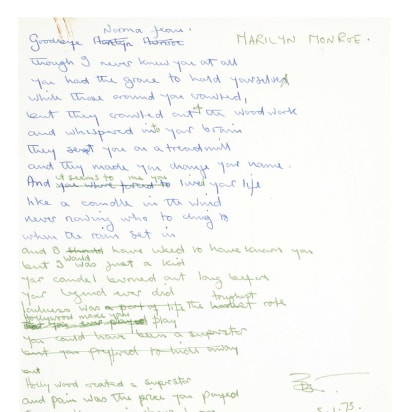 In an interview with Rolling Stone, Maxine said she didn’t know how she ended up with the lyrics. That made me wonder why Bernie didn’t sue. Obviously, he doesn’t need the money, but...he could have donated them to charity or something.

She had some of them framed hanging on her wall, and a few were in bank vaults, and stayed well preserved.

What a treasure to own!!!

Elton John is my favorite artist of all-time.

My favorite tune is "Skyline Pigeon."

"Empty Sky" and "Tumbleweed Connection" were just a glimpse of things to come.

I have an album signed by Elton, Bernie, and guitarist Davey. I'm a huge fan.

Favorite songs for me (in no particular order): All the Girls Love Alice, Grey Seal, Yellow Brick Road, Saturday Night, Someone Save My Live, Bitch is Back, Border Song, and...my guilty pleasure that I don't admit to loving -- Don't Go Breaking my Heart

The only album of his that I dislike was his disco album (the only album I intentionally forget the name of).

Too many great songs to mention.