Since I’ve collected lots of things over the years, I’ve always feared theft. For some reason, I’ve never had that concern regarding my autograph collection. Most of them are stored in boxes, and I doubted anybody would find them or if they did...would care about a bunch of hard-to-read scribbles on index or business cards.

When I was younger, I framed all my good items. Record albums, old Fillmore concert posters...so I doubted anybody would come into my house and swipe them. I figured if burglars broke in, they’d grab my 8-track stereo and TV set. They wouldn’t worry about framed things on the wall. I’m guessing thieves would walk by a Jackson Pollock painting looking for a jewelry box in the bedrom (not that I have a Pollock painting, or a woman with jewelry, but...).

I saw this story making the news, and it got me thinking about thefts again.

In Washington, a man named Richard Bates (no jokes here, please) came home to find collectibles missing from his shelves. I immediately imagined a house that looked like Steve Carell’s in The 40 Year Old Virgin.

Someone from the dark side broke in, and stole $30,000 worth of his collection. Although I was immediately wondering something. Why didn’t they steal his entire collection? It makes me think that there’s a slight possibility we might find out the dude made a bogus claim, I don’t know. 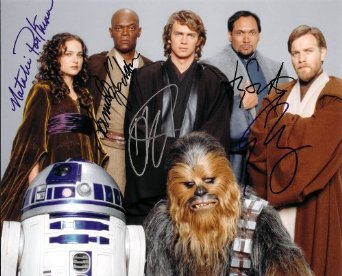 Bates said he has his life savings in his collectables, and some of the toys he’s had to buy over and over (I’m not sure why that is). He also mentioned they bring him a lot of happiness, which is something all of us collectors can understand (although my mom always asks how I can get enjoyment from a stash of guitars and framed posters that are stored in her garage, but I digress).

Of course, all the news agencies jumped on this story. With the new movie around the corner, it was perfect.

They were also able to show his few Star War tattoos.

I think George Lucas or someone, should reach out and give him a tour of their studios, and a signed poster. That would be as valuable as all the crap...err, collectables….that he lost. It would also be the experience of a lifetime.

[Side note: actor John Boyega, who was so much fun in the British sci-fi comedy “Attack the Block” was at the San Diego Film Festival, and signed lots of Star Wars memorabilia as he was walking the red carpet. Attend film festivals, it’s a great way to meet these folks]

So, have any of you had to deal with a theft?

Thirty years ago, unless you were into a hobby, you would have no more than a general idea of how much money things were worth. Today, there are endless resources to determine value of a million different items, making it easier to form a plan for theft. I think of the book dealers I see at library book sales and flea markets, using their cell phones to scan UPC codes to see if a volume is worth buying to resell. They can scan a hundred books in minutes-I've seen it happen. No different than any thief with a smart phone, who could literally stand inside the home they just broke into and search ebay to see if that signed guitar on your wall is worth stealing. And think about the change in media today, where sales at auction of memorabilia items are routinely reported, especially if high dollar or record setting. The recent sale of Springsteen's hand-written lyrics to "Born To Run" as an example, anyone reading that story would be predisposed to think ANY lyrics framed up nicely and hung on your wall were worth a lot of money......I've always had the thought process that if someone stole my autographed stuff from my home, they would have limited avenues of disposal for them- easy to track on ebay and private auctions, so they would have to flip them on the black/underground market. I've taken care to photograph each item I have, from multiple angles and to mark them as mine (in remote places) so that in the event of a theft, I have some means of proving they were mine in case one of them is located after the fact..

Great, great advice. I, too...have done similar things. My high end items, I mark somewhere nobody knows about, so I could identify.

Have have had to deal with theft recently,I ended up mailing an Item and got my my address crossed on the package and sent to a guy I know from a autograph site but the package was addressed to someone else,both lived in the state of Texas and easily crossed up the address package got delivered and the person decided to keep the piece for himself.But as far as a home theft several years ago my ex-spouse had a boyfriend that was into the hobby as well and I had stuff stored away for my son when he was old enough to enjoy it.Anyhow he was a shady character and was selling stuff under her nose and she never noticed as she did not care much about it so for a good year in a half I would see my stuff pop up in local card shops for awhile.

Best story ever...I was waiting for autographs of some athlete. I usually don't bother with athletes anymore. I'm more into actors and musicians. Well, this guy sent a picture of Yogi Berra for him to sign. just a regular action photo, 8x10. Well, what he got back in the mail a month later....was a photo...with 20 hall of famers. The photo was signed by all but two players. Obviously, Yogi signed it, and sent it back to the wrong person. This guy....needless to say...was thrilled. And he told me he didn't feel guilty keeping it because...how could he possibly go about finding the right person? It was sent in HIS envelope SASE..

Just so you know, that prequel trilogy cast signed photo is not authentic.

He should feel guilty keeping the photo- because it's not his. There are more than a few things he could have done to rectify the issue- a simple letter to Yogi stating that he got the wrong photo back and it has much value would be a start- if the other person contacted Yogi, he could have put them in touch with each other- I imagine a nice reward would have been offered. All you have to do is imagine if it happened to YOU, and you lost something you hold dear, something you put a lot of effort and money into. I think it was really, really dumb of the owner to send a valuable thing like that through the mail but that's besides the point. Shame on the crook who kept the wrong signed photo.

Terry, you're right. He should feel a little guilty, but...I could tell he wasn't relishing in his treasure. He honestly had given it some thought...thinking...are Yogi's people, or his wife, or personal assistant, even going to care? Or spend much time trying to track down the person, or waiting for the person to send a follow up letter, etc? I mean, if somebody does autographs in the mail...they get soooo many sent to them. A perfect example is former NFL quarterback Brian Sipe. I interviewed him (it appeared in Autograph Magazine, and had some great stories). He didn't sign in mail, and was a football coach at a high school, and got 4 or 5 requests a day. Imagine what a Hall of Famer like Yogi gets!!!

Comment by Steve Zarelli on November 8, 2015 at 4:16am
RE: the multi-signed photo that was sent back to the wrong person.

This is precisely why I put my name, address, email and phone on the back of any multi-signed piece I send out. Even when I send something in for a private signing. It may prevent the accident from happening in the first place, and if it does, hopefully the person who received it in error will contact me.