I am going to give you the best Beatles autograph story ever, and one of the worst. First, I’ll start with the best. Years ago, I met a guy at a party at a fancy mansion in L.A. He was one of those old dudes, that had all white hair, in a long ponytail. You know the type. But he was really interesting, and a great storyteller. And he was the kind of storyteller where you believed what he was saying, because the stories weren’t over-the-top. We talked for a long time, and when the subject of jobs came up, he told me about something he did in Hollywood. I forget now, but I think it was a cameraman. I asked him the various films he did, and a few I had heard of. Many I had not. Somehow the topic of me having a lot of pieces of movie memorabilia came up. He mentioned having a storage unit with a lot of memorabilia as well. When I asked him what the coolest items were that he had, he said something about one of the heads from a terminator from the movie Terminator. He didn’t work on the movie, but a good friend of his did, and he was always on the set, and somehow acquired it. The other item he mentioned were guitars. He said he was working on a Beatles movie, and during one of the breaks in filming, he came up with an idea. Since he always had an acoustic guitar in his trunk, he got it out, and had the Beatles all sign it. A few days later he thought about it. He had owned that guitar for years, and it was scuffed up and not in the best condition. So he went to a music store and bought a brand new acoustic guitar, and again had the Beatles sign it. So this cat had TWO guitars signed by the Beatles. Just amazing. Obviously, I tried talking him into selling one (even though I wouldn’t have had nearly enough for even buying one of the guitar strings off it). He’s someone that doesn’t care about money, but even at that, I told him they could be getting damaged in the storage units, they could be stolen; the possibilities of all the bad things that could happen were endless. Now, on the subject of Beatles movies, comes the worst of autograph stories. In my latest issue of “Variety” I was reading a story about a guy that has a book out. HIs last name is Birkin, and he talked about how he got started in movies, with his first big film being “2001: A Space Odyssey.” His sister was a famous model, and he started out as a gofer, before moving on to much bigger things in film. He was an assistant director on “Magical Mystery Tour,” and had to go get John Lennon to the set. He was smoking pot in his psychedelic painted Rolls Royce. The guy handed a script he wrote called “Jude the Obscure” to give to his girlfriend Jane Asher, since he wanted her to play the lead. Paul asked what Jude was, and he said a name (which I’m guessing Paul kept for a future song!). Anyway, there was a scene in a ballroom with 100 dancers. The generator broke and they all had to wait around an extra two hours. They weren’t happy about that. He said when he talked to the dancers, he found out they were huge Beatles fans. So he found out they would stay if they could get Paul and John’s autographs. Paul was fine with that, but John said, “I’m not going to sign a hundred bits of paper.” This guy said, “You don’t have to. I’m a good forger.” He went on to explain how he forged their autographs when he was in America and needed quick cash. So, this guy forged 100 autographs of the Beatles and gave them to the dancers, who were thrilled. He said they headed home “nursing their precious autographs.” 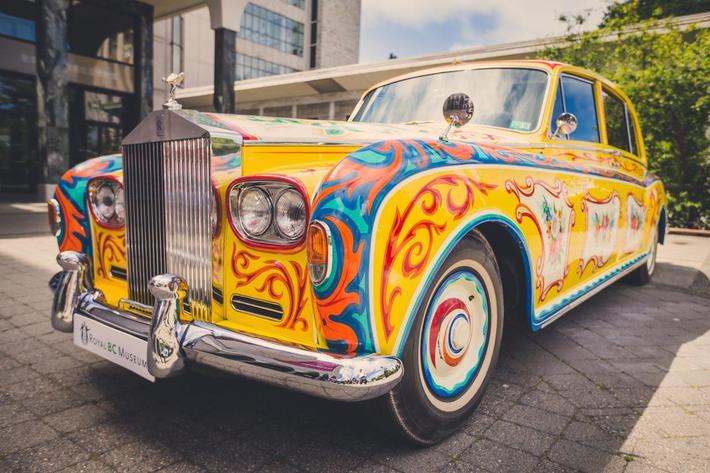 He said karma got him back when the movie came out, and the credits had his name spelled wrong.

Anyway, it made me think how we all hear those stories about “My grandfather died and left behind this Beatles album that was signed” and we all inform the bloke it’s fake. Imagine these dancers, who were actually in a Beatles movie, and passed these fake autographs down in their family, and how they won’t believe us when they come on the website to ask what we think and we all say “fake.”

that is similiar like the rolling stones used to forge each others autographs.