(apologies in advance for the length of my post)

Hello, my name is David Kuflik and I believe I may have one of the best celebrity autograph collections on the planet. My father (Harvey Kuflik) and aunt (Rhoda Kuflik) started collecting in-person autographs in New York in the early 1950’s and continued vigorously collecting their whole lives (Harvey passed in 2002 and Rhoda passed in 2012). Both collected for the love of it and didn’t sell their autographs. Their collections are fully intact and almost all of them were collected in person. My father also acquired a couple smaller autograph collections from his collecting friends in Hollywood.  I collected actively with my father in Hollywood as a kid in the 1980’s. I inherited their collections and after working 17 years at Microsoft, I left my day job and have dedicated the past two years full time curating this collection.

My celebrity autograph collection is going to be featured in a dedicated 30 minute TV episode on a major cable network in the coming weeks.

What am I going to do with all these autographs? I’m going to sell them. I did a small auction with RR Auction in September. http://www.rrauction.com/past_auction_results.cfm?SearchCrit=kuflik...  .

I’m currently in their February auction with some modern autographs. See here. http://www.rrauction.com/browse_gallery.cfm?SearchCrit=%20%20&C...=

I plan to use RR Auction at the high end of the spectrum, but that only covers a few thousand items. For all the other autographs, I plan to sell those directly to consumers along with my unsigned headshots from my website (hasn’t launched yet), via eBay, and Amazon.  I’ve decided to roll my sleeves up and sell directly because there is just too much sweat equity in these autographs to sell in bulk at wholesale prices. I have no plans to ever acquire autographs from outside sources. I’m just a guy who inherited this awesome pristine collection and will exit the business when everything is sold.

It’s also worth noting that I also have several hundred thousand original unsigned Agency Headshots with resumes of almost every actor and actress from the late 1970’s until 2004. These headshots were actually used in the casting process and nobody else has these in any quantity. Many of the photos are not on the Internet. I never sold autographs but I sold these headshots on eBay in the early 2000’s under the name risingstarphotos and they were very popular. We were the top seller of the Movie photos category on eBay for years.  I’ve never sold autographs before but have a lot of past experience in the memorabilia business selling headshots on eBay at high volumes.  My father got over 3,000 of these headshots signed, many before the actors were even famous.

Here's a glimpse of the b- list signed headshot collection. I’ve put aside hundreds of a-listers in a different folder: https://1drv.ms/i/s!An5aCe8YraAGhr4Mq3b8WlWlOgJdug

Here’s is where it all started:

There is sooooooo much more than this in many different forms (Lobby Cards, Books, Color Photos, Candid Photos, Cast Photos, etc.) I’ve been a lurker here on autograph live for the past two years and thought I would introduce myself before my TV episode airs. I’m also hoping to learn from the experts here and gather feedback and reality checks on my business approach. Unfortunately, the autograph ecosystem is full of forgeries, which hurts the industry. I’m hoping I can inject some needed authenticity into the business.

Permalink Reply by Mike T on January 31, 2017 at 9:20pm
I've bought and sold a few collections no where near that scale and it's a ton of work to get the most value out of it. You have the right idea, just stick with it and part it out to the right collectors.

With a collection of that magnitude I would hope any auction house you use is giving you <10% consignment fees. If not, negotiate for that for sure.

If you have Star Wars stuff, send me a message, I'll buy it :)

I saw what you sold thru RR...there were some FANTASTIC autographs! Your collection is unbelievable...in a good way.

Do you have a Marlon Brando signed Godfather photo?

I've got a few Marlon Brando signed photos but unfortunately not in the Godfather role.

On the Godfather subject.....if you happen to run into anything signed by the 1950's to 1970's character actor Al Lettieri, I have been looking for one for years.

Noted. I'll keep an eye out for Al Lettieri. I found a John Cazale so there is hope.

On that note, I haven't really dug into all my autograph books from the late sixties and early seventies yet. Last time I did, I found this. 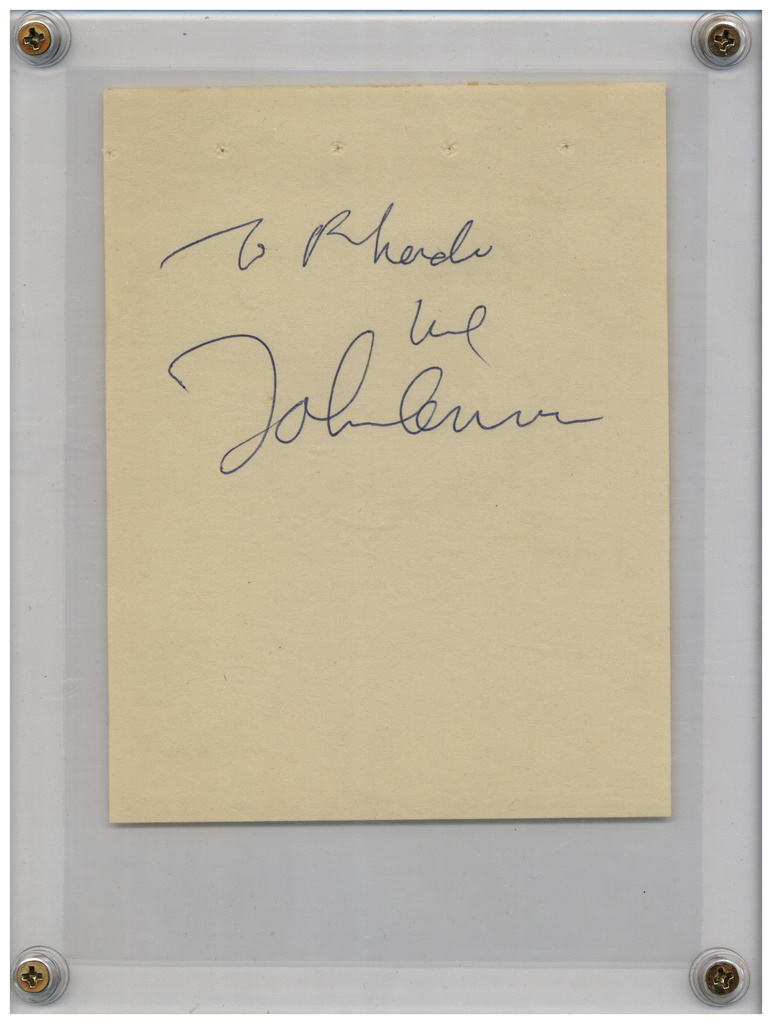 Thank you David. I have to say, when I read the header to this discussion, my mind went right to "Here we go again."

I have received several messages like this one in 3 decades of collecting, and when I hear that someone believes that they have one of the best collections out there, it is always a disappointment, filled with TTM secretarial autographs and forgeries bought over a lifetime. You my friend have the exception that proves the rule. Seeing only a fraction of what you have in your possession.....impressive, most impressive! Congrats!

I certainly won't tell you how to market your material, but I will say that if you choose to offer some material here, I for one am certainly interested, and I'd rather pay you than pay buyer premiums elsewhere.

I wish you the best of luck in whatever you choose.

In the past year or so there have been articles about a collector in Florida who boasts about having the best Hall of Fame collection and he opened a "museum" in Florida. A quick look at the photos of his collection and it's painfully evident they are mostly bad fakes.

Permalink Reply by Christopher Williams on February 13, 2017 at 4:42pm

As a Fox News watcher, I watched the promos this morning on Fox.

Looking forward to it.