Comes from a very good source. Thanks in advance. 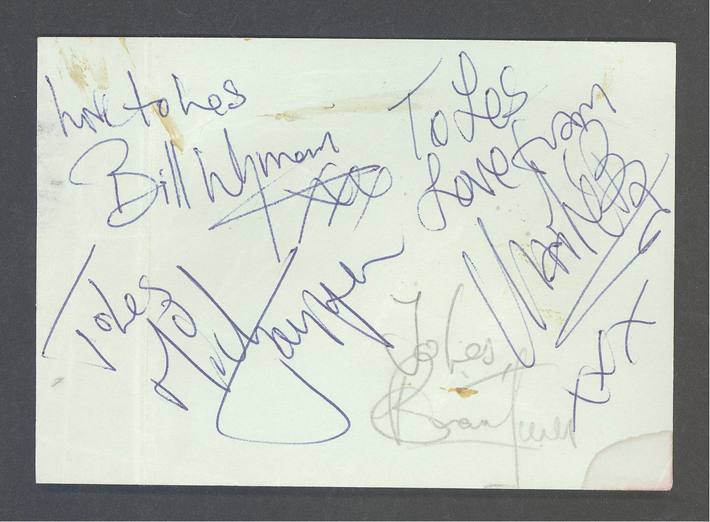 Look at the L and the S (in Les) above Mick’s signature and Bill Wymans.  Look at the L in Les from Brian Jones.  All the same.

No! Each member written Les.

Not referring to the single signed page.  Look at the L in Les from Jagger, Wyman, and Jones.  They each have the little bump in the bottom line of the L.  All three make their L that way, I highly doubt it.

I think you’re right, Steve. The autographs all look right but I'm also sure the same person wrote “To Les” for those three. Good eye!

Sorry but have to disagree on the Les being one hand. The handwriting above each band member is in their own hands. Case in point - why would Mick Jagger write "To" and hand over his pen for someone to complete the word "Les"...same with Brian Jones and Bill Wyman. These are great signatures.

Whilst the L may have similarities, the e and s are all different in the way they finish.

I agree with Mark g! Perhaps they were schooled at the same time!!

Settle down and relax, you seem to be a little too emotional on someone stating an opinion.  I can tell you exactly why I have an issue with the inscriptions, can you be specific and detail why the inscriptions are signed by each artist in their own hand?  No guessing such as “why would someone do that after signing their name”.

It is not for me to guess why someone would do something or not do it.  The L is written by the same person, the e in Les has a very similar angle, size, and flow in a few of the names.  I am not saying that the signatures themselves are bad, just noticing that the inscriptions are too identical.

You have to look for consistencies or inconsistencies.  In this case, there are consistencies that should not be there.  This was signed in the 60’s, most people were not getting autographs to sell.  Maybe someone added the inscriptions because they were trying to impress someone making them think they met the stones personally without realizing they were being devalued.  Maybe someone thought the signatures were fake so they added the inscriptions to make them seem legit.  Who knows.

I’m not disputing the signatures themselves, just making an observation on the inscriptions.

I can see both sides to the inscription thoughts. Looking at strictly the ink, it appears the ink shade and pressure matches each individual signature. I would think that would be difficult to accomplish if added later. I would say the the personalization was written by each individual signer.

Totally agree. Also, based on the way the signatures are arranged, it looks like they were written together with the respective dedications.

The to Les inscription, all in different hand