Since 2013, I've been collecting signatures from actors who've appeared in the films of Stanley Kubrick. I'm a longtime enthusiast and admirer of Stanley's movies and his sense of creative authority and intensity, discipline and artistry is something I look to for inspiration in my own creative and professional work.

I tried to figure out some way of honoring and celebrating the man's work in a more concrete sense beyond mere inspiration. Upon receiving a copy of Taschen's "The Stanley Kubrick Archives," a gorgeous coffee table book, for my 25th birthday, I found out that Adam Baldwin would be attending a local convention in the summer of 2013 just before I would go off to school.

I went to the show, met Adam and discussed "Full Metal Jacket"...and he included his signature on the cover of my book.

From there, the idea of including more signatures grew into a passion project I christened the Stanley Kubrick Alumni Project, where through either convention appearances or mail correspondence, I would attempt to have more actors follow Adam's example and sign the cover.

From 2013 to 2017, the book was subsequently signed by nine more actors bringing the current total to ten. Here is the book cover in its current state: 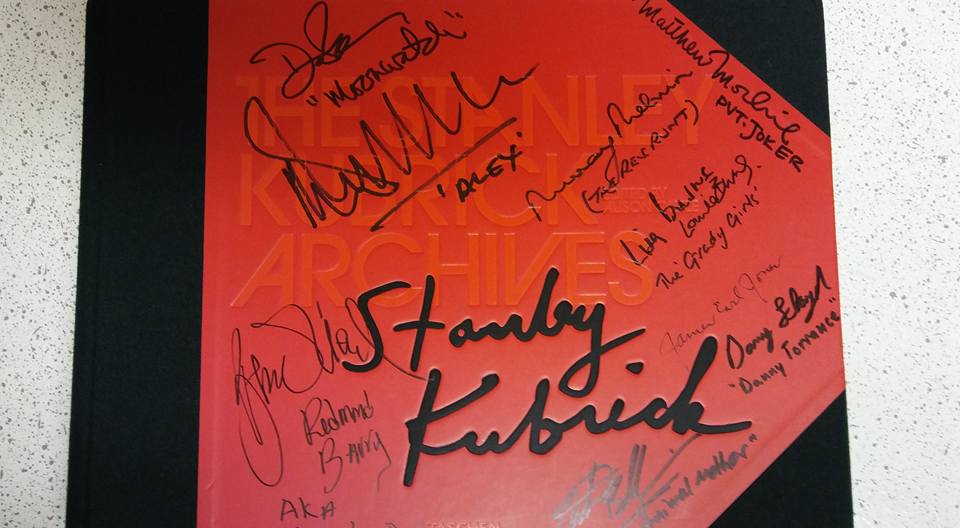 Plans are underway to attend the 2018 Dallas Fan Expo in Dallas, Texas, where it has recently been announced that Keir Dullea and Gary Lockwood from "2001: A Space Odyssey" will be attending. It is my intention for them to sign the cover next.

I have channels of communication, email correspondence and such, in place for actors to potentially sign the book following Keir and Gary, including "Barry Lyndon" actress Marisa Berenson and Nicole Kidman.

If anyone who finds this post is aware of means for possibly having more Kubrick actors sign the book, particularly those hardest to reach such as Tom Cruise, Vincent D'Onofrio, Shelley Duvall, R. Lee Ermey and such, that would be greatly appreciated.

I have a Kubrick signature for sale if any interest?

Permalink Reply by Chas Marshall Blankenship on February 28, 2018 at 6:55am

That would be incredible.

Send me a message to my Inbox with the details...photo, how you came about finding it, price range etc and we can discuss it :)

Here is the Kubrick page. It came from the collection of a BBC doorman who had an amazing collection. I purchased a lot of his collection (Dylan, Pacino, Hoffman, Jack Nicholson, Kubrick, Aldous Huxley, and loads more!).

Permalink Reply by Chas Marshall Blankenship on February 28, 2018 at 9:37am

And it's genuine? It's been authenticated?

I'm just new to this community and to the concept of authentication and such...so naturally wanting to make sure it's real would be the first and most important factor.

You are very wise to ask questions, especially as a new collector. I will just add that Richard has one of perhaps 9 sets of eyes here I pay attention to. Do your homework to your satisfaction, but I think starting with someone like Richard is a good thing.

It has authentication from Adam Andruiser Autographs and came direct from the doorman’s collection.

It is an unusual Kubrick. The shape and angle of the S, and T are unusual. The flow is more polished than I'm used to seeing. It's an interesting one to discuss. Here is a likewise item i have worked on. Was fortunate enought o get a few whom are no longer with us. Would love to add Jack Nicholson and Sue Lyon though i know she is impossible.