So does Babe Ruth’s desirability transcend American sports, and does Babe Ruth’s swagger enter into American pop culture?  You bet it does.  When the movie, Pride of the Yankees (1942), was being filmed, major American movie stars and celebrities were clamoring for the Sultan of Swat’s autograph...not the other way around.  American movie stars were themselves star struck in the presence of Babe Ruth because Babe Ruth was the No. 1 most revered and famous man in America.

Today, the legend of Babe Ruth is as strong as ever.  In a poll conducted just past the turn of the 21st century, Americans were asked to name the most famous American of all-time (excluding presidents).  The top two responses were:  Babe Ruth and Elvis Presley.  Mind you, this poll was taken in the 2000s, not in the 1960s.

There may be some disagreement, of course, but it’s pretty clear:  set aside your Marilyn Monroe and JFK autographs, because Babe Ruth is the Holy Grail of American autograph collecting.  And for a mere $119,995 you can have this nearly-perfect example of a Babe Ruth signed baseball. 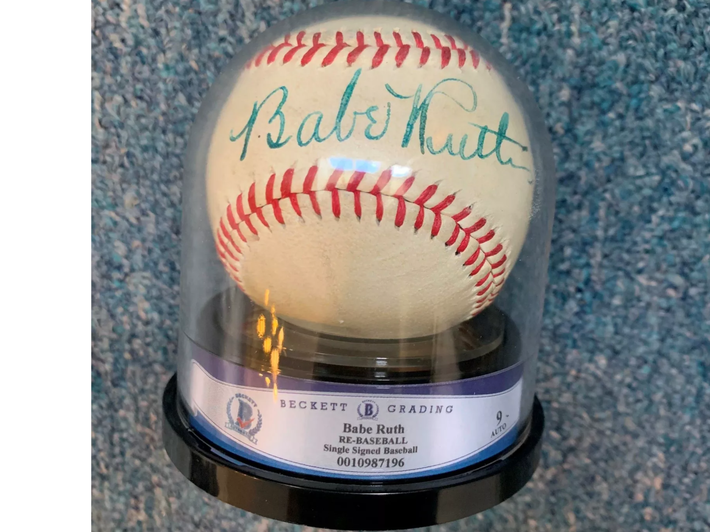 James, this is a great topic, and very well written.  You should post it as a blog.  You can also mention that Babe Ruth is included in United States history textbooks as an essential component of the Roaring Twenties.

Thank you, Mike, for the kind words.  I may look into delving a bit deeper and posting this as a blog.  I had a debate in a YouTube comments section with a man in his mid-20s to mid-30s, I believe, who basically said Babe Ruth’s star power wasn’t close to Michael Jordan’s.  I said no disrespect to Michael Jordan, of whom I’m a big fan, but Michael Jordan wasn’t even the most famous MJ.  That distinction belonged to Michael Jackson!

There’s no doubt Michael Jordan was huge, and still is, but he’s not quite Babe Ruth.  And the thing is, as I said before, Jordan didn’t even dominate American pop culture to the extent that another MJ named Michael Jackson did.

Now...internationally-speaking, I don’t think any artist or celebrity has dominated pop culture to the extent that the Beatles have.  Elvis Presley certainly comes close.  However, I would say globally, the Beatles get the nod.

Great topic! There are TONS of Ruth autographs—but more than 85 years after his last game, still not enough to approach meeting demand.