I can respect what you are saying Jim because you did say  "you think" they are not real. MAybe they are not. I am not a Beatles expert. I looked at some Lennon examples from google and I saw similarities as well as differences in spots. But I have that in my own signature sometimes.

I got a Lebron James autograph on a8X10 in person that he signed with a scribble it looks nothing like any upper deck signature anyone has seen before. It is just a... squiggly line. I sent it to PSA and they failed it. Even though I saw it signed I couldn't get a COA. And they are supposed to be experts.  So just because PSA says its not legit does that not mean Lebron didnt put a squiggly line on my photo?? No it doesn't. So I just hate when people try to definitively say something is fake when really they should be saying "I think it is fake"

I posted the wrong link for the reply above, sorry. Corrected now.

Permalink Reply by Ben M on October 13, 2014 at 2:15pm
Mr Miyagi, I'm very late to this game, but I just saw your post now. I'm a little uneasy with the fact that some of the most highly regarded authenticators are also dealers. These men may be as honest as they come, but when an item isn't yours, it's only natural to lean towards not authentic as opposed to an item they can profit from. I have had highly respected authenticators fail a Muhammed Ali and a Robert Plant that I have witnessed. I'm hopeful that someday a technology will be developed that can determine authenticity with extreme accuracy. As it stands now, a 'false negative' can cost a collector thousands of dollars.

I do understand and totally agree with you on this the conflict of interest. I have come to learn and see that the truly knowledgeable and professional autograph authenticators are able to deal with this issue. It would be pretty rare to see one of the highly respected autograph authenticators selling forged material at this stage of the game. It all comes down to trust in your seller, If you have trust in the seller, a receipt, a money back guarantee and a little knowledge of autographs, the deal in most cases will work out just fine.
In this case we are dealing with a known forgery and unlike many, I do not use in " my opinion". I have seen this Lennon signed album cover for over 15 years now,  I have physically examined the autograph and so have a few others, I also know were this item came from and the story behind it.  I have explained the many issues to the seller, Stephen Koschal who agreed at that time and was going to destroy it, but I guess he felt it was time to clean out his closets.

Permalink Reply by Ben M on October 14, 2014 at 4:13am
Michael,
I wasn't commenting on the autographs in this post. The Beatles aren't even close, and post-Beatles Lennons are too hard for me to judge, unless they're really bad like the one you uploaded below. I have been fascinated by and collected autographs since I was nine years old in 1964 and got Bobby Hull's autograph. It's very sad to me that such a charming and noble hobby has been poisoned by forgers. I do extensive research now before I buy anything, and even then I'm hesitant to buy no matter how reputable the dealer. I often wonder what percentage of the time the best authenticators make mistakes. 10%? 20%? We really have no way of knowing for sure.

I am sorry, but they are not authentic autographs.

With this hobby even the so called experts get fooled, This Lennon is as bad as they come and is being sold and authenticated by Stephen Koschal,  by a man that has dealt in autographs for 45+ years. 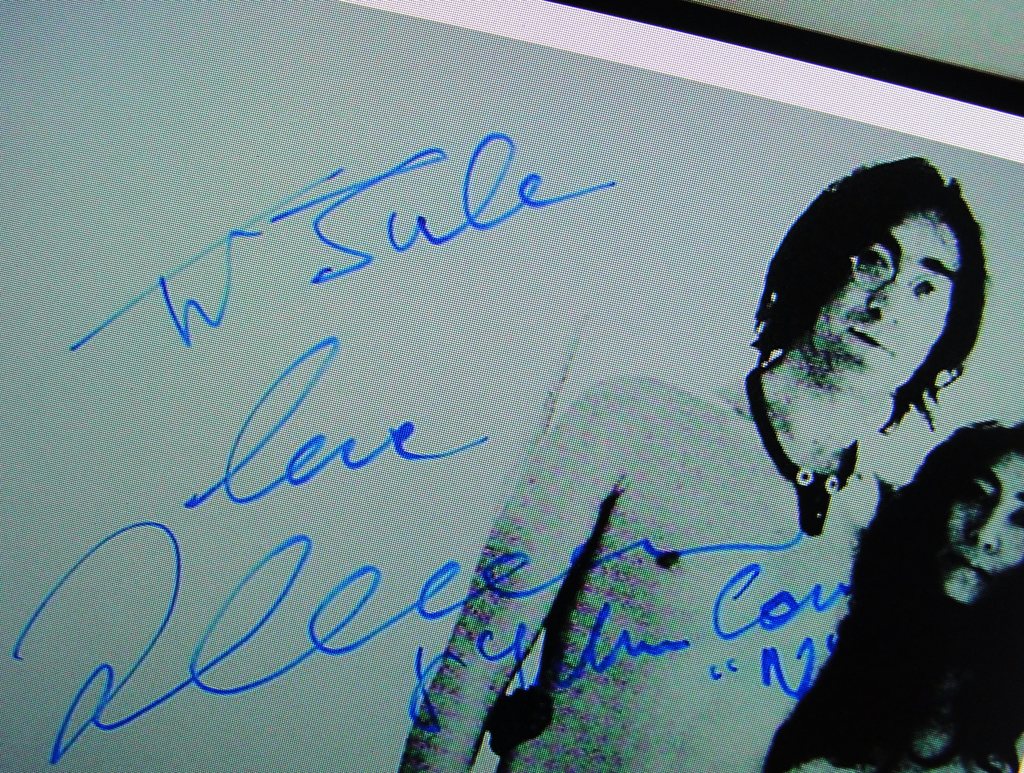 Serving Collectors, Libraries, Institutions, Autograph Galleries and Dealers Since 1967;
The record and album cover are in fine condition. The album jacket shows a little wear. A remarkable collectible..................$9,500.00

I was actually at the live auction where the Lennon was sold. This was in the days before the internet - at least for provincial auction houses in the UK. With only tiny and/or murky book and auction catalogue illustrations to compare to, you were really flying by the seat of your pants in those days.

I was tempted by the Lennon (which went for £560 before Buyers Premium) but there were other Beatles autographs on sale that day and I plumped for a signed Abbey Road (don't laugh). The signatures looked OK to me but now they seem suspiciously "clean" and uniform for a signed album from this time. The price also seems to have been a little too low, though not extraordinarily so for that time (£1,700 before BP).

I have some sympathy with Rob's points. My Beatles photo was torn to pieces when it was on eBay. At the time I felt that I was being got at by some kind of industry mafia, where a few experts controlled the market and would be quick to snuff out any new entrants. Having found this site I realise that most, if not all, the people who were e-mailing me were genuinely trying to protect others rather than their own interests but nobody likes to be told that they have blown £1,000 on something that is essentially worthless.

What would be interesting would be to have some background on the people who opine most on Beatles autographs on this site. Some names come up again and again but apart from a few notable exceptions (Roger, Beatleworld etc.) I have no idea what their qualifications are (dealer, long-time collector etc.).

We could also have a more philosphical debate as to whether a hobby that is so dependent on opinions is really a safe one to be in. Maybe a good subject for a separate and more general thread.

I think most people on this site, or ones I have dealt with are genuine and are out to help others.

Alot of these experts wont have any qualification, just years of looking at Beatles autographs.

Another thing, if people like Tracks or Roger Epperson say its not real...it really doesnt matter if it is or isnt as no-one else would ever touch the item again (unless they to are experts).

Your best bet is to study autograhps and hopefully get a better understanding of what to look for. I am no expert, but some autographs you can tell are fine with one look...others I normally get a second opinion from friends on this forum.

I agree that neither of these is authentic.

With regard to the Lennon, I believe that the signature and inscription (including the "S" in "Sam") are based upon this authentic example: 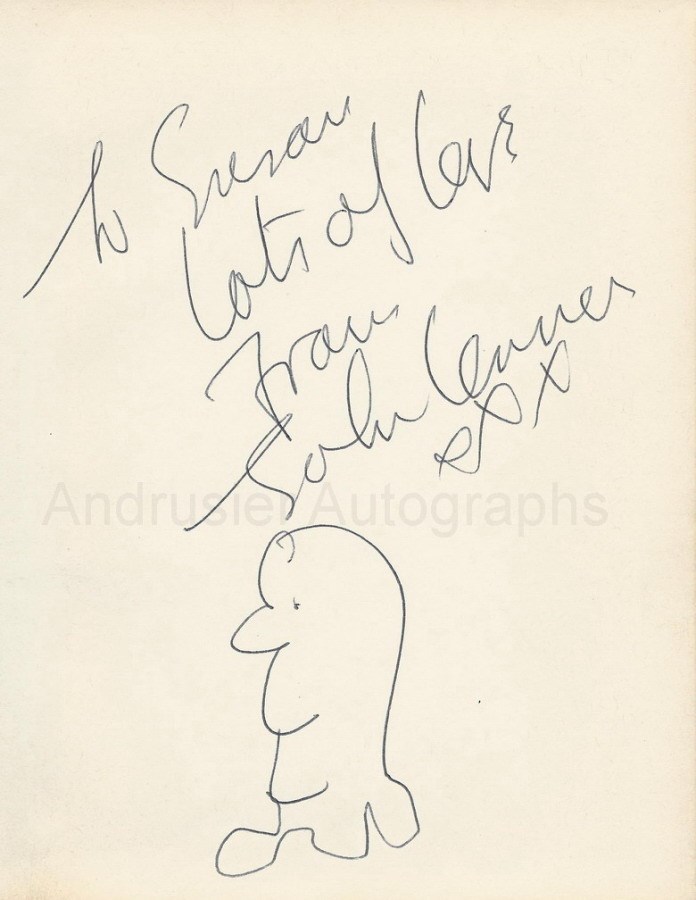 Here they are for comparison: 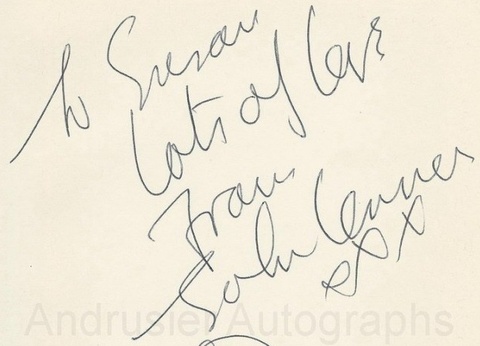