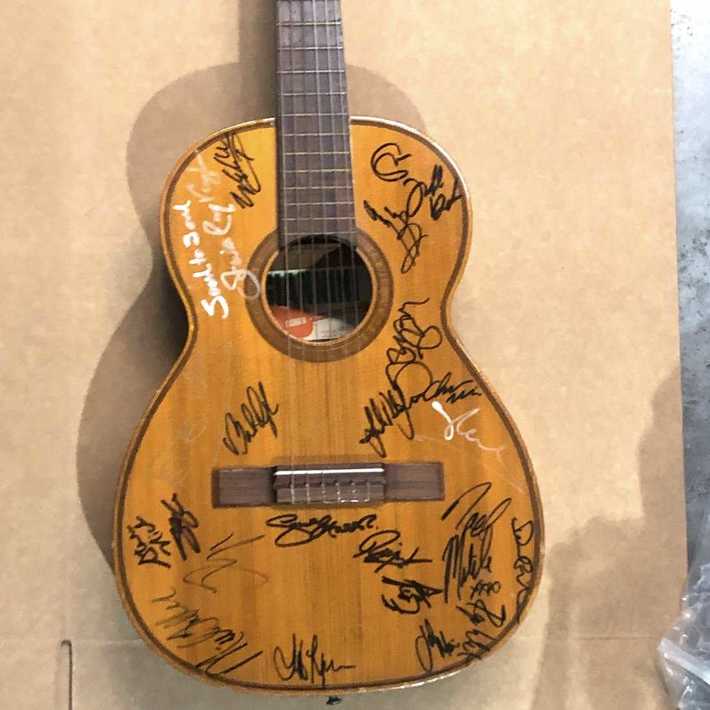 other forgeries -- nothing even close to real.  Live Auctioneers hosts Laguna Beach Auction House on their platform -- both companies should be investigated and shut down.

Unbelievably bad. At least they acknowledge that it’s madness.

Here's their "disclaimer" --  This item comes with a Certificate of Authenticity from a third party forensic authenticator. This Certification of Authenticity does not imply that the item will be certified by any other rival authentication companies. The accompanied certification is the only certification the auction company can confirm. These items are being sold as collectable pieces and there is no guarantee that this item can be resold on any online marketplace.

I believe it’s owned by LuxeWest, too, like High End Memorabilia. It looks like it came from MMP Collectibles aka Autograph Collector’s Guild aka Autographs Authentication Store aka Brian Burkel’s Forgery Factory.

We keep getting the word out about them and he keeps changing the name.

Here's another one in this auction: https://www.liveauctioneers.com/item/70288400_rock-star-acoustoc-gu...

I pass their gallery all the time. If you're ever in Laguna Beach, stop by it. Great photo Steve. I complained about them to LiveAuctioneers and here is their response:

Regarding your authenticity concerns
involving Laguna Beach Auction House and High End Memorabilia. As you might imagine, we take the integrity of the LiveAuctioneers platform extremely seriously and, so, investigate any report of fraudulent behavior. While we certainly cannot police all lots for accuracy as there are millions of submissions of unique items, we have a zero fraud tolerance policy and will examine this issue thoroughly. Independent of our investigation, let me apologize to you for not providing you with the customer experience that we strive to deliver at LiveAuctioneers.

Regarding your submission, we are conducting an investigation regarding the specific claim of forgery but, also, more broadly looking at Laguna Beach Auction House and High End Memorabilia operating practices to ensure that its behavior complies with our standards regarding accuracy and transparency in listing descriptions and photos.

As you might imagine, as a technology provider, we lack the specific expertise on the wide variety of subject matter sold on our platform. Insofar as it appears that you are quite knowledgeable about this subject, would it be acceptable to you if we have someone from our product team reach out to you to expedite our investigation? Obviously, the more details we get from an expert, the easier it is for us to make the decision to stop working with an auction house and/or to take other remedial action.

Again, thank you for bringing this to our attention and please rest assured that we are taking your email very seriously and are acting accordingly.

That seems like a sincere and thoughtful response, Bruce.  Hopefully, it results in appropriate action!

Unfortunately, it may have been a sincere and thoughtful response from Ms. Dela Pieza, but it was not on a LiveAuctioneer corporate level.

After so many collectors came to Autograph Live upset about High End Memorabilia, and some who came to me privately, I investigated them and talked to LiveAuctioneers in late February and early March about High End Memorabilia, telling them what HEM is doing, urging them to investigate it and take immediate action to protect LiveAuctioneer bidders.

But while every LiveAuctioneer employee I talked to cared about protecting bidders, it's clear that the top dogs in their New York headquarters don't give a rats...butt about consumers. Their clients are those holding auctions.

It's safer to buy on eBay than LiveAuctioneers. You have eBay and PayPal buyer protection.

I first talked to a manager there who was shocked and greatly distressed by what High End Memorabilia was doing. She said they take fraud seriously. She does for sure.

She referred me to Phillip Labossiere, LiveAuctioneers's head of client services, and the person who would be most effective at remedying the situation. I like Phillip, but see that he is stuck with the way the company wants to handle things.

Phillip said that the executives in New York have a procedure in how they handle this. It doesn't happen overnight. They had talked to High End Memorabilia before, and they had already scheduled talking to them again later that week. In other words, they'll give them a stern talking to.

It's clear that LiveAuctioneers won't kick a seller off unless they have no other choice.

I emailed Phillip and the other manager early Thursday morning, before I went to bed, to tell them that 673 out of 1921 lots in High End Memorabilia's upcoming auctions starting Thursday, almost all the PSA/DNA, JSA and Beckett lots, belonged to Darren Spannaus, Sig21 on eBay. Darren was CC'd on the email.

Darren didn't consign them, had no idea they were being auctioned by HEM until I told him, didn't know that they had already had sold some of his items, and said never sold anything to them. In fact, almost all were still available for sale on eBay by him.

Oh...and most of the ones they already sold they were selling again.

They are obviously using Darren's photos, and others, to sell forgeries.

We asked them to postpone the auctions until we could remove Darren's lots, and protect bidders.

LiveAuctioneers didn't reply. HEM's first auction of the weekend happened today; they didn't suspend it. At least one item of Darren's was sold.

The winner won't get what they thought they bought; they'll get a fake version instead. LiveAuctioneers could have prevented the winner from being defrauded; just like the could have for the bidders who probably bought six-figures in forgeries since I first contacted them in February.

LiveAuctioneers doesn't care about us, the bidders. They've shown that they just care about their sellers.

If you want a company who cares about bidders, bid on Invaluable. Most ethical auctions are on both platforms.

Whatever you do, I would not bid on LiveAuctioneers.

That is most unfortunate, Steve.  More and more companies are utilizing both platforms and in many cases three (proxibid). However, as they have adopted multiple platforms, costs have increased and buyers premiums have gotten out of control where 25-30% has become the standard.

I shifted away from LiveAuctioneers several years ago after purchasing repro advertising pieces that were described as original.

From my perspective, selling these fakes is a crime and knowingly providing a platform to do this, makes LiveAuctioneers an accomplice.

I contacted steve when they  first popped up privately.  Another pump and dump.  Yes there office is a post office drop box. Also I contacted live auction about them shill bidding there itiems with direct proof from the auction house they wouldn't do anything.

Yes, you did Marc. Thank you.