Hello All, I'd really appreciate some feedback on the Neil Armstrong signature below... This was was found among the personal effects of my recently deceased father-in-law but I'm not sure of the exact timeframe as the letter is not dated.

Any thoughts or opinions would be very much appreciated! Secretarial I think. Ask Steve Zarelli. He is thr best.

Please post the entire letter, too. There will be an education in that as well.

No problem at all, here is the full body of the letter. I would give that a "thumbs up".

It seems to look a lot like these secretarials, esp lower left - I may well be wrong: 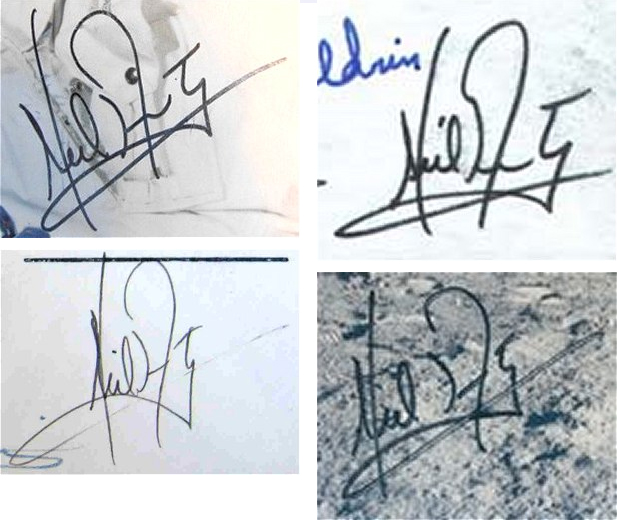 Thanks to those who have weighed in this far.  I don’t have an exact date but I believe this would have likely been received in the late 80s or 90s. I do know my father-in-law knew Armstrong and had business dealings with him (in the aviation industry) so it’s entirely possible his request would have been given more attention than a normal request of this nature.

I’m not sure of his secretarial habits (as my collecting is mostly limited to baseball) so I really do appreciate the feedback.

It may well be good. Lets see what Steve has to say.

As mentioned, Steve Zarelli is the best person to ask. If he doesn't see this here, he has an email authentication service on his website, so you can send it there. He's considered the biggest space expert in the industry.

I'm not an autograph expert, but I am a huge Armstrong fan who's very familiar with his signature. I'm not good enough to be a reliable judge, but I'm leaning toward the signature being real. If you look at the bottom of the letter, you'll see the annotation "NAA:vw". This indicates that the letter was actually written by Vivian White, who was his secretary from 1980 until his death in 2012. Armstrong stopped signing in the mid-nineties, so this can be timed somewhere in that era, just as you estimated. During that time, Armstrong wasn't as hounded for signatures as he was in previous years; and he rarely (if ever) used a secretarial signature at the time, because he had fewer requests. Most of the secretarial Armstrong signatures were done by his official aides at NASA and the University where he worked in the seventies. From 1980, after he hired Vivian, I don't think she signed on his behalf. I believe the letter was typed by Vivian, but signed by Neil. His signature changed over the years, and this looks like one of his later-year signatures to me.

But that's just my amateur opinion. If Steve says it's real, then it's real.

I am moved this discussion to our astronaut and space forum. Steve Zarelli is the moderator and is the top space autograph authenticator. He’ll probably see this and give his opinion tomorrow.

or you could pay him for a quick opinion, which would be the way to go if you want his expertise

Permalink Reply by Christopher Williams on November 22, 2020 at 5:20am