It is unquestionable that Mickey Mantle, Ted Williams, and Joe DiMaggio have been American sports icons since the mid-20th century. It comes as no surprise that these three have been favorites of autograph collectors since the advent of autograph and card shows in the 1980’s. Unfortunately it is equally unsurprising, as attested to in the FBI’s famous 1990s Operation Bullpen, that they are also the three most forged sports autographs. Although most experts believe the forgery problem in sports memorabilia has lessoned tremendously since Operation Bullpen (estimated at that time to be “between $500,000,000 and $900,000,000” by the FBI), sadly large numbers of forged material still exist.


While it would require far more than a single article to educate the autograph collector to detect Mantle, Williams and DiMaggio forgeries, there are some general as well as specific warning keys to these three autographs that may aid in detecting possible forgeries. 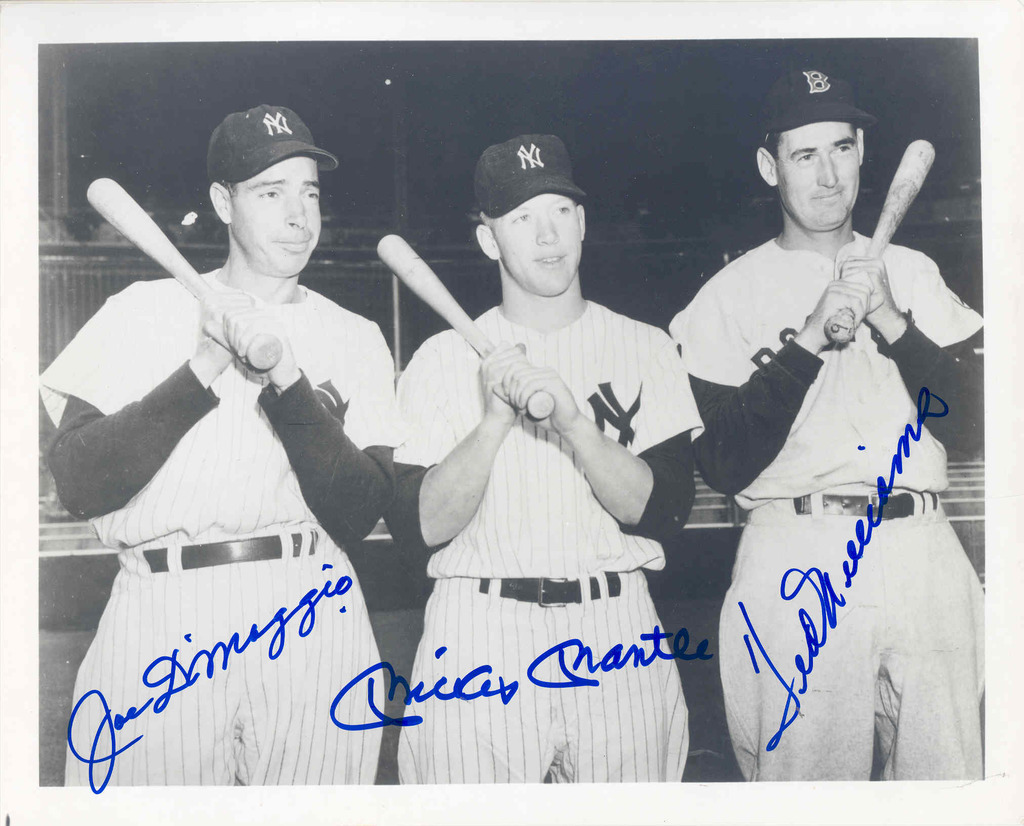 As a general rule, one of the first things I examine in an autograph is its feel – how it was written. When an individual signs his name there should be an easy, smooth flow to the signature. We’ve all signed our names countless times, and we don’t need to think about it. An item we offered in one of our past auctions was a sheet of paper signed several times by Joe Jackson. Jackson, who was almost completely illiterate, actually had to practice, in essence work at, writing his name prior to signing documents. Likewise, when a forger writes a signature, he or she is working at it and therefore upon close examination it’s often possible to detect such warning keys as a slowness of motion, stops and starts at inappropriate spots, and possibly even a shakiness in the writing. An invaluable aid to help detect these keys, taught to me by John Reznikoff of University Archives many years ago, is to turn the autograph upside down. When you view an autograph in an unnatural position these warning keys are often easier to detect.

In addition to such general warning keys there are specific warning keys, unique to an individual’s autograph, to keep an eye out for.

In the 1980’s and 1990’s Mickey Mantle stated on numerous occasions that he was blessed to be able to earn more money signing his name at one single weekend show than his father had earned in an entire year working as a coal miner. Because of this Mantle always felt his fans were deserving of a clear, elegant signature. In authentic Mickey Mantle autographs Mickey would always end the “y” in “Mickey” on an upswing, and because he would be quickly flowing through his signature, he therefore started the “M” in “Mantle” on a higher level or plane than he had started the “M” in “Mickey”. Most forgers, because they were “working” on writing Mantle’s signature, would pause after completing “Mickey” and begin anew in writing “Mantle”, therefore placing “Mantle” on more of a straight line with “Mickey”. If one places a ruler or sheet of paper straight across the item Mantle signed (not straight across the signature) all that appears below the ruler or paper of an authentic Mantle is the bottom portion of the “M” in “Mickey”. In the case of most forgeries the ruler or paper completely covers the entire signature. Another difficulty forgers have with Mantle’s signature was his unique way of looping the bottom portion of his “M”. Such curved lines were executed in one easy movement by Mantle, but are most often elongated by forgers who again are “working” the signature. Such slow, elongated forgeries are especially easy to recognize on baseballs as their curved surfaces only add to the forger’s difficulty.

In the case of Ted Williams autographs, with the exception of the capital “W” in Williams, Ted would consistently make the size of all the letters in his last time nearly the same exact size. Most telling is the “illia”, with the “l”s just ever so slightly taller than the “i”s, and the “a” as tall as the “l”s. Try as they may, most forgers simply can’t undo years of training and habit causing their “l”s to be significantly taller than their “i”s, and their “a” significantly shorter than their “l”s. Williams also connected the “W” in “Williams” to the “ed” in “Ted” with a swirl that gave forgers difficulty in replicating in the same, easy, flowing movement as appears in authentic examples. Also of interest, in addition to the many Williams intentional forgeries in existence, Williams revealed late in his life that during his playing days his signature on team signed balls was often a “clubhouse” example, not penned by him.

Regarding Joe DiMaggio’s autograph, problems for forgers begin with the first letter in Joe. Like the “M”s in Mantle’s autograph, the “J” in “Joe”, which appears as two loops, a larger loop on top and a smaller one below, were created by curved lines which are the hardest to duplicate without leaving telltale signs of slowness or inappropriate stops and starts. In addition, DiMaggio would pen his “J”s so that the lower loop would be written on top of (literally written over) the upper loop in two places. For some inexplicable reason, a significant percentage of DiMaggio forgeries flow in the opposite direction, with the upper loop covering the lower one. An inexpensive magnifier or jeweler’s loop will aid in viewing this detail. Finally, the general feel of an authentic DiMaggio autograph is often somewhat sloppy, in the sense that the spacing between letters is uneven, obviously much more so in his second name. Again due to the fact that forgers are working rather than simply signing, the spacing they place between each letter is far more uniform.

Finally, the age-old adage “experience is the best teacher” is indeed appropriate here. The building of as extensive a library of exemplars as possible, of both authentic and fake examples, would be of help to visualize these and additional warning keys, and tremendously assist in the detection of forgeries.

Fakes that look the same! Authenticated by the same. These are good examplars of Bad Signatures to keep to get used to looking at the J in Joe and the D in DiMaggio and his O. He had a natural ending space in his O and these are off. The Williams is way off also, W in Williams and illiams is too big. Ted Williams Joe DiMaggio Forgery with The fake Scoreboard Coa....At first glance I thought this was real then after examining it closer I saw the pressure points were off and then I saw the COA. I remembered the scam of the Scoreboard Holo COA. These will definitely fool someone who doesn't study  Autographs before buying.

Guys, I am new to the site but not collecting. Through this site I have discovered that one of my baseballs is fake and possibly several others. Thanks for all the great info and keep up the great work. I will continue to read and educate myself to ensure I don't get taken again!

It's nice to know that after several years, this discussion and others like it are still helping collectors.

Early Mantle on a 53 WS game used ball. I don't know his early stuff real well, but it seems this looks like some PSA/JSA clubhouse Autos I have seen. Never heard of this Troy Kinunen at MEARS or if he is known to be really good. 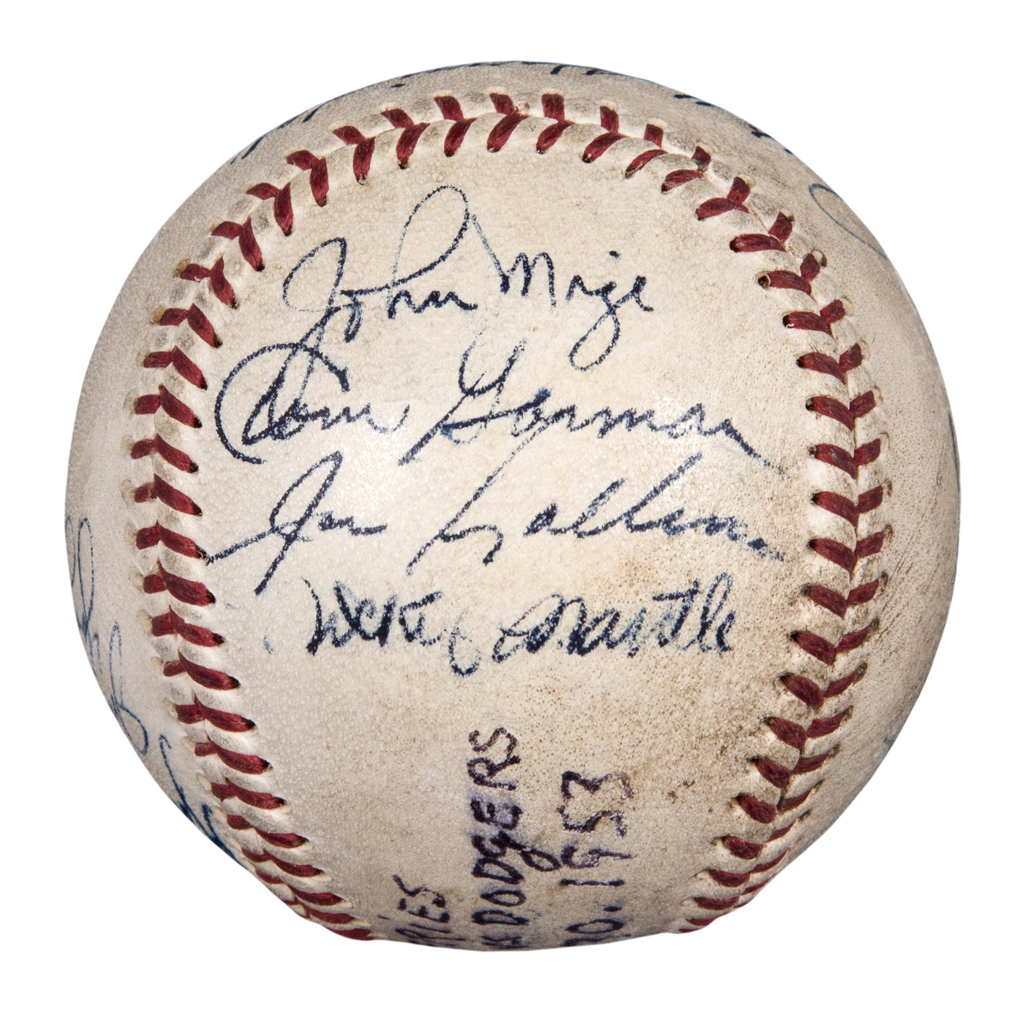 MEARS is top-notch at authenticating game-used equipment, which is what they were used for here. Beckett did the autograph authentication, and they're very good as well. Steve Grad with Beckett most likely authenticated this ball for Goldin.

Permalink Reply by Mwat9050 on November 12, 2017 at 12:38pm
Unbelievably amazing thread here guys. I’m about half way through it and I’ve learned so much! Thank you all!!

Mwat9050, when you get a chance, please read related threads below.

Permalink Reply by Mwat9050 on November 12, 2017 at 12:45pm
Thanks Christopher!! I’m going to read them now! All the info you guys have provided has been amazing. So great to have guys like you in this hobby!