Reality stars: Are they REALLY worth getting autographs from?

OK, let me get this out of the way right off the bat... I'm not a reality TV junkie. When I turn on the TV, I watch shows like "House," "24" and "Lost." You know, shows that are well-written with great actors... TV the way it used to be before network executives got stupid and filled their timeslots with people who do nothing but fight, argue and throw tantrums.

50 years ago, we had Bob Hope and Lucille Ball. Today, we have Jon and Kate. Not exactly what I'd call… Continue

An Education -- Not in signed books!

I just saw the indie film "An Education". Emma Thompson is amazing in everything, as is Alfred Molina.

But the young girl in this steals the show. You'll be hearing about her during Oscar time.

Her much older boyfriend (she's 16), wants to convince the parents it's okay to let her go to Oxford over the weekend.

He claims to know C.S. Lewis. The mom states how much the girl loved the book "The Lion, The Witch, and the Wardrobe."

I won't tell you what… Continue

At one of the Indian casinoes in town, in late November, Bob Eubanks and Jamie Farr (Klinger on MASH) are going to be hosting some gameshow type of contest. I'm sure they'd be available for autographs, if anyone is interested. It's at Sycuan.

On TMZ yesterday, they showed baseball stud A-Rod leaving a restaurant. A few other players were leaving, and signed autographs for the 10 children waiting. A-Rod only signed three, before hopping into a car. The TMZ staff commented on how mean… Continue

The Most Interesting Man in the World...Likes to sign autographs!

You've all seen the commercials. The Dos Equis beer spots, where actor Jonathan Goldsmith walks around, as a narrator says he's the most interesting man in the world. I believe they give him a different name. Something that sounds Latino. But I'm not positive on that.

Goldsmith was featured in the Parade, syndicated newspaper magazine in a variety of Sunday papers. Someone named Pat Scranton in Lodi, California asked if he was really that interesting. Parade… Continue

Fight Club star Brad Pitt, had his motorcycle get into a fight with a parked car.

He was trying to manoeuvre between cars in LA traffic (gotta love that LA traffic), and his handlebars clipped a parked car. He toppled to the ground after swerving to avoid hitting another car stopped at a light.

No ambulance was needed, but a tow-truck was. His bike wouldn't start, and the tow-truck took him and the cycle home. I'm guessing the driver also got an autograph, although...no… Continue

I just saw the documentary More Than a Game. I actually enjoyed it a lot more than the critically praised "Hoop Dreams" from a decade ago.

It showed LeBron James in high school, and even years before that, playing with the same group of kids. It was so interesting following their stories. One kid was only 4'10", and the crowd laughed when he entered the game. Until he made six 3-pointers in the span of about five minutes!

It was great watching the boys being asked to sign… Continue

I was able to attend the 2nd home Pre-Season game the Pacers had vs. the Rockets at Conseco Fieldhouse in Indianapolis on October 16, 2009. The game was, really, anything but spectacular. Indiana pulled out the game 119-104, but the stars saw minimal minutes to allow those trying to make the team a final push.

For the autograph chaser, the game turned out to be the perfect place to be. As the players were finishing warm-ups, some decided to sign on their way to the locker room. Rod… Continue

I interviewed Soupy in New York last year, and his autographed photo to me along with a photo of him signing for me can be seen in the April 2008 issue of this magazine under my column the Sci-Fi Scene.

His helper Kathy is emailing me with possible info she may wish fans to know, so I will hopefully post more here later this week.

It was a pleasure meeting this icon of our culture, and I am happy he autographed a few great items… Continue

Martha Stewart -- A Recipe for a Good Autograph

I'm not a fan. In fact, I don't think I've ever turned the stove on in the condo I'm currently living in.

But she came to Costo here in Carlsbad, California, a few days ago.

She signed 1,000 copies of her book, even staying 45 minutes after her alloted time. The publisher said that's a record for the amount of books she's signed at one time.

One lady caught Stewart as she left the store, and she still signed for her. I had always wondered if people did that,… Continue

The Bono i received By Auction....

I have heard from a few people and those who really know him and meet him to the ones that just can look and tell. Steve you have been takin for a ride. When you see someone like a Bono or the Pope or any Holy Person or Saint... You just want somthing to remind you of them. And for someone to Sale a item like this and keep on doing it. all i can say is God will have his way someday also. I dont want to judge anyone, for i'm not without sin myself. I just dont understand why people like hurtting… Continue

My Bono Autograph is it Real or a Fake ? 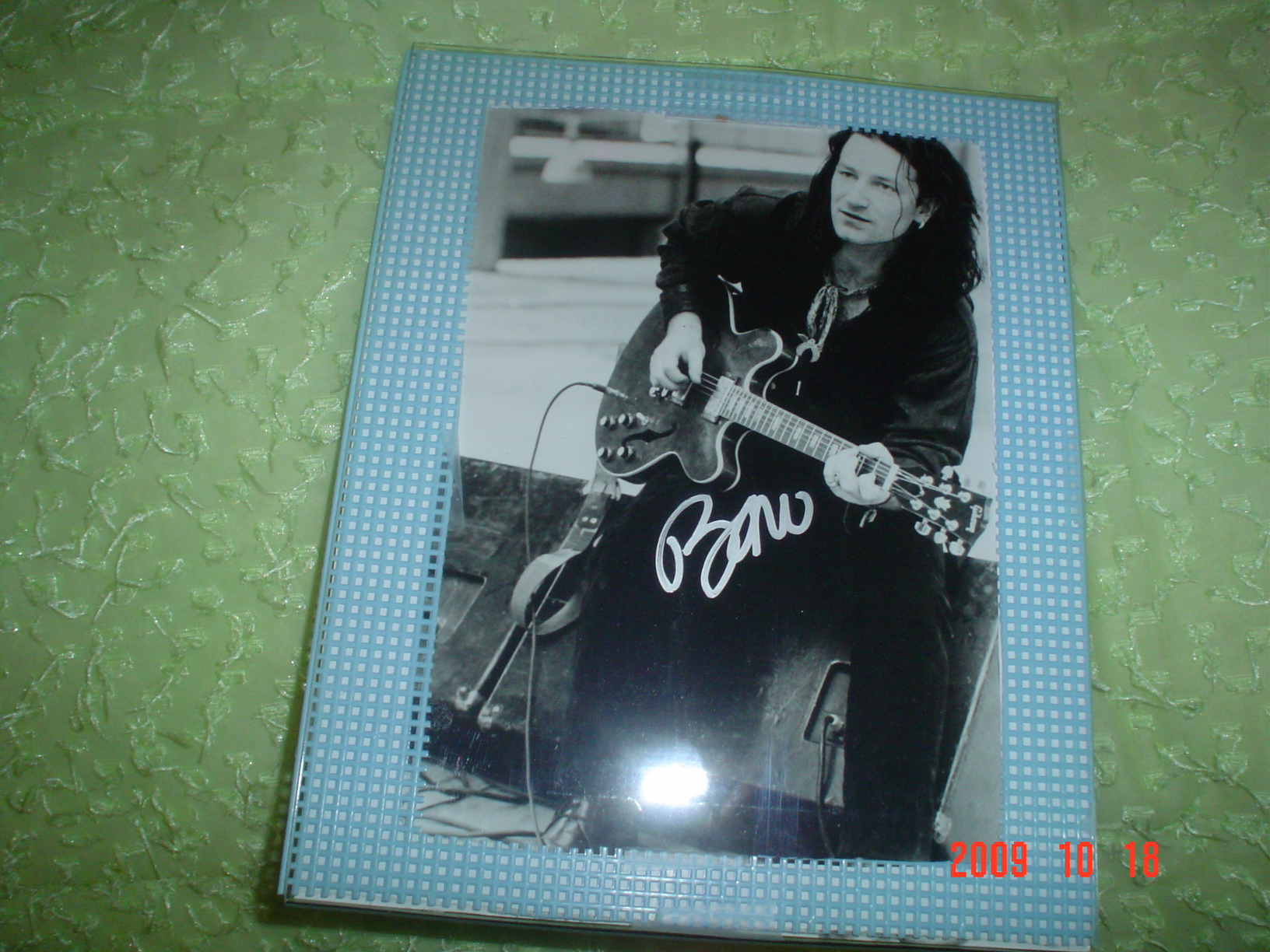 Thank you, so much steve for your help. Now i hope everyone can see my Bono Autograph i won at Fred S. Auction page. And can say is it real or did i get a $31 dollar rip off. Thank you all for looking and giving me your insight. Bless you all. Thanks for helping those in need and of a disablity... steve mills, ky

This blog is gonna lack substance. Hey...it's after midnight (isn't that a song?), my back hurts from trying to play basketball with people half my age (I just turned the big 4-0), and...well...I don't always have gems, folks. So take what I give ya, and shut up already!!!

On TMZ tonight, they were showing video of Gerard Butler. They seem to get him on that show a lot, and he's always nice and playful with the parazzi -- a great sign for autograph collectors.

Auction items -- From the King to Babs

So, Elvis Presley's hair pulled in around $17,000, from the barber that shaved him before the Army.

I've told this story before, but my friends mother was a barber. She cut Elvis' hair in the early 70s, and she kept some of it. When she told her friend, her friend told someone, that offered her a hundred bucks for some. So, she sold some. Then others requested hair. And she saw she could make some money, so you know what she did? She waited until she cut hair from another person that… Continue

To all the U2 Collectors out there !

I need to know from those who have Bono Autographs out there. The way he signs his photos or what ever. I just won a Auction bid and i dont want to post who it is. But i would like too know is mine real or a Fake. Maybe i need to let others know what they may or may not be getting. I have put my photo on here can some one check it out for me. Thank you, for helping someone in need and of a disablity....

All Those Nice People !

When you think about all the really nice stars that i call nice people. Stars that payed there dues to be up on that Screen or Stage to earn the title of STAR ! Some so humble that dont like that word, some still over years and years of there business. Dont forget about what made them famous. There fans , they still need them and write and talk to them. That is a true Star i have meet a few over the years and here in my Out-Reach alot more now then ever. The ones that no what it means to be… Continue

I'm always fascinated when old paintings by the masters, are discovered in some attic or garage sale. Partly because, I realize there's a lot of fraud, and the entire thing can be bogus. But more so because of the possibility, that it could be real.

In Toronto, there's a portrait, supposedly by Leonardo da Vinci. And there's a forensic art expert involved, because there's a finger print that might prove it really is da Vinci.

The drawing is of a young woman, and a Canadian… Continue

Start a James Bond collection TODAY...Or add to your own JB collection.

I thought I would take a dive into the TTM autograph hunt for the first time in AGES once I heard that James Bond himself ( Daniel Craig ) was starring in a Broadway play with hugh Jackman. So, I did the old letter and envelope routine and dropped it in the mail last Thur. SURPRISE!!! 9 days later, I get this back

A VERY nice way to start the… Continue Anyone that is a fan of Joss Whedon and the X-Men, will enjoy this new Omnibus!

Here is one of many places to obtain it.

Here is a link showing some of George Tuska's career in comic books and comic strips as well!

Singer Leona Lewis, a chart-topper more well known in England, was assaulted at a book signing in London.

She was autograph copies of her new autobiography. Witnesses told the BBC that the attacker had waited in line, then walked up with a book. She signed it, and as she looked up he punched her.

I immediately thought of John Lennon, and how the guy that killed him got his autograph on the Double Fantasy album earlier in the afternoon.