Hello. I’ve been meaning to post here for a long time now, but I am just now getting to it. (Sorry for the delay, Steve).…

Hey, guys. Wondering if anyone has an info or experience with OnlineAuthentics.com? Looking to buy an item with their PHYSICAL COA, and wanted to make sure they are legit. When I look up the COA number, it says "Origin of item: Greg Tucker autographs". Let me know. Thanks.

welcome: A little bit about me

Hello. I'm new here but not new to collecting autographs. My main obsession is split between Stephen King and Heavy Metal. I have every King book in First Edition including 3-4 signed items. I have autographed memorabilia from bands such as Phil Anselmo and the illegals, Hellyeah, Soil, Kill Devil Hill, Doyle, Byzantine, and many others. I look forward to getting to know you all and Merry Christmas!!!!! 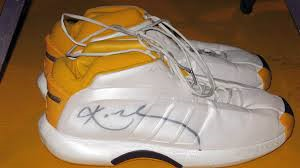 I remember being on the basketball team in 8th grade, when a player on our team told us his dad bought him a pair of $100 Air Jordan sneakers. It blew me away, especially since they were an ugly red and black high-top. I was happy with my $18 Nikes (on sale at Big Five). As a basketball player my entire life, I've never understood the fascination with shoes. Now, I remember…
Continue

Ending the year on a good note

I enjoy sharing my experiences with this blog.  Hopefully, if these artists come to your town you will have the same success as me or in some cases, better success!  I managed to attend a few more concerts to end the year and ended up getting 4 out of 5.

First of all, Carl Palmer from ELP and Asia played a solo gig in Akron.  After the show, he headed straight to the merch table to sign and meet fans.  He had a variety of merch available including posters, drum heads, drum sticks and…

The Musicians of Laurel Canyon and the Sunset Strip.

I'd like people who join this little blog to discuss the amazing hippy musicians who convened on a little town called Laurel Canyon, in West Los Angeles, to play their music together. Let's use our words, pictures and autographs to better describe the music, the scene, the decadence, the alliances and the fallouts of the greatest gathering of talented musicians ever to assemble in one place during such a short period of time.

The music movement in Laurel Canyon was also a reaction to…

Someone asked me about the most important info for the more advanced autograph collector that has decided to expand their collection to include Star Wars. There is so much to know that I feel that this post may ramble a bit as I put things in as they come to mind. Many of the items I will mention are helpful facts for any type of collector.…

We all know about the thousands of forgeries of Mickey Mantle, Joe DiMaggio, Willie Mays, Ted Williams, etc. "authenticated" by Stephen Rocchi and his Guaranteed Forensic Authenticators (GFA) group.

I already posted a thread similar to this one, but decided to post another one.