It was with some trepidation that I went for the “Up Close and Personal with Sharon Stone” stage interview, which was one of the highlights of the recent Singapore Sun Festival.  It was on a Saturday, that was one factor; tickets to the event also cost a whopping $160, that was another factor, (Ok, so I was invited, but still that's a lot of money) but the overriding one was my personal encounter with the aging screen vixen the previous day.

At her press conference, Stone…

Aretha Franklin has the R-E-S-P-E-C-T for her fans that Diana Ross doesn't!

Thanks for your comments about my Diana Ross post last week. I realized that what happened wasn't really as much of a reflection on Miss Ross as it was about her organization, from her security, to her PR firm, to her personal assistant. Maybe they just didn't inform her as well as they should have.

But I must say that last night made up for that. Aretha Franklin, who, sadly, is battling a brave fight with pancreatic cancer, was holding a huge…

Christopher Morales and the sellers who use him claim that as a "forensic document examiner," his "scientific methods" and exhaustive procedures have earned him "court-approval." They say this makes him far superior to any other kind of autograph authenticator.

Forensic document handwriting analysis generally requires at least 10-15 known handwriting samples, preferably from the time period of the writing being analyzed. The "scientific" part is primarily ink and paper analysis to try…

We've Been Sued by Christopher Morales

Last Wednesday I was directed to an article on Autograph Alert that, beyond saying the usual things they say about this site and me, seemingly "outed" one of our members whose comments they didn't like. At the end of the article, they wrote:

"By the time you read this story,
Cyrkin will have the first of a major rude awakening,
one he has invited and is well deserved."

BOOK SIGNINGS: Adding just one piece of memorabilia can be a win-win.

This isn't the first time I have written about this subject, nor I am sure it will be the last.  However, someone PLEASE tell me the reason, other than to sell books and tell a story, does any celebrity write a book?  Having just written one myself, I can tell you that it is no easy process and my book is a very simple…

I need some help understanding this as I'm not a expert on his autograph. Most of the signatures that I see that are authenticated by JSA and PSA if it is just a signature the letters are not capitalized like the ones that you see on his checks, Can anybody tell me why that is  cause Iwould like to add his autograph to my collection.. Thanks for your help

I am just mixed up with this one I would love to add it to my collection and I think that it is a authentic signature but something is holding me back.. Can anybody help relife my fears on this with their take on the signature.Thanks 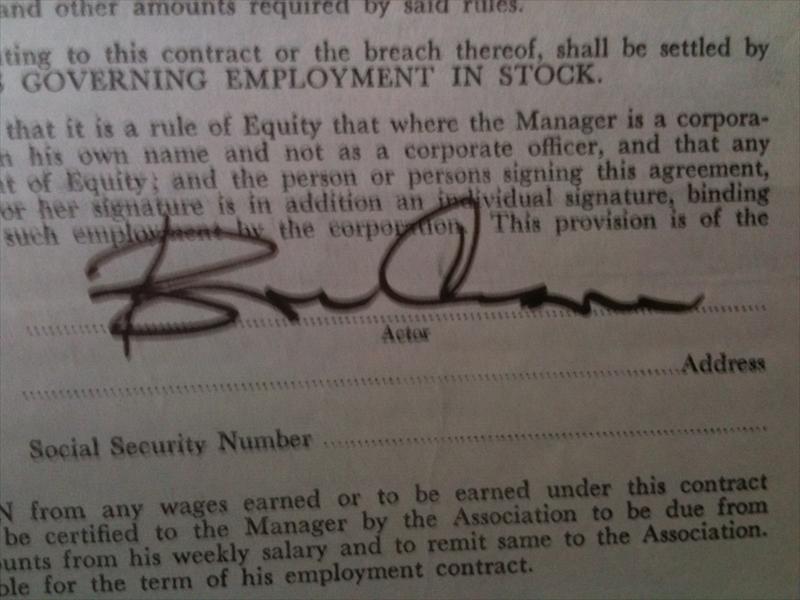 I have plenty of favorite movie scenes..."Call me Ishmael...Frankly, my dear, I don't give a damn...Frenchie, this could be the beginning of a beautiful frienship...", and so on.


My favorites of late:…

An Interview with Diana Ross-FAILED!

About a week ago, I was given some great news. Not only was I going to receive a complimentary media ticket to the Diana Ross concert tonight, but after the show, I was going to be given 10-15 minutes for an interview with Miss Ross, to be held backstage in her dressing room.

Hi, I just purchased a autographed peice with a JSA sticker on it that I have never seen before. Most of the ones that I have seen have a authentication number on and comes with a postcard COA as well,this however just has "James Spence JR " in his style of writting on it no number . Can anybody tell me about this.. Thanks Bill Clinton JSA failed it ,,what do you think 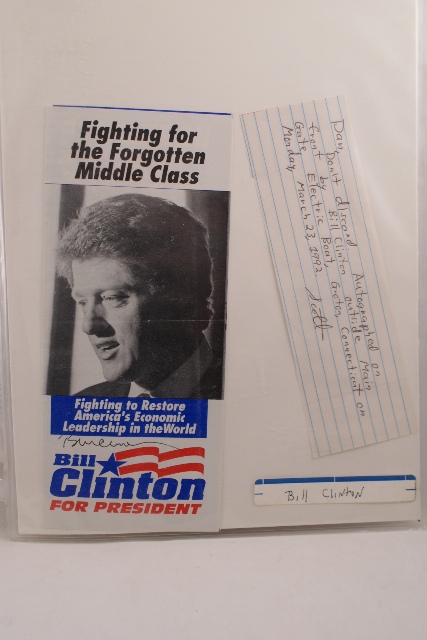 I recently purchased an entire archive of Secretary of the Treasury under Truman, John W. Snyder. Going through this archive has been enlightening on a number of levels. Illustrated here are some examples that will be valuable to Truman collectors and are published for the first time.

This WILL be another great show.

I will attend to cover it! Check it out if you like Faeries, Pirates, Wizards, Dragons, and much much more in this genre!

Plus stay tuned for more info by me on the Farpoint Convention a couple weeks ago.

Who am I? Just got this sig in and it was on back of one I ordered. Thanks for help

Not bad for the collection, what do ya think ? What To Do if You Bought Fake Autographs: Info to help you get your money back

With the expansion of information found on the internet, it's likely that many of these unknowing buyers are going to eventually find out that they've been scammed from one of the many major autograph forgery dealers out there.  With this being said, it's absolutely not too late no matter how much time has gone by for you to seek redemption.

First, be sure the items you purchased are 100% forgeries.  Start by doing a Google search for the seller's name along with the word "Scam" "Fake…

Can someone answer me this question, or give me some insight as to why this is being done?

There is a dealer on Ebay that goes by the name "frogtown". They are a book dealer that has gone heavily into buying autographs at auctions, at prices that are high end auction prices. Once they win the item it is posted on Ebay at an unreal price.

I get the fact that this is good for the auction house, it's seller, and that it's a free country, but "Why?"

My In-Person Convention Show Report of The February Hollywood Show is now on my website under the What's New Section at http://www.toddsautographarena.com. Yes, this was the show which Robert Blake acted insane at. LMAO...

How to buy celebrity autographs and music memorabilia at auctions without getting ripped off.

Assume the autographs are fake.