I would like to have a opinion about a sex pistols autographed lp i have.

Hitler learns his fake autographs have been banned from eBay

How do I get a subscription to Autograph magazine?

It might of been the only ever, public autograph chance to get Davy Jones and Maureen McCormick at the same time, in the 40 years since this iconic photo and scene was filmed: Instead, it was not to be and can never be brought together again. It all was to happen last February 11th and 12th at The Hollywood Show, in Burbank, Ca. Already…

While browsing this website today, I noticed the number of Jimi Hendrix forgeries that seem to be floating around out there, and they are horrendous. A number of people were asking others if they could possibly authenticate their autograph, so I hope this may help in some way.

I received a Jimi Hendrix autograph on June 19, 1969 on a stairwell of Toronto's Old City Hall during a recess in Jimi's trial for heroin possession which I attended that day. Seems he was busted at…

My first thought was "Did Derek change his…

Calendar of Celebrity Autograph Signings for May 2012

I have a really nice autographed 1950 New York Yankees team sheet with 17 New York Yankees signatures and two broadcaster signatures after the Yankees won the 1950 World Series over the Philadelphia Phillies which has been authenticated by PSA.  I am not sure what the value is but would appreciate any assistance.  The signatures include:  Casey Stengel, Yogi Berra, Phil Rizzuto, Allie Reynolds, Joe Page, Billy Martin, Whitey Ford, Joe Dimaggio, Jack Jensen, Johnny Mize, Tommy Heinrich, Bobby…

NHL Hockey mask from AACS are they real?

Since I am new here, I would like to know if anyone good on sports can comment on this?

This is posted on AACS autographs and I have understood that there are questions about their music autographs. Before bid on this I would like to know if anyone with NHL knowledge can comment on this one?

The cost of importing stuff to Europe is costly and I don not want to do it if there is any doubt about the autographs.

Many thanks in advance from Sweden

I recently came across an item for sale on the net with a COA from a company called Hollywood & Sports Memorabilia 120 Ottenheimer St. Little Rock, AR 72201 PH: 501-219-0003 anyone have any comments on this company? Who are their "examiners" and what is their reputation?

A seller from Lower Southampton, PA has recently listed 32 signed baseballs for sale on Craigslist Philadelphia. Every picture of every ball is fuzzy and/or poor lighting. The COA's offered are a few from PSA/DNA ( He even makes a point that one is authenticated by the esteemed James Spence, so he knows his COA's ) some from Grandstand Sports Memorabilia Inc. (What I could make out from one of the certs is possibly the name "Harry Schwartz…

I know this isn't autograph related so I'll keep it short and hope I don't open a whole can of worms but since it IS on the issue of fake crap being passed off as original I thought it prudent to pass it along. What never ceases to amaze me is that these charlatians passing off this junk never do their homework. Sharp  eyes always catch something askew. Take for instance this " Concentration camp uniform". I've collected militaria since I was a kid and learned from my father who was a major… I was reading another blog post last night concerning Derek Jeter signatures that are being claimed by a member on this site to not be authentic. I was born and raised in the…

Can someone help me identify this autograph?

I collect autos through the mail and up until now I never keep track of who I send to. I can tell you its definetely someone in the U.S. Unfortunately thats all ive got.Any help would be greatly appreciated.Thanks… 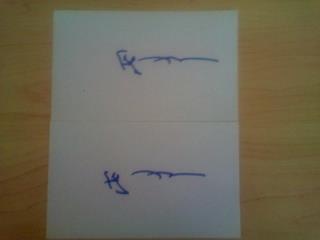 What ever happened with you fight against Toby Stoffa? I see that her COA has diffferent wording now. Please let me know as that I am dealing with her right now.

Do you think this is real

I'm looking at a Dale Earnhardt Sr. autographed diecast hauler signed with a car also signed.The auction no. is 290691337764 It's on EBay for 2 more days I would like some opinions on the signatures if I should buy or not.  Thanks..

I was recently in Las Vegas at Antiquities and being a newby I was excited about seeing all the history in front of me. I purchased a Beatles V1 signed by all four. After getting home, I had buyers remorse. I then began to check on COA,s signed by Chris Morales and found that his authentications have been called into question. I read your article on the Forgers Best Friend. I have since been in contact with the owner of Antiquities, Toby Stoffa by emails. I asked her for a history of this…