CHRISTINE McVIE: Anyone seen her or obtained her signature lately? I have  the 1990 "Behind The Mask" tour book that I got signed during that tour by Billy Burnett, Mick Fleetwood, John McVie, Stevie Nicks and Rick Vito.  It needs Christine McVie to complete.  I am totally sick of looking at this unfinished item for the last 22 years.

Does anyone have an address for Christine McVie?  All I know and have read, is that she is… 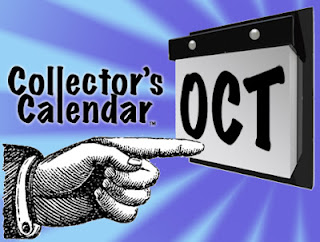 Our October 2012 calendar of selected celebrity autograph signings, conventions, and other events for collectors:
Sign-up for our newsletter at CollectorsShangri-La.com to stay…
Continue

I have a autograph album with baseball players signatures from the 1930's. the album has over 100 signatures. I would like some help on where or who to sale it to. Any help would be greatly apreiciated… 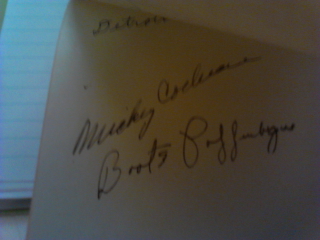 First of all, let me say that I am knew to this site and this is my first post.  I have been a long time reader, but just recently joined.  I recently came across this Vince DiMaggio Signed Baseball listed online.  The ball looks amazing and almost seems too good to be true.  As you all know, Vince signed baseballs are impossible to find and one in this condition is unheard of.  My questions are A.)  Do you think it is real and B.)  If it is real what is it worth.  Any/All opinions are…

The awesome Monster Mania Convention is on the way back THIS weekend 9/28-30th/2012 in Hunt Valley Maryland!

I will be there to cover it and grab some guest interviews!

Check out the link to the show and I will see you there!

After many years of speculation the proof is finally here.

I recently purchased a Matt Barkley signed USC jersey with JSA coa off of ebay. There was no clear photo of the coa, hologram or any mention of the coa number. I did however buy the jersey based on the fact that it was "authenticated" by JSA.

Please allow me to back up just a little bit. I have been collecting, selling and doing autograph signings for almost 20 years so i am in no means new to the whole autograph and…

We all know how hard it is to find an autograph from any of the Eagles members. But here is your chance to pre-order Don Felders new cd with a signed booklet. I think it's a steal!

Since I am no Stones expert, what are the opinions of this Jagger signature on his solo LP?

GOING BACK TO THE PREVIOUS BLOG (CLICK HERE) REGARDING EBAY SELLER steelerfan78610, I HAVE COME ACROSS HIS OTHER EBAY ACCOUNT WHICH HE SELLS HIS FAKES ON. CHECK OUT HIS OTHER ACCOUNT:…

I have 2 NASA collectibles, gifted to me by my late uncle who spent 30 years with NASA (Mercury, Gemini, Apollo missions); that can be validated.  I have no doubt they are genuine, he sent them to me as they occurred.  Due to the forgery discussions, I am interested in other experienced opinions.  First Day Cover signed by all three seems to be pretty valuable; I've scanned eBay for years but only recently saw a similar item with all three signatures.  I can post close-up detailed photos if…

COUNTERFEIT PSA/DNA, JSA, AND GAI ITMES STILL BEING SOLD ON EBAY BY THE SAME GROUP!!!!

We've seen these two forgeries thousands of times, but here's the kicker here.

Then look at the photos and look at the two clown COAs (YMC Sports and Chris Morales) who certed this crap.

Now that's what I call a…

What exactly is this eBay seller doing? Is this considered counterfeiting?

I suggest you review the items for sale by an eBay seller named: presidentialcollectibles

It appears that this seller is using a new 2012 autopen machine and is counterfeiting, ( if that is the correct term?), celebrity autographs.  The seller's description states that, "These signatures cannot be found anywhere else", so it is unclear if anyone else is also currently using this autopen device. Thus far, one can purchase a Neil Armstrong, John Lennon, Marilyn Monroe, Bruce Lee, Babe…

Anyone know who these two guys are? Anyone know this Constance?

Thanks for the help! These are some of the most horrific forgeries you will ever see.  These look like they were penned by a 3-year-old.

The below forgeries are being sold by Ebay seller 2horsecarriage.  They all look like they were penned by the same person.

The one thing I have always said for years is…

Okay I need help with this one

Need help with this one its from 1954 but I can not make out the last name? Sam Levene is on the back which is the one I want but would like to know this one? Bob Dylan signed Tempest CDs for 9.99 at NYC pop up store.  I was 23rd on line.  Unfortunately, there were only 15 signed copies, so the first 15 people on line got them.  WHAT A BARGAIN!

how do i put my autographed pics on for sale

iam new at this

This is one of most horrific team-signed forgeries I have ever seen.

It is listed by Ebay Seller Oksafetyman.  There is actually a bid on this garbage.  These were all penned by the same hand.…